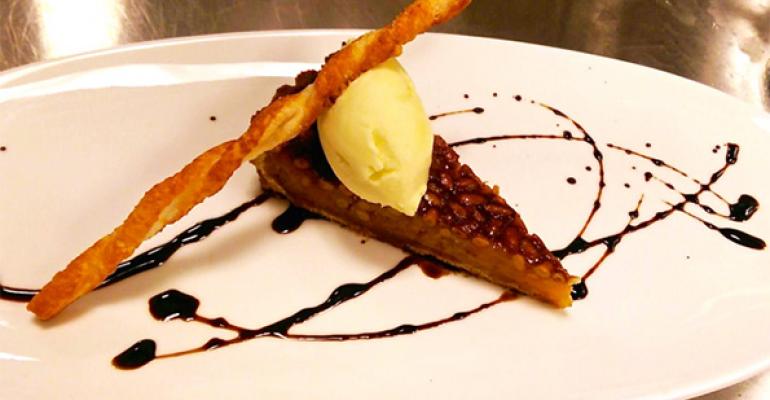 Pastry chef Anne Croy doesn’t crave butter, sugar and cream for dessert. Instead, what she seeks is “flavor, texture and adventure.”

She’s been finding that lately with salt.

At Pastaria in St. Louis, where she is executive pastry chef, Croy recently created two new salty desserts, a Coconut Gelato and a Mango Pickle Gelato.

For the coconut flavor, Croy makes a coconut milk gelato and folds in sliced apricots that have been plumped in apricot liqueur, dipped in Askinosie chocolate and rolled in pistachio dust and Trapani sea salt.

For the mango flavor, the flesh of ripe mangoes is marinated in spices, such as nigella seed, turmeric, mustard seed and fenugreek. The gelato is served layered and topped with toasted cashew shortbread that is lemon-glazed and sprinkled with Kala Namak black salt. Both desserts will debut on Pastaria’s menu in early July.

While Croy has been playing with salt in her desserts for a while, a recent trip to Sicily, where Trapani sea salt comes from, reinvigorated her desire to experiment with varieties of the mineral.

“[People] are finally realizing that, just like craft beer and chocolate, that there are all these interesting salts out there,” Croy said. “Salt sort of points us back to really good, quality ingredients.”

Chefs across the country have been increasingly adding salt to desserts as more than an incidental ingredient over the last few years. According to the latest research from Datassential MenuTrends, the majority of salt found on dessert menus is salted caramel, but salt is also increasingly turning up on in the form of smoked sea salt, salted shortbread, salted brownies and salted pretzel. In the last year alone, salted caramel has grown 43 percent on dessert menus, while salt, excluding salted caramel, has grown 41 percent.

Brothers Piter and Handry Tjan, co-executive chefs at Sushiko in Chevy Chase, Md., have also been getting creative with salt in gelato. In late June, the brothers added a Foie Gras Ice Cream with Pink Himalayan Sea Salt to their menu. The savory gelato was inspired by their childhood in Indonesia and their mother’s homemade coconut ice cream, which included salted roasted peanuts and fermented cassava.

“Foie gras consists mostly of fat, and the richness of foie gras makes it a good match for sweet foods. We found that using Pink Himalayan Sea Salt is the perfect enhancement for the rich ice cream,” the brothers said in a statement.

Bread pudding gets a salty touch at several restaurants. At Sugarmill in Denver, chef/owner Troy Guard uses smoked sea salt inside and on top of his White Chocolate Bread Pudding with palisade-roasted peaches.

For the last six years, chef Ron Eyester has been serving up Sea Salt & Brown Sugar Cookies at Rosebud and Diner in Atlanta. Although the cookies were a hard sell at first, Eyester said they are now bestsellers.

“Traditionally, there has always been a very defined separation between sweet and savory. People generally crave one after the other, usually sweet after savory,” Eyester said. “But perhaps the age of advanced technology and instant gratification has empowered folks to allow the two very different flavor profiles to coexist within one dish.”

Meanwhile, Jennifer Costa, pastry chef of recently opened Centrolina in Washington, D.C., is exploring ways to add salt to dessert without actually using the raw mineral. For example, her pignoli dessert is a pine-nut honey crostata glazed in saba and served with both a puff pastry that has been dipped and coated in salty Parmigiano-Reggiano cheese and an olive oil gelato. Costa says she uses savory or salty components in all of her desserts to elevate the flavors and add a variety of textures and tastes.