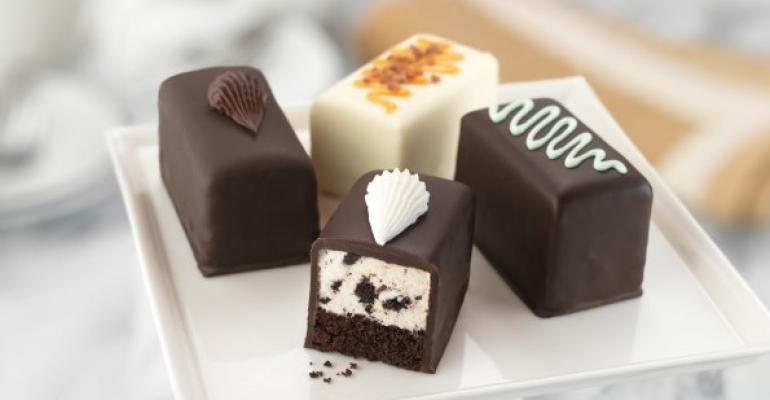 It’s not your imagination — desserts are getting smaller. Shrunken versions of classic American treats, such as cupcakes, brownies and cakes, have been increasingly showing up on menus of late. And consumers are eating up these petite sweets not just after meals, but also as in-between-meal snacks.

According to Datassential MenuTrends, 33 percent more dessert menus feature a miniature dessert option than just four years ago. Dessert miniatures appear on menus in all segments, but most often in quick service, where minis can be offered as anytime snacks, post-lunch or dinner treats or on the go.

Recently the company's Baskin-Robbins chain introduced Ice Cream Cake Bites, a next-generation miniature dessert made of cake and ice cream topped with ganache currently available in flavors such as Chocolate Mint, Double Chocolate, Oreo and Praline Caramel. Sold as singles or in choose-your-own variety four-packs, most often in the late afternoon, Frankenthaler says the Cake Bites have done well since they were launched in 2011.

“One of the appeals behind the mini desserts and behind Cake Bites is portion control,” said Frankenthaler. “[Also,] whimsy or fun … variety is also satisfying.”

Dunkin has also had success with single serving versions of its larger cakes, such as the Baby Chick, a mini version of this year’s Easter-time Chick Cake, said Frankenthaler.

Available all day in four- or five-piece servings, Muhtar says the minis are doing well, especially the Bananas Foster, which he says is among the chain’s most successful desserts in recent memory. Committed to building on the bites platform, the chain is currently testing Brownies Bites.

Other quick-service chains that have recently added miniature desserts include Burger King, with Molten Fudge Bites and Donut Holes; Dairy Queen, with Mini Blizzards; and Wing Zone, with Dessert Bites in Banana Cheesecake and Chocolate Brownie.

While miniature desserts may appear most on quick-service menus, the strongest growth in the last four years is coming from the fine-dining segment. Seventy-eight percent more fine-dining menus now feature minis, according to Datassential.

Among the many fine-dining outlets tapping the trend is the new Delmonico’s Kitchen in New York City. The modern spinoff of the famous Delmonicos’ Restaurant downtown serves a miniature version of the original restaurant’s popular Baked Alaska dessert in an ice cream cone.

“We noticed in our business people tend to not eat larger portions of desserts,” said Dennis Turcinovic, owner and managing partner of Delmonico’s Restaurant Group. “At the end of the day, it’s not about getting more. It’s fresher, simpler.”

Served two to an order, the restaurant brushes house-baked cones with pear jam and caramel, stuffs them with bourbon ice cream, tops it all with meringue and then torches it. The mini dessert is so popular that the restaurant sells about 60 orders each day.

“They order them all day … after lunch, sometimes they just come to the bar,” said Turcinovic. “We’ve had tourists come off the street and order it.”

Many credit Seasons 52 executive chef Clifford Pleau for starting the mini dessert trend when he launched Mini Indulgences, decadent desserts in shot glass-sized portions, back in 2002.

The minis, which include choices such as Chocolate Peanut Butter Mousse, Mocha Macchiato and Strawberry Shortcake, have been so successful for the healthful casual-dining concept that they remain on the menu today.

“I think mini desserts are wonderful,” said Pleau. “It gives you the chance to have more exploration and more variety.”