Consumers sweet on classic desserts with a twist

Dessert can be a hard sell.

Sure, it’s fun to eat, but it’s an additional expense and is perceived as unhealthful. And while some former nutritional bogeymen, such as butter and eggs, are rehabilitated in the eyes of consumers, sugar remains dieting enemy No. 1.

Nonetheless, dessert consumption has risen slightly over the past five years, and restaurant operators are finding that traditional sweets that surprise customers — but not too much — are moving well.

For example, a traditional cheese Danish might be modernized with Greek yogurt instead of cream cheese, and perhaps a trendy, seasonal fruit, such as sour cherry, suggested Ric Scicchitano, executive vice president of food and supply chain at 184-unit Corner Bakery Cafe.

That’s not to say desserts should be low fat. Although consumer research by NPD said sugar is the ingredient consumers are avoiding the most, fat is enjoying something of a renaissance.

According to menu research firm Datassential, the most popular dessert fat — butter — appears on 20 percent more dessert menus than it did five years ago.

In fact, Scicchitano said he’s reviewing Dallas-based Corner Bakery Cafe’s cookie and cake recipes to make sure they call out those that contain butter.

Classic European pastries such as almond croissants, pain au chocolat and cheese Danish are back again, too, he said, although those traditional items might get a 21st century tweak, such as an emphasis on seasonality.

In the summer, Corner Bakery Cafe turns a classic Bundt cake into something more contemporary — and more likely to be shared on social media — by dredging it in lemonade, studding it with blueberries and frosting it with white icing.

“I see more Instagram pictures of our seasonal things than our regular stuff,” Scicchitano said. “That’s how you get people talking about you.” 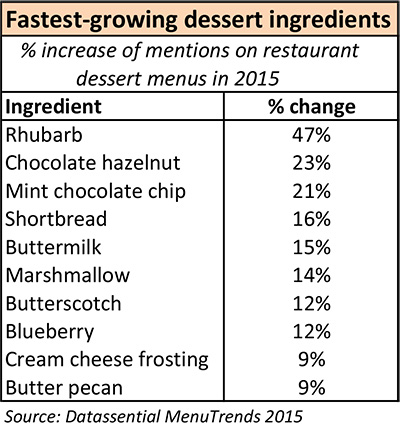 But in line with the modern trend toward customizability, consumers are getting more particular than they have been traditionally, according to Anh-Dao Kefor, brand marketing manager for ice cream chain Baskin-Robbins, which has nearly 2,500 domestic locations, and sells a lot of ice cream cakes.

“Typically with cakes the focus has been on the exterior — what it looks like,” Kefor said. “But we’ve definitely been seeing a shift to customization on the inside, too.”

Baskin-Robbins research and development manager Sara Cox said, “We’ve all had to step up our game to keep up with what consumers are looking for. Back in the day it was, like, a white cake and slap on a message, but now there’s so much you can customize — border color, what type of frosting you use, message and interior.”

When it comes to surprising and delighting customers, Baskin-Robbins found success in October with its Piñata Pumpkin Patch Cake, which had a hollowed-out center filled with M&M’s candies.

“You cut into this cake and there’s this waterfall of M&M’s,” Kefor said. “The whole experience aspect of it takes you further than just the flavor options.”

According to Datassential, many traditional flavors, such as chocolate and vanilla, are becoming even more widespread on menus. So are cinnamon, brown sugar, mint chocolate chip, maple and marshmallow.

“At first, we were apprehensive,” Grapes said, because they thought customers might worry that a sundae wasn’t unique enough for a big-name restaurant. “But we sell a bunch.”

Another traditional flavor, mint chocolate chip, has made its way to the dessert menu of the Castle Hill Inn in Newport, R.I., where executive pastry chef Christina Mercado spins chocolate mint, a varietal of the herb, from the garden into an ice cream that is served with the restaurant’s cookie dough soufflé.

The hotel puts chocolate chip cookies on guests’ pillows as part of its turndown service, and executive chef Lou Rossi found that if they folded egg whites into the batter it made a great soufflé.

“It’s like when you pull fresh cookies out of the oven and they’re too hot to pick up and they start to fall apart and they’re all gooey. It’s like that in a bowl,” he said.

Appealing to a sense of adventure

Sonic Drive-In has been stretching the limits of how eccentric quick-service customers want to get with classic items with its introduction of a line of Creamery Shakes at its 3,500 domestic locations.

“We created a line of shakes that appeal to adventurous foodies, a key audience for the brand,” Scott Uehlein, Sonic vice president of product development and innovation, said in an email.

Those flavors include Wildberry & Lavender, made with blackberries and strawberries; Bourbon Brown Sugar; Dulce De Leche; and Buttered Toffee.

The Oklahoma City-based chain also offers chocolate and vanilla versions, but it specifies that the Vanilla Bean shake is made with Madagascar vanilla beans.

“Creamery Shake flavors have a deeper ingredient story and richer flavor profile when compared to our other offerings,” Uehlein said.

Van Kuch, pastry chef of New York City restaurants The Gander and Recette, emphasizes his desserts’ story with attention-grabbing names, which is why he called his riff on the classic German chocolate cake the Hot German.

“Dessert already in itself is kind of an optional, naughty thing to do, and this is kind of a play on that,” Kuch said. “They’re not supposed to have it, but they want it.”

The dessert is a sort of mashup of German chocolate cake and hot chocolate: a disk of devil’s food cake topped with gelato made of dark brown sugar, condensed milk, pecans and coconut, garnished with chocolate sauce and topped with a maple lace tuile.

Kuch has also found success with his carrot cake sundae, which takes one traditional dessert — carrot cake — and turns it into another one, a sundae.

“So it’s like carrot cake all over your mouth. It’s super delicious and very approachable,” he said.

“If they can’t really taste it in their head, they won’t order it,” he said.

Approachable and easy to make were important qualities in desserts at Slim Chickens, a 30-unit fast-casual chicken chain based in Fayetteville, Ark.

So chief operating officer Sam Rothschild, a culinary school graduate who does most of the chain’s product development, created a line of desserts inspired by Southern traditions and served in mason jars. One is chocolate and the other is a seasonally changing, layered cheesecake-based dessert.

“You want to make sure that when someone puts a spoon in the jar they get all the flavors in one bite,” Rothschild said.

The chocolate version has layers of brownie, pudding, crumbled Heath bars and whipped cream, inspired by Rothschild’s wife Kelly, who used to make it for their kids.

“She used to make it in a big bowl, and my kids and their friends — it was almost like an event when she made it. It was just this monstrosity of chocolate,” he said.

The cheesecake version features strawberries and whipped cream when they’re in season, but Rothschild has rotated in pumpkin pie, Oreo, peanut butter cup and other flavors.

The item sells for $4.99, including the jar, which has the Slim Chickens logo on it to remind customers to come back.

Rothschild added that the logo also seems to boost social media engagement, noting that people post pictures of the desserts on Facebook.

“It’s very inspiring to see how we have such great fans that really engage with our brand,” he said.

Correction: March 17, 2016  An earlier version of this story misspelled Sara Cox's name. The story has been updated.