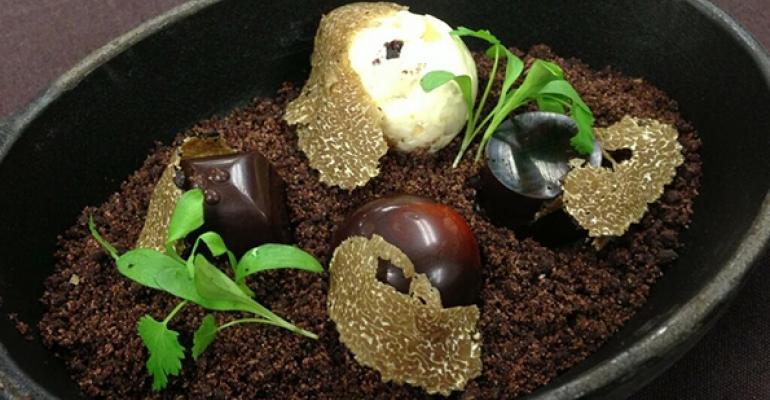 In the past year, fine-dining chefs have been giving the classic American treats makeovers, handcrafting candy desserts that are at once familiar and craveable, but decidedly grown up.

“Candy is still a very familiar product to most Americans, not just kids,” said Darren Tristano, executive vice president of Technomic, Inc. “It’s another way for more upscale restaurants to showcase what they can do.”

At Urban Farmer Steakhouse inside The Nines Hotel in Portland, Ore., pastry chef Carrie Merrill is showing off her chocolate-making skills with the Truffle Hunter Dessert. An artful, edible arrangement of bonbons and micro greens in chocolate “soil,” topped with shaved Oregon truffle, the Truffle Hunter resembles a mini forest where truffles are naturally foraged.

“I love to do chocolates, bonbons, peppermints — any type of candies,” said Merrill. “It’s such an artistic side of our industry.”

Merrill began the restaurant’s chocolate program when she joined the staff about 18 months ago and now makes all the candies for the restaurant and the hotel’s turndown service. She also runs a buffet of candies called the candy bar for hotel events.

Also making a scene of dessert is Ben Spungin, executive pastry chef of Faith & Flower in Los Angeles. His mignardises board features an array of housemade candies, including honey-comb-shaped candy made with real honey combs, chocolate bugs with vanilla-bean antennae, painted chocolates and madeleines, all arranged in a nature scene of sorts.

At the new Barton G. The Restaurant in Los Angeles, restaurateur, designer and impresario Barton G. Weiss offers several candy-centric desserts in keeping with the restaurant’s dedication to whimsy, over-the-topness and the art of being social.

Executive chef Michael Armstrong and executive pastry chef Mauricio Santelice wanted to create a signature dish for Bodega Negra, a modern Mexican restaurant inside the Dream Downtown hotel in New York City. The result is the Don Huevo, a classic dark chocolate molten cake topped with horchata ice cream that comes to the table inside a white chocolate dome decorated with a chocolate moustache and a chocolate scorpion. When hot Negro Modelo caramel sauce is poured on top, the dome dissolves before diners’ eyes.

Other chefs are choosing to raise the chocolate bar, creating gourmet versions of favorite candy bars.

“I frequently look to classic American desserts for inspiration,” Carson said. ”It really seems to resonate with our guests to have something that is clearly elevated and of a very high quality, but still familiar to them.”

And his guests are definitely enjoying it, as Carson says the upscale candy bar is a bestseller, both in the plated version and the smaller patisserie version.

“The Boca Candy Bar is a whimsical dessert,” Lieb said. “It takes a very familiar dessert, rich with American cultural history — the candy bar — and adds just a touch of fun and glamour.”