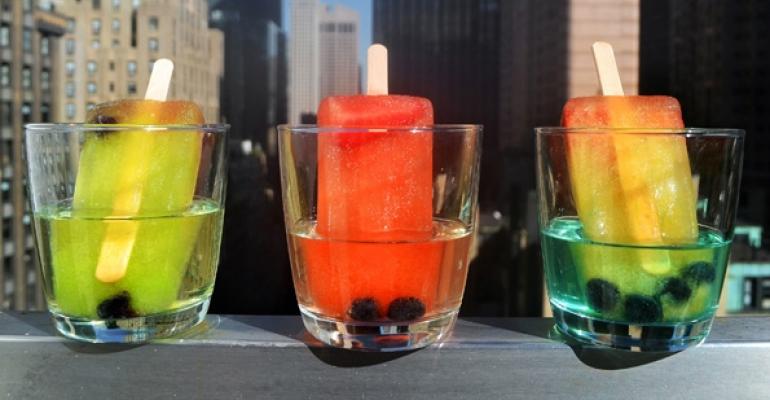 The popsicles popping up around the country this summer are a far cry from the familiar fluorescent, mass-produced freezer pops of the past. They’re artisanal pops handcrafted by chefs with a passion for fresh, seasonal ingredients and a desire to serve up a little nostalgia.

“I’ve never seen anyone eat a popsicle and not smile,” said chef Rob Newton. “That’s a good way to end a meal.”

At Newton’s Nightingale 9, a Vietnamese street-food restaurant in Carroll Gardens, Brooklyn, the only items for dessert are popsicles. Using seasonal ingredients from local farmer’s markets, Newton handcrafts his frozen treats in flavors such as Thai Basil, Tamarind Lime with Coconut, Caramel Palm Sugar and Vietnamese Coffee and Condensed Milk. Newton sometimes includes a crunchy twist, adding crushed benne seeds or coconut in the bottom of the container to enable dipping after each lick.

“They’re quick — it doesn’t have to be a big dessert moment,” said Newton.

Other restaurants are serving up frozen nostalgia with a grownup twist, adding spirits to their pops.

At The Anthem, a retro-inspired sports bar in Chicago, fresh fruit and fresh fruit juices are blended with vodka to create frozen throwback pops. Orange, raspberry, citrus or blueberry are served upside-down in a rocks glass for $5 each.

Similarly, Ava Lounge, the rooftop bar at New York City’s Dream Hotel, recently began serving Dream Pops, which are house-made fruit pops served in a glass of champagne. Created by the mixologists at Liquid Lab, the pops are a mix of watermelon, peach puree, raspberry, kiwi and elderflower liqueur. Only on the menu a few weeks, the pops are already selling out every night.

“I was trying to think of something different, something for the rooftop,” said Ric Addison, president and CEO of Addison Hospitality. “It’s working incredibly.”

The demand for popsicles at retail shops is also growing — so fast, in fact, that some shops are opening up multiple locations or larger commissaries to keep up.

For nearly a decade, Dolcezza in Washington, D.C. has been serving artisan gelato made from local fruits, herbs, milk and cheese, both in retail shops and via carts at local farmer’s markets. When customers began asking what was available in smaller portions, husband-and-wife owners Robb Duncan and Violeta Edelman answered by creating push pops.

Now, customers can order any of the shop’s gelato flavors, including Roasted Strawberry, Pineapple Mint and Chocolate Mint Stracciatella, in a smaller, portable portion for just $3. “It’s portable…. It harkens back to being a kid,” said Duncan of the popularity of pops.

Duncan says he sees “lots of potential” in the push pops, which have helped to double unit sales from the farmer’s market carts. The pops are now being rolled out into the four retail shops.

The couple is also preparing to better meet the demand for their frozen treats by opening a 4,000-square-foot gelato factory in November. All the products for the stores and the carts will be made in the factory and customers will be able to watch and sample before they buy.

Though Lil’ Pop Shop opened just a year ago in West Philadelphia, not far from the University of Pennsylvania, last weekend it opened a second location in the city’s South Street area.

“It’s been very popular, ” said owner Jeanne Chang. “I think people like a spin on something that’s been around for a while.”

To create her seasonal, flash-frozen pops, Chang draws inspiration from local farmers’ markets and looks at popular recipes to see what she can convert into a pop. At any given time customers at her candy-striped shops can choose from a freezer case of 20 different pops, including flavors such as Salted Caramel Brownie, Coconut Hibiscus, Red Hot Mango Chile Pepper and Lemon Blueberry Buttermilk. The experience of seeing the popsicles in the shops is also part of the draw, says Chang.

While some may wonder if these pops are a trend that will quickly melt away, Chang doesn’t think so.

“A lot of what we do is like ice cream, except on a stick,” said Chang. “Ice cream will never go out of fashion.”