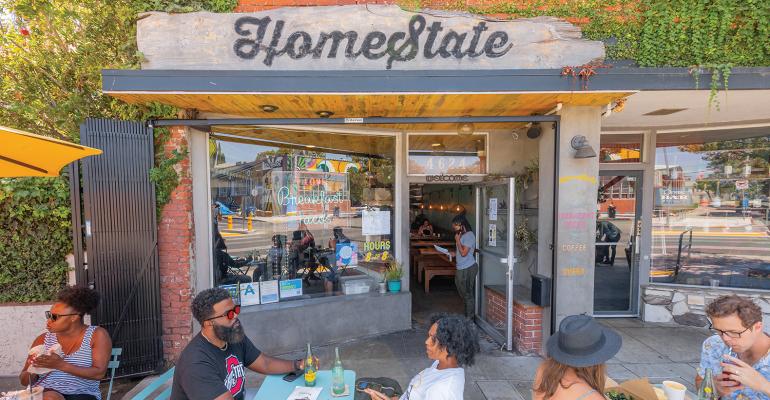 HomeState is known for its community vibes and Texan classics.
Create the Future of Foodservice

HomeState brings Texas tacos and hospitality to the West Coast

When Briana Valdez couldn’t find authentic Texas tacos and homegrown service in Los Angeles, she started her own concept

When Texas native Briana Valdez moved to Los Angeles, she had a hard time finding restaurants that reminded her of home, with Tex-Mex-style tacos and Southern hospitality. So, after years of working with famed chef Thomas Keller at Bouchon, and having been mentored by P.F. Chang’s founder Paul Fleming, Valdez claimed that whitespace and opened the first location of HomeState. The concept is now known for its community vibes and Texan classics like breakfast tacos, Texas toast and Frito pie.

“We really wanted it to be warm and welcoming, like you're walking into the home of a friend or family’s house and you knock on the door and they welcome you inside,” Valdez said. “It’s sometimes hard to access communal spaces that feel welcoming to everyone, that are fun, and aren't a bar. You can come with your girlfriends or with your children or by yourself. It’s a space for everyone.”

HomeState not only fills in the whitespace of authentic Tex-Mex tacos thousands of miles from their origin, but its service model also defies Angelenos’ expectations of what a fast-casual taco place could be.

“Casual restaurant settings of any kind can often be very transactional because that’s the nature of quick-service dining,” Valdez said. “What makes us so unique is we really shy away from that transactional experience, so we have this hybrid model of quick service that’s more personal.”

The success of HomeState extends beyond finding the right queso recipe and serving hearty breakfast tacos with a smile. Valdez says that treating her HomeState employees well is a key ingredient to her business model. HomeState has doubled the size of its staff over the past year and a half, and strongly believes in creating an atmosphere where employees feel just as welcome as guests, with access to fair pay, benefits, and career opportunities.

Over the past year, one of the biggest changes HomeState made was to open an off-site commissary to make the sauces and dough at a different location than the five HomeState kitchens. Although Valdez was skeptical at first, ultimately, she said, the move took some of the pressure off of her staff and helped protect their wellness, which is the No. 1 priority.

In the beginning of the HomeState journey, Valdez opened in a small space that used to be a café, with no liquor license — “We couldn’t sell margaritas!” — and thought the food would only appeal to Texas ex-pats looking for a taste of home. But now, nearly a decade and five locations later, she thinks HomeState has legs to succeed even beyond California. For now, though, Valdez’s expansion goals are mostly local, with locations planned eventually in San Diego, Orange County, and even further into Southern California. In the future, she wants to expand into new cities and states.

“I like to think about Trader Joe’s as an inspiration: Despite having 530 locations across the US and 10,000 employees, it still feels like your neighborhood grocer,” Valdez said. “People who work there are happy, nice and stay for a really long time. … It's familiar and you trust it. Usually, you leave feeling good and nourished. ... That's what I hope for HomeState.”

Nation’s Restaurant News will celebrate HomeState and three other Hot Concepts at CREATE in Denver Sept. 19-21.