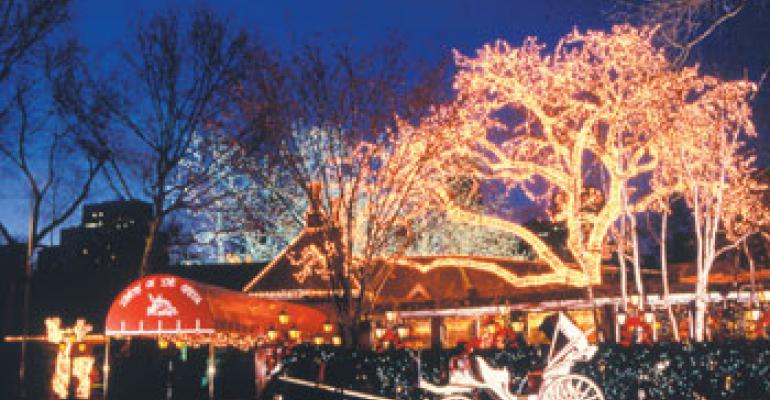 Tavern on the Green goes out with a bang

The LeRoys lost their contract to operate the Central Park restaurant last year when the city's Parks Department signed a tentative agreement with another restaurateur, Dean Poll.

“We watched the old girl go out,” said Shelley Clark, a spokeswoman for Tavern on the Green. She said about 1,700 people attended the restaurant's final festivities on New Year's Eve.

“Some of them didn’t know this was the last party at Tavern on the Green, but by the end of the evening everyone knew and was very excited," she said. "Some people flew in especially for it. One couple from Houston flew in just so they could be there and some others, who had their weddings there, came back [to say goodbye].”

Revelers paid between $135 and $350 to attend the New Year's Eve events, which included a formal six-course dinner and live entertainment in two dining rooms and a more casual, buffet-style setup with DJs in two other rooms.

Tavern on the Green hosted the formal galas and an outside entity held the other events, Clark said. She noted the party was the same type of affair that had been thrown last year, a setup approved by both the former and new management teams.

Clark added that Jennifer LeRoy, Tavern’s chief executive and daughter of Warner LeRoy, the renowned showman-entrepreneur who ran the establishment from 1976 until his death in 2001, did not attend the final night’s festivities.

“It wouldn’t have been seemly for her to be there,” Clark said. “We were feeling internally that it was a celebration of what Warner brought to New York City and made so famous, but, at the same time, 400 people are losing their jobs. She knew those people all of her life and felt it wouldn’t be right for her to be there."

The restaurant faces an uncertain future, with the LeRoys and the city in a legal battle over the establishment's intellectual property, including the Tavern on the Green name. The parties will meet in court for the second time Jan. 12.

Meanwhile, Poll, the restaurant's new operator,  already faces challenges, including the issue of the name and a standoff in negotiations with the union representing Tavern's employees.

Tavern’s outgoing operators, who filed for Chapter 11 bankruptcy protection late last year, will sell off the restaurant’s decor, including its famous Waterford crystal chandeliers and Tiffany lamps, in an auction later this month. The money raised from the auction, expected to top $8 million, will go toward paying down Tavern’s debt.

In its heyday, Tavern on the Green was New York City’s highest grossing restaurant, generating approximately $37.6 million in annual sales.