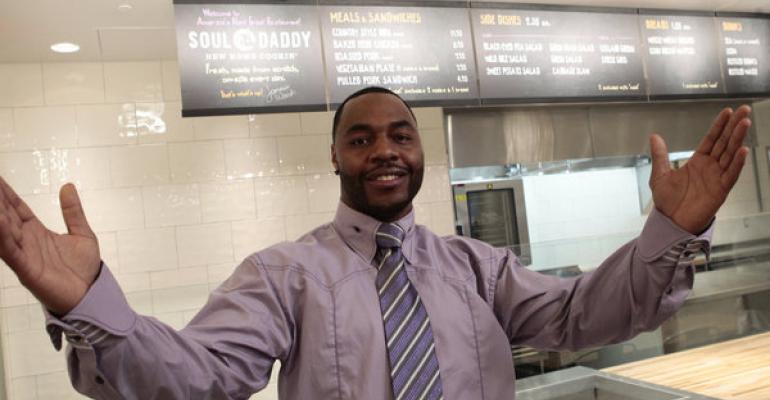 The healthful soul food concept of former Detroit auto worker and caterer Jamawn Woods was crowned “America’s Next Great Restaurant” on the season finale of the reality show Sunday.

Though the season finale of the show was pre-empted in some markets by news of Osama Bin Laden’s death, Woods’ concept was expected to be slammed with customers and fans of the TV series on its opening day in the three markets.

Soul Daddy was also picked as a possible winner by a panel of industry experts who weighed in on the show last month.

Dennis Lombardi, executive vice president of foodservice strategies at WD Partners in Columbus, Ohio, said he wasn’t surprised by the result, but he reiterated the difficulties of opening three restaurants in three such different markets on the same day.

“I hope the investors are active investors because he’s going to need help making this thing survive,” Lombardi said.

Consultant Bob Sandelman, chief executive of Sandelman & Associates Inc. in San Clemente, Calif., said he did think Spice Coast had a better chance of winning, though he acknowledged the food didn’t have the broad-scale appeal of Soul Daddy.

Brooklyn Meatball Co. likely was not selected because its founder Joseph Galluzzi appeared to have the weakest business sense and restaurant experience, Sandelman said.

Woods, on the other hand, likely won over judges with the emotional vote. Throughout the show, Woods said he was motivated by a desire to better support his family.

Soul Daddy began as a chicken-and-waffles restaurant, but throughout the show evolved to become a concept that focused more on the comfort-food traditions of the South with a more healthful twist.