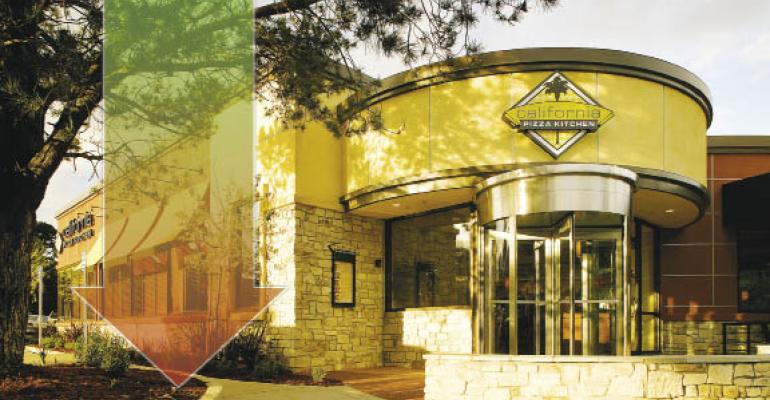 A recent string of disheartening economic reports and soft sales trends at some of the restaurant industry’s biggest chains is mounting evidence that the economic tide has not yet turned and the long wait for recovery continues.

Early sales reports in recent weeks from three restaurant companies, Darden Restaurants Inc., California Pizza Kitchen Inc. and Sonic Corp., indicate that consumers are still being cautious about spending on a meal out. Meanwhile, other reports show that consumers, spooked by a lack of hiring, are feeling less confident than in recent months, and their uncertainty is manifesting itself in drooping restaurant traffic and sales.

Darden, generally considered a bellwether company for the restaurant industry, in late June reported its blended same-store sales dipped 2.3 percent in its fiscal fourth quarter ended May 30 for its three biggest chains: Olive Garden, Red Lobster and LongHorn Steakhouse. In a statement about the company’s quarterly results, chairman and chief executive Clarence Otis said the sales decline was an indication that consumers are still wary of spending.

“The month-to-month sales volatility we saw in our industry during the quarter is an indication that consumers remain cautious,” Otis said in the statement. In a conference call with investors, Otis added that sales have been “very bumpy from week to week.”

For Sonic and California Pizza Kitchen, the latest results seem to trend more down than up, and neither chain is expecting to report a reversal of fortunes any time too soon.

“The state of the economic recovery and ongoing consumer pressures will continue to be a challenge for us in the near term,” said chairman and chief executive Clifford Hudson when the company reported its results in June.

At California Pizza Kitchen, same-store sales for the three months ended July 4 also are now projected to dip between 6 percent and 7 percent. The company previously had projected a drop of just 0.5 percent to 2.5 percent.

The results seem to mirror a trend in the overall industry for May, with more operators reporting a decline in same-store sales, according to the most recent data from the National Restaurant Association. The NRA reported June 30 that 46 percent of operators said same-store sales fell in May. That’s up from 41 percent who reported negative sales a month earlier. In addition, 43 percent of operators said their traffic declined in May, up from 39 percent who reported lower traffic in April.

Given the most recent economic indicators, those numbers may not be much of a surprise. Unemployment is still hovering near 10 percent — the most recent reading put the exact rate at 9.7 percent — and consumer confidence fell sharply in June after three consecutive monthly gains.

The Conference Board said June 29 its consumer confidence index is now at 52.9, down from 62.7 in May. The reading was the biggest drop since February.

“Increasing uncertainty and apprehension about the future state of the economy and labor market, no doubt a result of the recent slowdown in job growth, are the primary reasons for the sharp reversal in confidence,” said Lynn Franco, director of the Conference Board Consumer Research Center, in a statement. “Until the pace of job growth picks up, consumer confidence is not likely to pick up.”

The negative economic news, combined with the weaker-than-expected sales trends at the three chains, led Wells Fargo analyst Jeff Omohundro to question whether the rest of the year could bring more bad news for the industry.

“We are becoming increasingly concerned that restaurants could face a resurgence of consumer and economic headwinds in the second half of 2010,” he said in a note to investors in late June.

The analyst specifically noted that the industry is still struggling with a supply-demand imbalance, despite the closure of numerous restaurant locations. Meanwhile, he added, consumers remain burdened with too much debt.

But not everyone is so pessimistic. Darden, despite its disappointing same-store sales results in its latest quarter, expects sales to pick up through the next fiscal year. The company said it anticipates same-store sales growth between 2 percent and 3 percent at its top three chains.

Tristano said whether Darden and others see gains in sales in the coming months may mainly depend on whether more consumers are finding jobs — an economic indicator that has been stubbornly resistant to change.

“Unemployment is going to drive the success of the industry,” he said. “It’s about getting these Americans employed and putting money in their pockets.”