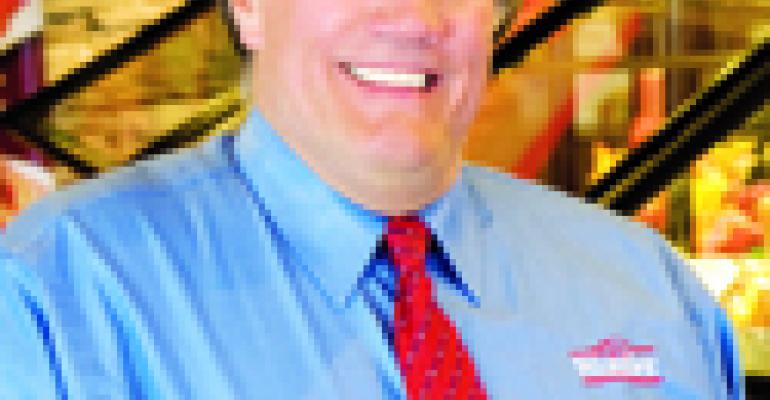 Sizzler chief executive Kerry Kramp stopped by the NRN booth at this year's NRA Show to give readers an update on the chain's brand refresh, which started more than three years ago. The effort that started out as a revitalization effort could soon yield entirely new lines of business for the brand, he said.

For instance, Sizzler's food truck on the Camp Pendleton military base in Southern California already has been a successful test kitchen on wheels and has produced three items that will go into the chain's permanent menu. It's "Weigh to Go" kiosk, where customers can purchase salad, soup and entrees by weight, has been popular in test and will spread to the rest of the system soon, Kramp said.

Most striking about Weigh to Go is that it could possibly form the basis for a new "express" variant for Sizzler, said Kramp. He is keeping an eye on super-competitive segments like the "better burger" fast-casual sector and frozen yogurt — not necessarily for best practices, but for real estate opportunities.

"As the burger concepts grow like crazy, there won't be room for all of them," he said. "We're designing a building that will go into the burger concept buildings when some of them go out of business. ... We're recyclers. What we love about our concept is we can take other people's buildings and turn them into Sizzlers."

The recycling idea extends to buying and reusing perfectly good equipment like grill hoods and soft-serve machines, which Kramp said would be "green" by keeping hardware from going to waste and by protecting Sizzler's margins and lowering build-out costs.

"I have friends in the burger business, and I hope they last forever," Kramp said. "But we'll be buying up some of their stores. ... If they've already spent their money and I can help them out by buying some of their equipment, and we can upgrade our system while being economical, it really helps everybody."

Real estate opening up in competitive segments is the nature of the business, and brands converting former restaurants to their prototypes is common, but Kramp and Sizzler want to get a jump on that process by doing the "creative" part of "creative destruction" now, before the competition shakes out viable locations.

The shrewd move comes after several years of Sizzler strengthening its brand to start growing again.

"We think we got a jump on everybody because we've been engaging with our guests much more than we had been in the past," he said.