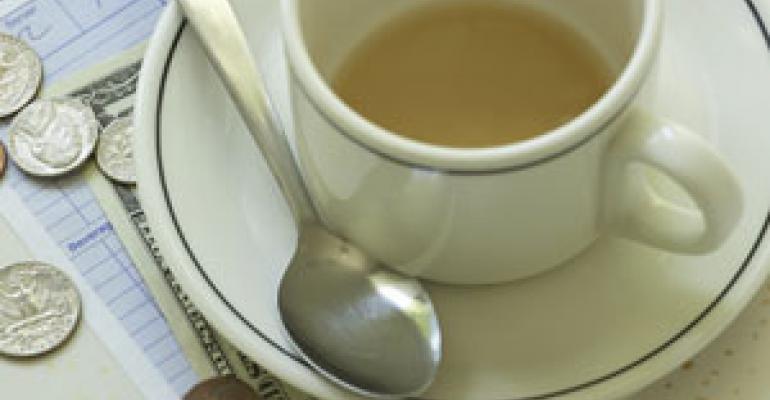 While restaurant operators continue to express concerns about their growth opportunities in the coming months, consumer confidence appears to have brightened slightly, according to two key economic barometers published Tuesday.

The National Restaurant Association’s monthly Restaurant Performance Index slipped to 99.4 in July, a decrease of 0.1 percent from June. This marks the RPI’s fourth consecutive decline.

In addition, the RPI remained below 100 for the third consecutive month, which denotes contraction in key foodservice industry indicators, according to the NRA.

Meanwhile, the Consumer Confidence Index improved slightly in August following a decline in July. The Index for August rose to 53.5, up from 51.0 for the month earlier, according to The Conference Board.

The Present Situation Index, a gauge of consumers' assessment of current economic conditions, fell to 24.9 in August from 26.4 in July. However, consumer expectations for economic activity over the next six months rose to 72.5 from 67.5 last month.

“Consumer confidence posted a modest gain in August, the result of an improvement in consumers’ short-term outlook,” said Lynn Franco, director of The Conference Board Consumer Research Center. “Consumers’ assessment of current conditions, however, was less favorable as employment concerns continue to weigh heavily on consumers’ attitudes.

According to the NRA, restaurateurs continue to voice less optimism about their future prospects. “While there were signs in recent months that the short-term outlook may be improving, the latest figures indicate that the restaurant industry’s recovery has yet to fully gain traction,” said Hudson Riehle, senior vice president of the NRA’s Research and Knowledge Group.

“Restaurant operators continued to report declines in same-store sales and customer traffic in July, and their previously optimistic outlook for sales growth and economy softened in recent months.”

The NRA’s Expectation Index, which gauges foodservice operators’ six-month outlook for same-store sales, employees, capital expenditures and business conditions, slipped to 100.0 in July, a decrease of 0.1 percent from June, and its lowest level since December 2009.

Foodservice operators in general are not too optimistic about the economy. Twenty-six percent expect economic conditions to improve in six months, compared with 21 percent who said they expect the economy will worsen in the next six months.

Expectations among consumers appeared to be a little more optimistic. According to the Conference Board, the percentage of consumers anticipating more jobs in the coming months increased to 14.6 percent from 14.2 percent, while the proportion expecting fewer jobs fell to 19.4 percent from 20.9 percent.

Income, however, remains a large concern among consumers, the Consumer Board said. The report found 10.6 percent of consumers expect their incomes to increase over the next six months, while a larger group, 16.1 percent, said they anticipated a pay cut, which could cause consumers to tighten their purse strings.