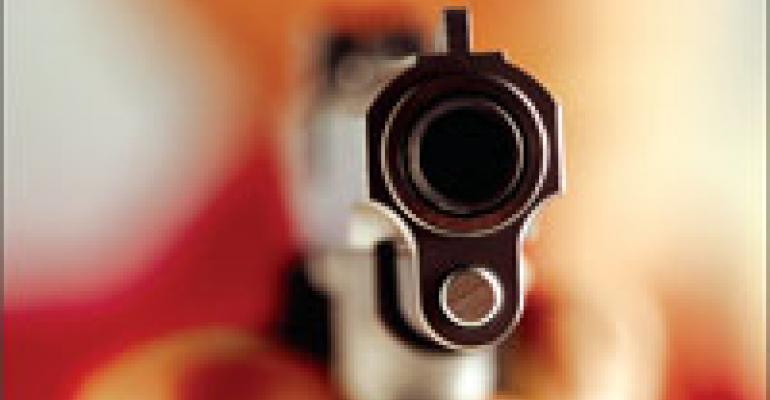 Restaurants open themselves up to greater risks with later hours

But despite that degree of investment and focus, horrific crimes are defeating their best systems — especially with the rollout of more 24-hour locations.

Since 2003, 341 restaurant employees and an unknown number of guests have been murdered on restaurant properties, according to the U.S. Bureau of Labor Statistics. Although the number of deaths fell more than 25 percent between 2003 and 2004, the number is headed north again, jumping nearly 21 percent, from 73 deaths in 2005 to 88 deaths in 2006.

In comparison, employee murders at retail stores dropped more than 18 percent, from 202 fatal assaults in 2005 to 165 in 2006, the BLS reported. The figure for food and beverage store workers fell 41 percent, from 80 killings in 2005 to 47 in 2006. Meanwhile, the number of murders at gasoline stations and convenience stores was unchanged, with 35 fatal assaults reported for both years.

While criminals looking for quick cash have always viewed the restaurant industry as an easy target, the growing number of late-night operations is increasing that vulnerability.

“All the studies I’ve seen say that late-night retail and your business are the leading sites of employee homicides in the U.S., and it’s the No. 1 place for male fatalities in the workplace,” said Chris McGoey, head of Crime Doctor, a security consulting firm with offices in San Francisco and Los Angeles. “And as more chains open 24 hours, we will experience more workplace violence, serious injuries and death in your business, because I don’t think your industry gets it.”

Violent assaults at restaurants and bars reached such a state in the economically depressed city of Camden, N.J. — the fifth most dangerous city in the United States, according to the FBI — that officials ordered all eating places to close by 11 p.m. this summer.

In Seattle, Boston and Vancouver, British Columbia, a spate of shootings, armed robberies and street crime in or near Chinese restaurants is hurting business in those areas.

And few places have it as tough as the tourists hubs of Florida. From Miami to Orlando — the 11th most dangerous city in the U.S., according to national crime rankings — police agencies are working on or have solved at least 13 homicides of restaurant workers or guests, slain late at night or in the early morning, in the past year and a half.

In the most recent Florida case in September, a 43-year-old Denny’s waitress was repeatedly stabbed to death in the alcove of an Orlando unit just before 10 p.m. by her estranged husband.

Experts say assaults by bitter ex-spouses or rejected lovers are almost as frequent as assaults from robberies, which was the motive behind the murder of Betty Jane Wise, a manager at a Checker’s unit in Kissimmee, Fla., a year and a half ago. Although she followed the orders of a gunman who demanded cash from the walk-up window, he shot her dead in front of her coworkers. The killing took place about 11 p.m. on a weekday night.

Her killing was similar to the dual murder of Pizza Hut employees Patricia Oferosky, a unit manager, and Stephen Mitchelltree, a delivery driver, shot dead in an apparent robbery in Terrell, Texas, a Dallas suburb, just before midnight in January of this year.

Customers are hardly exempt from the carnage.

Just two months ago, 24-year-old Daren Dieter was robbed and shot in the neck at 11 p.m. as he returned to his car in the parking lot of a pub where he and his girlfriend had gone to pick up a carry-out meal. Police arrested a man in Georgia weeks later after identifying a suspect on the restaurant’s outdoor surveillance cameras.

While criminals prey on industry operations in the daytime, too, security experts note that the foodservice industry’s high-turnover rate, which can result in poor employee training, and security systems focused more on preventing vandalism than robbery or assaults, are contributing to the spate of late-night crimes.

In a study conducted at the request of Nation’s Restaurant News, the BLS confirmed that nighttime restaurant shifts could be dangerous. In studying the time of day that on-the-job violence occurred, the BLS reported that six cases out of 88 did not note the time of the incident. Of the 82 remaining cases, 58 occurred between 8 p.m. and 6 a.m., and 25 of those occurred between midnight and 6 a.m.

The pattern is similar when it comes to injuries attributable to a criminal act.

Some 990 foodservice workers were hurt in a violent encounter on the job in 2006, nearly three-quarters occurring at night, the BLS said.

Tallying up the number of homicides and violent attacks on restaurant customers is far more difficult. The National Crime Information Center, a bureau of the FBI that culls crime statistics from police agencies nationwide and releases annual and quarterly reports on all manner of crime trends and statistics, does not track crime by economic sectors.

McGoey noted that 341 worker homicides since 2003 in an industry that employs 9.2 million people hardly represents a crisis. Nonetheless, he said, increased vigilance by operators could reduce that number even more.

“[Operators] are 20 years behind the times when it comes to late-night security,” he said. “I made my name working with the convenience store industry in the early ’70s when they started going 24-hours, but they made the investment in systems to protect themselves. Your industry acts as if it can switch on a dime to a 24-hour operation without considering the risks at night.”

McGoey noted the following missteps that can compromise employee and guest safety:

Having drive-thru window lanes in which cars are hidden behind buildings for minutes on end and offer escape paths.

Mike Jank, vice president of risk management for the 520 company stores operated by Spartanburg, S.C.-based Denny’s, said that as a pioneer of 24-hour operations the company and its 947 franchised outlets have learned over time to embrace state-of-the-art technology to secure its units.

But he rued the fact that sophisticated security measures could not save the life of Debra Caso, the 43-year-old waitress who was stabbed to death by her estranged husband.

“Frankly, I worry more about these domestic cases leading to violence than robbery at times,” Jank said. “Because there is no way to prevent a customer with ill-will towards a former spouse or girlfriend from coming into your store, and the worse thing of it is your employees who are having these relationships with these kind of people are exposing your guests to harm, too.”

Jank agreed with McGoey that too many industry players are making the switch to 24-hour operations without giving the requisite thought to the security risks.

“We are seeing more and more competition late night and early morning,” Jank said. “I just hope operators realize they are going to have problems if they don’t keep in mind that the security issues you have in the daytime are far different at night.”

Dave Ulmer, the owner of three supperclubs and nightclubs in Atlanta that close around 4 a.m. on weekends, carries a registered handgun 24 hours a day because of some of the violence that has visited his establishments during his 30-year foodservice career.

A former Bonanza unit manager who remembers when robbers killed seven of his colleagues in a rampage in Omaha, Neb., in the 1970s, Ulmer said he is bracing for an upswing in crime now that the holiday season has begun and so many Atlantans are out of work.