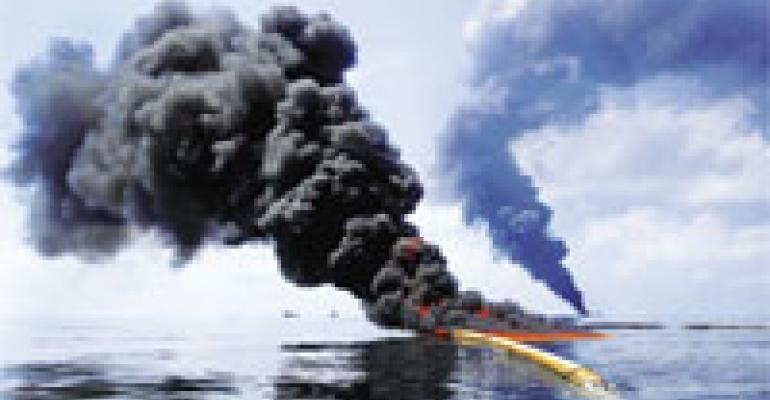 Crews have been working round the clock for weeks to contain the massive oil spill in the Gulf of Mexico, but their efforts have done little to contain fears that the crisis will have lingering repercussions on the restaurant industry.

Even as a 100-ton dome was put in place to control the spread of the crude, operators were bracing for higher seafood prices and a loss of tourism as the toxic slick threatened beaches, fishing grounds and wildlife breeding habitats.

“The oil spill in the Gulf of Mexico and its impact on the cost and availability of food arrives amidst a backdrop of already rising food costs for the restaurant industry,” said Hudson Riehle, senior vice president of the National Restaurant Association’s Research and Knowledge Group.

Even before the spill, prices for unprocessed fin fish were up 48 percent, he said.

Anecdotal evidence also was mounting that some tourists were swearing off an area that has only recently begun to bounce back from the damage caused by Hurricanes Ivan in 2004 and Katrina in 2005.

“Coming at the beginning of the summer travel season, this impact could be serious for the communities that are directly impacted,” Riehle said.

The April 20 explosion on the Deepwater Horizon drilling platform, located 42 miles southwest of Venice, La., killed 11 workers and forced the evacuation of more than 100 others. Two days later the structure, leased by industry giant British Petroleum, collapsed and sank to the bottom of the Gulf. The uncapped well was releasing an estimated 200,000 gallons of crude daily.

“Not to diminish any potential damage to a beach, that’s much simpler to clean up than damaged estuaries,” said Ewell Smith, executive director of the Louisiana Seafood Promotion and Marketing Board in New Orleans. Louisiana is the nation’s top producer of shrimp, oysters, blue crab and crawfish. “You’re talking about breeding grounds that could be harmed for generations.”

When rough seas pushed the oil slick north in late April, the National Oceanic Atmospheric Administration issued a 10-day closure of all fishing grounds stretching from the Mississippi River Delta in Louisiana, to the western Florida panhandle. The stoppage affected about 30 percent of Louisiana’s fishing grounds, stirring concerns of a potential supply shortage.

Jeff Tunks, co-owner of five Washington, D.C.-area restaurants, said, “I’m honestly playing kind of dumb, not calling my suppliers because I don’t want to find out where prices are headed.”

Tunks’ restaurants include TenPenh and DC Coast. As the executive chef at New Orleans’ Windsor Court Hotel in the mid-1990s, Tunks maintains close ties to the Gulf area and buys lots of its products.

“Most of my seafood comes from that area,” he said. “But beyond what it could do to us, this disaster is going to have repercussions for a long time.”

Taking a different tack is Erick Loos, chef de cuisine at La Provence in Lacombe, La., who’s “in constant contact with the fish houses that I buy from.” When he learned that about a third of Louisiana’s oyster beds were closed, he predicted prices would rise sooner rather than later. Shrimp costs were on a seasonal upswing prior to the disaster, and soft-shell crab prices were up due to yields reduced by 2010’s unusually cold winter.

“The good thing is soft-shell crabs freeze incredibly well, and I can use frozen shrimp for the off-season,” he said.

Despite the deepening crisis, Tory McPhail, executive chef at Commander’s Palace in New Orleans, remains upbeat that the calamity will be limited. McPhail insists Gulf seafood is still the nation’s best and is being harvested from zones west of the Mississippi River Delta, which remain unaffected by the spill.

Just after the spill, Fisher bought a three-month supply of shrimp—10,000 pounds—that he’ll freeze and serve throughout the summer.

Mike Foster, vice president of marketing for the Gulf Shores-Orange Beach, Ala., convention and visitor’s bureau, said concerned vacationers are calling constantly for updates. “We’re asking them to be patient with us since we just don’t know what’s going to happen,” he said.