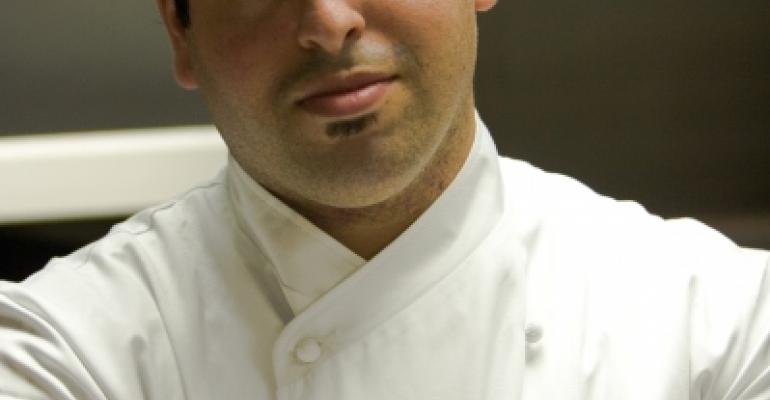 Since restaurateur Matt Semmelhack and chef Mark Liberman are hoping to open a sophisticated, seasonal concept called AQ Restaurant & Bar in San Francisco this fall, they may object to me equating them to my rowdy fraternity brothers, but here goes my analogy nonetheless.

Semmelhack and Liberman have kicked off a Kickstarter campaign to raise $25,000 toward completing the restaurant. Kickstarter is an online marketplace where people can raise funds for any project and ask anybody to donate as little as $1 toward a goal they find worthy. It's the digital version of "passing the hat," which is how my brothers and I would fund off-campus parties during college without misusing chapter funds.

Obviously, these proceeds are going toward much more than a few kegs of Busch Light. But the minimum donations can be as low as the $1 or $5 increments we all put in the hat back in the day. The team behind AQ increases the perks for higher donations, of course. Five dollars gets a "thank you," $10 garners a free sparkling drink at the restaurant's opening, and $20 gets the benefactor a T-shirt. Donors get their names inscribed on a brick on the restaurant's wall for $25, while $50 gets one ticket to a culinary class.

So far, one backer has paid $300 to win a "chef for the day" experience, yet nobody has ponied up $500 to receive a private, candle-lit dinner for two served by the AQ staff at home. Give it time, though.

I've heard of restaurants bypassing banks and funding growth through private individuals before. Two years ago, Washington, D.C., restaurateurs Jared Rager and Eli Hengst approached their community to fund their restaurant Blue Ridge. They sought investments of $5,000 apiece, which would earn an 8-percent return over four years. Earlier this year, when I interviewed Matt Matros, founder of Protein Bar in Chicago, he told me that funding for the second, third and fourth locations of the health-focused concept came in large part from enthusiastic customers.

Deploying this approach on Kickstarter is cool because it allows for many more smaller donations to contribute toward the restaurant, reminiscent of President Obama's fundraising strategy in the 2008 election, built upon millions of $10 and $20 campaign pledges. While AQ's plan does not make all its backers lucrative shareholders, it does make them stakeholders — members of the community who have a vested interest in seeing the restaurant succeed.

Even NRN readers affiliated with giant chains, many of whom reaffirm to staff day after day that growth funding is still hard to secure, could take heart in a campaign like this. There are tools for funding growth everywhere, provided restaurants are willing to chip away at daunting financial goals.