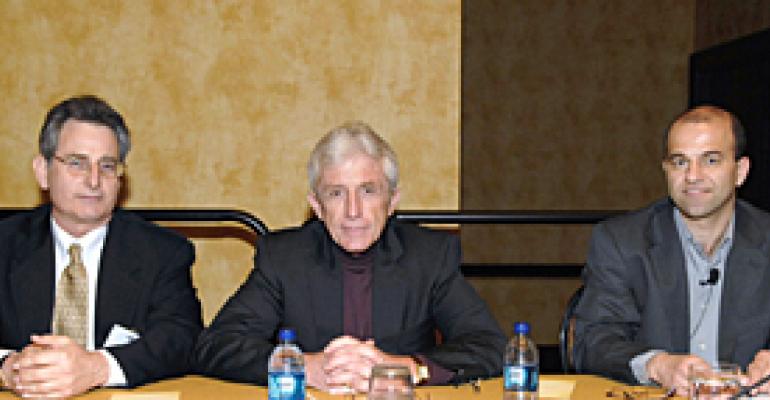 GRAPEVINE Texas While many foodservice information technology departments have been slow to embrace "green" initiatives, and others may not view their cost-saving actions in that light, McDonald's Corp. is among the chains attempting to address environmental concerns associated with IT

"['Green'] is an important subject, and it's only going to get hotter," Youssef told conference attendees during the "Putting the 'Green' in IT" seminar. "McDonald's is ahead of the [foodservice] market when it comes to that issue."

Don Tennant, editorial director of the International Data Group-owned Computerworld and InfoWorld newspapers and online operations based in Framingham, Mass., gave IT executives in the foodservice industry a "C-plus" for green programs. "We always hear [them say] it's not huge for us," he said. "As far as awareness goes, only about 15 percent of companies in the U.S. have 'green' IT plans. We have a long way to go."

Alan Liddle, managing editor of technology and conferences for Nation's Restaurant News, called the issue "timely" but suggested that while the industry could not point to a lot of "green" IT programs, many companies already had initiatives in place that have yielded positive results. "For example, many now have developed Intranets, which help to save paper," and some restaurants are using employee pay cards to eliminate check printing and shipping, he added.

Liddle also mentioned "less obvious" ways some restaurant operators are being "greener" while also improving the bottom or top line. Among them: the use of global positioning satellite, or GPS, and traffic-monitoring tools for delivery operations to help drivers reach destinations faster to save gasoline and time; and timer, reporting and remote call center technologies that improve drive-thru throughput and thereby reduce the time cars idle in line. He also cited software that makes it possible for multiple people to share a single PC workstation at headquarters locations for a reduction in energy usage and hardware purchases and later disposal.

Discussing McDonald's programs, Youssef said the burger giant has been focused on environmental issues for many years at the restaurant level. More recently, the chain's IT department has embarked on its own corporate social responsibility mission by conducting research exploring all parts of the lifecycle of products, from manufacturing to disposal.

He also said that the IT department is examining such issues as energy conservation, waste reduction and new supplier requirements.

Some of the initiatives McDonald's IT department has adopted is to institute paperless accounting reports, ensure that the corporation's standard personal computers are Energy Star compliant, push duplex printing to corporate desktops and laptops, and retire several network printers in favor of one printer per department.

Youssef pointed out, though, that the reduction of paper and waste at the store level "has been going on for years."

The company also has plans to survey strategic suppliers and incorporate environment-related requirements into the procurement process. But that, he said, is only "in the beginning stages. We've only scratched the surface. We've discovered that many of our suppliers — especially hardware suppliers — are ahead of us."

In addition, Youssef said other initiatives include knowledge sharing with like-minded organizations like Nike and Google and using third-party consultants to identify opportunities for assessment and collaboration.

The IT department also is engaging its employees through a "Green" blog and a cross-functional "Green team" that solicits ideas, thoughts and suggestions.

But while panelists agreed the social responsibility component was important at the corporate level, they also emphasized that IT decisions have to make good business sense too.

"You've got CIOs who are saying: 'I'm trying to navigate through a recession. Don't talk to me about recycling toner cartridges,' " Tennant said. "You have to make people recognize that green is the color of money and that you can save a lot. It's okay to think about saving the company money. And when you're saving money, you're automatically helping the environment."

Tennant also cautioned attendees that while the U.S. Congress and the Environmental Protection Agency have not been looking to regulate the "Green" issue, that could change after the next election. "We could potentially be looking at measures in Congress that could become mandatory," he said.

FS/TEC 2008, held April 16-19, was produced and managed by Nation's Restaurant News and Robert Grimes of Accuvia.