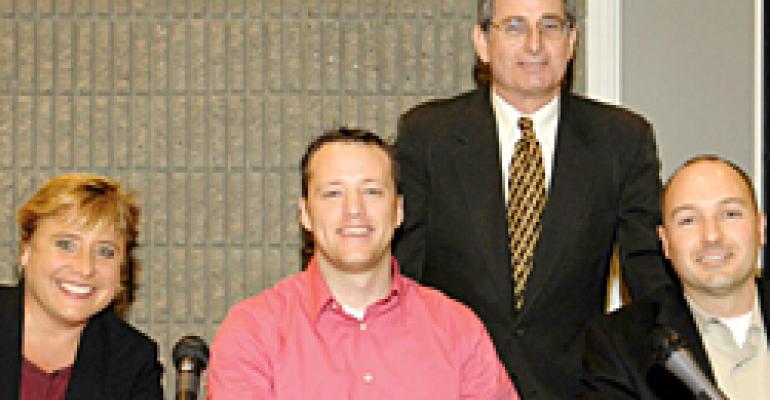 ATLANTA The design of a customer loyalty program is as important, if not more so, than the information system that delivers or administers it, according to operators who addressed "What's New, What's Working in Loyalty Card Technology" during the FS/TEC 2007 conference here.

The marketing justification for loyalty programs is strong, according to Jeffrey S. Gengler, vice president of information technology at the 109-unit Rock Bottom Restaurants Inc. of Louisville, Colo. He cited "the 80/20 Rule" during his part of the FS/TEC presentation that also branched into electronic gift card technology and practices.

"Eighty percent of our business is coming from our loyal customers, who make up 20 percent [of our customer base]," Gengler said. Companies must seize "the opportunity to reward those 20 [percent] and keep them engaged" while trying to drive up activity among the other 80 percent of the consumers visiting their restaurants.

Also on the panel were Regina Jerome, director of technology for Avado Brands of Madison, Ga., and Dan Johnson, director of information technology for the 120-unit Tully's Coffee Corp. of Seattle. In November, Avado Brands, as part of a financial restructuring, sold 83 of 111 Don Pablo's Mexican restaurants and nine Hops Grillhouse and Brewery units.

Relying on VeriFone card terminal technology, Rock Bottom Restaurants has engaged its customers through its Old Chicago Brewery's World Beer Tour program. That program cheerleads customers into buying110 different beers — which, Gengler warned, are not consumed "in one sitting."

The Old Chicago program has three variations, depending on state alcohol beverage laws, and boasts 850,000 active cards generating an average 108,000 transactions monthly, Gengler explained. A similar program in the company's 34 Rock Bottom Brewery units has 584,000 active cards and, on average, is tied to 47,000 monthly transactions.

Customers are awarded points per dollar spent, and those rewards can be used to garner invitations to brewers' dinners, beer-tapping events and appreciation parties, Gengler indicated.

The Old Chicago system started in 1982 with a paper voucher system and a database, Gengler said, and the Rock Bottom program started in 1990 with a mug-on-the-wall system in stores.

The electronic transaction system was introduced in Westminister, Colo., in 2000, relying on a VeriFone dial-up terminal and has evolved into a redundant system with real-time synchronization, Gengler said.

It now includes an email marketing component that has featured bulk-batch uploads of $5 coupons, which Gengler said have achieved a 34-percent redemption rate.

He said Rock Bottom envisions migrating to radio frequency identification, or RFID, technology for the loyalty cards, so bartenders possibly could greet guests by name when they enter the restaurants.

Avado's Jerome said the Don Pablo's Habenero Club loyalty program had been very effective. She mentioned that her chain held to the old axiom that the "cost of entry" for a loyalty program dictates that participants receive, at minimum, a "welcome" bonus, as well as birthday and anniversary recognition and gifts.

"We made the decision when we implemented this program that it would be aimed at guest frequency," she said. "We wanted to increase how many times someone came into a Don Pablo's restaurant."

Rewards include free upgrades to top-shelf products, such as premium tequilas.  "It makes our guests feel special, and it also allows us the opportunity to partner with a vendor to absorb the costs of the program," Jerome said.

"If you limit the focus of your loyalty program just to marketing objective, you are probably selling yourself short," she added. "There are other objectives within the restaurant company that need to be met: first and foremost, training and operations. You can have the slickest, the coolest, the sexiest loyalty club program in the world, but if your average server cannot explain it and can't execute it, it has severely limited results."

Jerome said loyalty card programs must come with internal controls for preventing fraud and simplifying audit procedures. Integration with point-of-sale, or POS, systems helps make that possible, she indicated. Gift and loyalty applications are integrated with the Micros Systems 3700 POS technology used at Don Pablo's and with Aloha POS system used by Hops, the IT director explained.

"Paytronix and Fishbowl talk to each other once a day. And our point-of-sale system is integrated and live with Paytronix all day long. Information goes from Fishbowl to Paytronix and from our POS systems to Paytronix," resulting in "two-way communications on both ends," Jerome said. "All the reporting is enterprisewide, live and up-to-date."

The company found that 60 percent of Habenero Club members spend 44 percent more than other customers. Also uncovered, Jerome reported, was that club participants frequent the chain's restaurants more often than guests who do not take part. She said the Mexican segment usually earns about one visit per customer per month but added that visits rose to 1.6 per month for Habenero Club followers.

The coffee segment also has found that gift and loyalty cards pay off, Tully's Johnson suggested.

The Tully's Card, a gift-and-cash replacement card, was launched in 2002 as a "stand-alone platform" and the loyalty application, produced with Chockstone Inc., was rolled out in spring 2006, Johnson said. He noted that his chain has not integrated its loyalty and gift card functions with its late-model Panasonic electronic cash registers, choosing instead to use VeriFone 3750 card terminals with dual-com modules and high-speed data networks to support the marketing effort.

Beyond rewards-based loyalty initiatives, such as receiving free product or a discount for joining the loyalty program or getting something free once a targeted spending threshold is reached, Tully's has realized strong results from a long-running "10-percent-lift" promotion, Johnson said. Through that promotion, he said, gift or cash-replacement card users receive a credit worth 10 percent of the dollar amount they load on their card — when they load $30 or more at one time.

"What we saw was that the average load [of dollar value onto a card] increased 42 percent," Johnson said of what Tully's found when it analyzed how the 10-percent-lift promotion influenced card users. "We saw that they visited almost twice as often. Additionally, the [average transaction value] increased 7 percent as a result of the promo."

"We really saw a lot of validation that 'Hey, we did something good, consumers really responded,' " the Tully's rep said.

Johnson said that one of the challenges now faced by his company was how to entice even more spending by card users without resorting to a larger percentage premium for loading cards. And he acknowledged that once a company offers a promotion, such as the 10-percent-lift, it must be careful in rolling back or eliminating that incentive, because such changes could leave many users unhappy.

Administering card promotions is relatively easy using card-services provider Chockstone's management software, which clients can work themselves or pay Chockstone to configure, according to Johnson.

On the gift card side, Johnson said of Tully's, "We do a lot of co-branding of cards." He added that Tully's manages programs for other companies that give out the chain's gift cards for "employee recognition."

For example, Tully's works with an unnamed Southern California technology company to produce cards for each employee and to upload $40 a month on those cards, Johnson said. In addition, using an in-house card maker, Tully's will brand loyalty cards with a participating company's logos, such as those used at a kiosk in a Boeing manufacturing plant in Seattle.

— Alan Liddle contributed to this report