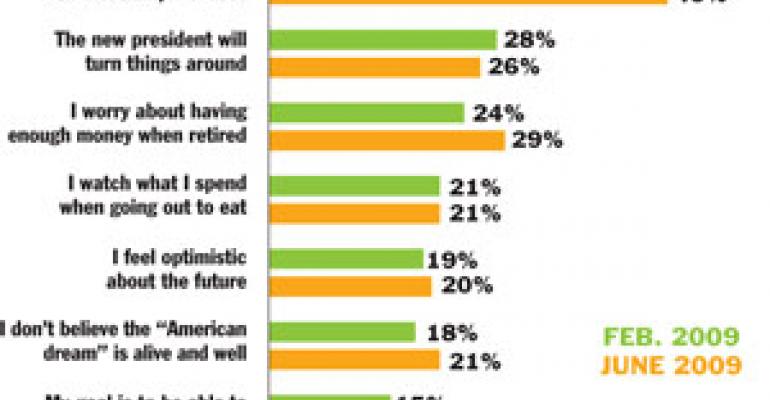 With the prolonged recession starting to feel like an interminable road trip, operators hoping for the beginning of an upswing likely are beginning to wonder, “Are we there yet?”

The answer, according to new data from market research firm The NPD Group, is not quite.

Though there are some signs of improvement, weak consumer confidence and negative traffic trends mean the road to recovery will be a slow and bumpy one, say officials at the Port Washington, N.Y.-based firm.

On the heels of three consecutive quarters of negative restaurant traffic, NPD now is forecasting that traffic will continue to be down for at least another nine months, adding that it will be more than a year after that before the industry finally recovers. In the meantime, to get cautious consumers to open their wallets again, operators are going to have to look beyond short-term deals and offer lasting value, say officials at Port Washington, N.Y.-based NPD.

“Consumers have been hurt worse financially in this [recession],” said NPD analyst Bonnie Riggs. “It’s going to take longer to go back to spending. [When spending bounces back, consumers] are still going to be looking for the best value.”

According to a new report from NPD, “Restaurant Industry…What to Expect When Economic Recovery Begins,” the industry’s recovery time from a recession, or how long it takes to return to pre-recession traffic levels, depends on the severity of the traffic loss during that recession. For example, the last recession in 2001 caused declines in restaurant demand that lingered into 2002 and into 2003. In fact, traffic lagged behind year-ago levels for four consecutive quarters. The data reveal that it took three quarters to recover the traffic lost in the prior four and another quarter to exhibit a demand level inching ahead of where it was two years prior.

Though each recession is different, the current recession is most like the one of 1979-1980, Riggs said. Back then there were many of the same economic challenges seen today, including high energy costs, high gas prices, rising unemployment, a credit crunch and low consumer confidence. Industry traffic was negative six out of eight quarters between 1979 and 1980, and was down as much as 9 percent in one quarter. It took more than two years for the industry to recover the traffic lost during that downturn.

Riggs and others predict that this recovery likely will be longer and rougher than those in the recent past largely because this recession has been both a huge financial and an emotional blow for consumers.

A major indicator of recovery is consumer confidence, which hit an all-time low at the beginning of the year, according to The Conference Board, a global nonprofit organization that disseminates information about management and the marketplace. Consumer confidence improved considerably in May, but contracted again in June.

“The recession and the shock effect of the financial meltdown…added an additional layer of pessimism,” said Lynn Franco, director of The Conference Board Consumer Research Center.

“Given all the other challenges consumers are facing, we don’t expect this to be a [regular] V-shaped recovery with a sharp rebound in consumer spending,” she said. “We expect consumer spending to be weak until the end of the year.”

The survey also highlighted some lingering areas of concern, though. The data show a decline in the number of consumers who believe President Obama as well as the number who say the American dream is alive and well.

Similarly, a higher percentage of respondents who are employed expressed concern about having enough money for retirement. Earlier in the year 48 percent of respondents said they were watching how much money they spent on purchases, and in June that number increased slightly to 49 percent.

Still, there are some signs of improvement. While consumers may be worried about the future of their jobs and falling incomes, their attitudes about the economy are slowly changing, NPD found. According to the data, consumers believe the economy is beginning to improve or, at the very least, is not going to get any worse.

At the beginning of the year, about half of all adults surveyed by NPD said the economy would get worse before it got better. When asked the question in June, just 35 percent gave that reply.

Restaurateurs who have survived other recessions are taking a cue from the past and employing a variety of tactics to make it through this time around.

For New York City-based Union Square Hospitality Group, which counts Union Square Cafe, Gramercy Tavern and The Shake Shack among its more than 13 restaurants, weathering an economic storm is all about doing what you always do, only better.

“What people want in a recession is what they want in good times,” said Paul Bolles-Beaven, president of USHG’s CORE Restaurant Group. “[The question] shouldn’t be, how can I start making money again. It should be, how can I take the learning of the time we’re in—how to stay efficient, lean, and provide better value to our guests—and carry the benefits forward.”

“It’s really simple,” White said. “Money is not the goal. The goal is to make people happy. Money is the reward.”

When times get tough, White says, he reduces his staff at the first sign of the recession, retaining only his best people, and invests more money in his customers through more advertising, marketing and promotions.

While many restaurants have been relying heavily on limited-time offers to drive traffic until the economy picks up, Culver City, Calif.-based Sizzler recently introduced a new value-priced menu intended to be available indefinitely.

“We have changed some [of our] philosophy,” said chief executive Kerry Kramp. “[Our plan is to] hold our prices in line and be reasonably priced forever.”

In order to be able to offer low prices for the indeterminate future, Kramp said Sizzler has worked hard to find ways to be more efficient in its operations, including increasing staff productivity, working with vendors to make efficiencies happen and offering “no trick” value offerings to guests.

But tweaking existing operations isn’t the only solution. To prepare for recovery, California restaurateur A.J. Gilbert, who owns the upscale Luna Park concept in San Francisco and Los Angeles, created a whole new concept, a sports bar called Henry’s Hat. The restaurant was scheduled to open earlier this month in Studio City, Calif.

Gilbert’s goal is to create a concept that relies less heavily on costly overhead such as staff and outside vendors. For example, Gilbert said, the new restaurant will be counter-service-only and won’t take reservations, eliminating the need to hire a staff of servers and use an expensive online reservation service. The menu will be à la carte and feature a select few organic or locally sourced items, making it easy to remove items when commodities prices fluctuate. An in-house washer and dryer will reduce the need for expensive linen services. Also, to eliminate credit card fees and encourage customers to pay in cash, the restaurant will house an ATM.