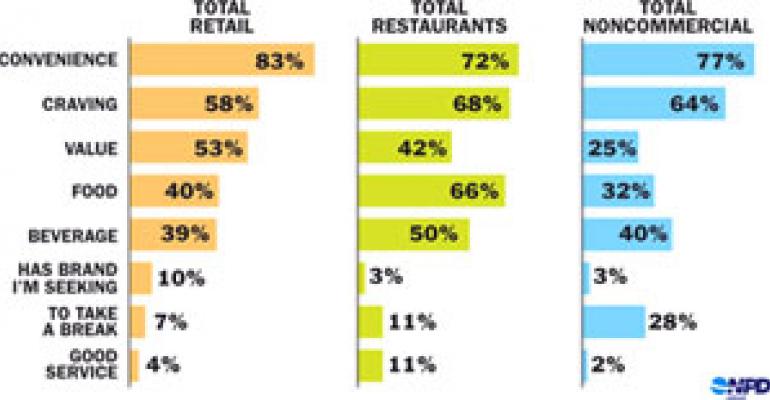 NPD: Snack occasions grow faster than any other daypart

When times get tough, Americans get snacking.

Amid the country’s worst economic crisis in decades, consumers are finding comfort in eating between, or perhaps in lieu of, main meals—and it’s a trend that may continue well beyond the recession as the line between dayparts continues to blur, according to market research firm The NPD Group.

According to new data from Port Washington, N.Y.-based NPD, consumers are making more visits to restaurants during evening snack times than at any other meal occasion. With snack-related visits accounting for roughly 15 percent of total industry traffic and a quarter of all quick-service traffic, this typically discretionary meal occasion is not one that operators can afford to ignore, NPD officials say.

“Typically, snack-related occasions get hit hardest in weak economic times,” said NPD analyst Bonnie Riggs. “The snack occasion has always been considered a discretionary purchase, therefore, [it] was where consumers cut back first. Not this time around. It is the snack occasion that has held up best.”

In the quarter ended in May, snack traffic was up 1 percent after showing no growth the previous quarter. Snack traffic was at its peak in the spring quarter of 2007, when it was up 5 percent. Evening snack traffic has remained positive or flat since, with the exception of fall 2008 when traffic declined 1 percent.

In contrast, rising unemployment is shrinking traffic at both the morning meal, which had been a growth vehicle for the restaurant industry, and lunch, NPD found.

Visits from consumers who were at work prior to visiting a restaurant for morning meal or lunch are down double digits. The dinner occasion has been weak for a long time and has only been exacerbated by the recession.

There is no one reason that snack visits are up, NPD found.

Though comparatively low prices would seem the logical reason consumers—an increasing number of whom are unemployed or fear they may be at any moment—are eating more snacks, price is not the top motivator, NPD found.

“We’re snacking for many different reasons than price,” Riggs said. “It’s convenience and cravings. [It’s] definitely a reversal of what we’ve seen. [Then again], in past recessions we didn’t have the $1 menu either.”

Another reason consumers are eating more in between meals is because the definition of a snack has changed over the years, Riggs said. Once the realm of chips, pretzels and ice cream, consumers now consider a snack anything they consume in between main meals—even if that’s a chicken sandwich or a plate of hamburger sliders.

“People are ordering more substantial foods as a snack, types of foods that could replace a full lunch meal,” Riggs said.

Servings of some foods that aren’t doing well at lunch or dinner—perhaps because of health concerns or the availability of other options—are growing in the evening snack period, NPD found. For example, incremental servings of French fries, which have been on the decline overall in recent years and were down in the most recent quarter at all other dayparts, saw double-digit growth as an evening snack. Similarly, servings of carbonated soft drinks are down at all other meal occasions in the spring quarter, but were the top-growing beverage among evening snacks.

Today’s snackers are primarily women, who are more inclined to order a snack from a quick-service outlet, particularly in the afternoon, NPD found. Men are snacking more, however. Male snack traffic was below average in May 2008, but has significantly increased in the past year. That increase could explain why more snacks are more substantial, Riggs said. Whatever their gender, snackers tend to be younger consumers. The heaviest restaurant snackers are age 18 to 34.

Snacking frequency varies depending on where consumers live. While evening snack traffic was up across the entire country in the spring quarter, it was above average in New England, the Mid-Atlantic states, and the Pacific and Mountain regions. During the same period, snack traffic was below average in the Midwest and Southern regions.

From McDonald’s Snack Wrap and Dunkin’ Donuts smoothies to TGI Friday’s sliders, major quick-service and casual-dining chains have been capitalizing on the snack trend for several years. While many operators have followed their lead, others are going in a new direction altogether, offering a snack menu all day or offering a menu of small plates or snack-sized items in lieu of a traditional menu of appetizers, entrées and sides.

To meet consumers’ desire to eat around the clock, Jasper White, chef-owner of Jasper White’s Summer Shack, a four-unit casual-dining seafood concept with locations in Massachusetts and Connecticut, has employed what he calls the “Chinese restaurant” approach, offering a full snack menu all day long.

“Americans are total snackers,” White said. “I noticed lately, especially in the summer, [that] people are eating [more snacks]. [We’re] doing better in the 2:30 to 5 p.m. slot than we have in the past.”

The increase is particularly evident at White’s new Summer Shack Express location in the Mohegan Sun casino in Uncasville, Conn., where the menu includes smaller portions than at his fullservice restaurants.

“There’s no doubt I’ve seen [traffic grow],” White said. “More people are grabbing a cup of chowder or some fries.”

In early 2009, eight months after opening H5O Bistro & Bar in Portland, Ore., it became clear to executive chef Nick Yanes that it wasn’t just the economy that left his 74-seat dining room empty at lunch and dinner while the bar was packed at happy hour and into the evening. To solve the problem, Yanes changed the structure of his global American menu, offering a variety of small plates instead of full-sized entrées. He also added six tables to the bar area.

“We’ve been able to capture a lot more people,” Yanes said of the change, which required cutting item portions and prices by three-quarters or one-half. “I think [consumers] will stay with the trend of [small plates].”

Offering snack options at a relatively low price is an important menu component now and for the future, industry experts say.

“The only time you hear three squares a day is when you watch a really old movie,” said Dennis Lombardi, executive vice president of Columbus, Ohio-based WD Partners. “American consumers are moving away from three main meals and moving a lot more toward more frequent meals.”

“Consumers today want to have many different options for different occasions and will visit places that they can use for various dayparts, including snacking,” said Linda Duke, owner of San Rafael, Calif.-based Duke Marketing.