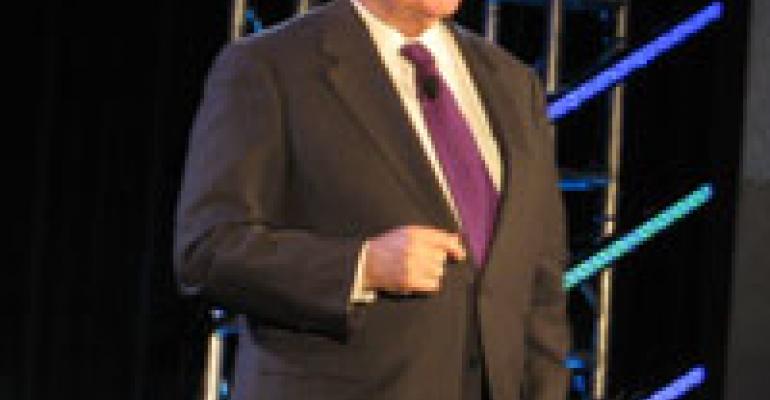 Managing the big ideas and keeping an eye on the big goals are the keys to success, former U.S. House Speaker Newt Gingrich told attendees Tuesday at the Multi-Unit Foodservice Operators conference in Orlando, Fla.

Gingrich, in a keynote speech, addressed the need to embrace a “fundamental change” and cited the administration of President Ronald Reagan as representing “a fundamental break with the world that had existed.”

“Reagan’s model was that lions cannot afford to hunt chipmunks, because even if they capture them, they will starve to death,” Gingrich said. “So lions have to figure out antelope and zebra are the only way to survive.”

He also said conservative and liberal approaches to government are based on far different assumptions that are “very different models of how the world works.”

“The conservative world view says, ‘Have the fewest possible rules and largely make them self-enforcing out of self interest,’” Gingrich said. “A liberal world-view says, ‘Since people are basically inadequate; we have to hire a huge bureaucracy to punish people into doing what they’ll never do for themselves because they don’t understand what their best interest is so we will tell them.’”

When asked by the audience for examples of what the government could do to improve the restaurant business environment, Gingrich said much would be helped with tax cuts. He suggested Congress pass a provision for no tax increases in the next two years.

“By simply stopping the tax increases coming down the road, they dramatically would improve the economic freedom,” Gingrich said.

He also proposed a 50-percent reduction in the Medicare and Social Security taxes for a year, for both the employee and the employer match, as well as reducing corporate tax rate to 12.5 percent and the capital gains tax to zero.

Gingrich recommended providing a 100-percent write-off in one year for new equipment. “If we want American workers to be competitive in the world market, we continually must have the most modern, most productive equipment,” he said.

Gingrich condemned the health-care legislation passed earlier this year, citing, for example, that a 1099 form would be required on every transaction of more then $600. “It’s not going to be workable,” he said flatly.

Also during MUFSO, participants in the “CEO Panel” expressed their support of a national menu-labeling law, but exhorted attendees to continue to call for interpretation of health-care reform that would benefit the foodservice industry.
Sally Smith, chief executive of Buffalo Wild Wings, said areas of the legislation still required clarification, adding it was important to let politicians know how it would affect their businesses.

Commenting on the requirements in the legislation mandating that menus include calorie information, Smith said she was glad that one law would be in place rather than having to navigate a patchwork of laws in different jurisdictions.
John Y. Brown, former chief executive of Kentucky Fried Chicken, said of caloric information: “It’s the truth. It’s probably the right thing to do.”

“We have to own it,” said Doug Brooks, chief executive of Brinker International, “and realize that most people lie through their teeth about what they eat.” He said, however, that attempts to offer lower-calorie items didn’t work, and that customers at Chili’s and Maggiano’s say they eat more healthfully at home, but when they eat out, they want to celebrate.

“I personally don’t think people will change their ways,” said Sardar Biglari, chief executive of Biglari Holdings, which owns Steak n Shake. “They might change for a few weeks, but they’re going to eat what they like, and why shouldn’t they? I mean, if you’re going to try to trim a few calories to live a little longer, that’s a miserable way to live your life.”

Bret Thorn contributed to this report.