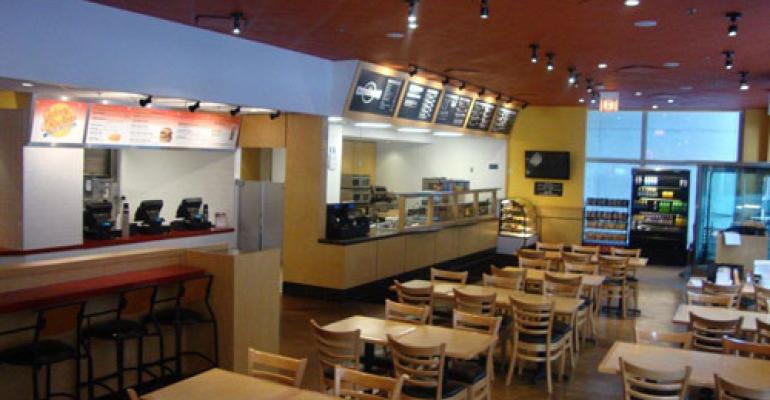 Hoping to build business later in the day, the operator of the 25-unit Halsted Street Deli chain in Chicago is experimenting with a dual-branded location with an express version of the Johnny Rockets burger brand.

Bill Gomez, owner of the fast-casual Halsted Street Deli, which is known for its big sandwiches, soups and chili, opened the first dual-branded location last month in downtown Chicago, with a second scheduled to open next week, and a possible third down the road, said Joe Conrad, Halsted’s director of operations.

The first dual-branded unit shares a total of 4,200 square feet of space, with two separate service lines and shared seating for about 30. The Johnny Rockets side takes up about 1,500 square feet, serving a limited menu with guests ordering at the counter. In addition to the traditional burgers and shakes, the Johnny Rockets menu includes Chicago-style hot dogs and an Italian beef sandwich.

Conrad said the goal of dual branding is to beef up later dayparts at the downtown locations and to reduce veto votes at lunch.

“If I want a turkey sandwich and you want a burger, everyone’s happy,” he said.

This is Johnny Rockets' first experience with dual branding, but Fuller said he is open to working with more dual-brand partners.

Johnny Rockets, which operates or franchises about 280 locations, has been tinkering with variants of the concept that work in both smaller and bigger spaces to give franchisees more options with real estate.

Earlier this year, for example, a second Johnny Rockets Sports Lounge opened in New York, a version of the brand that was first tested in a Six Flags amusement park. The Sports Lounge variant features a full bar that fits into locations bigger than the typical 1,600 to 2,000 square feet occupied by a regular Johnny Rockets. A third Sports Lounge is scheduled to open in Los Angeles at Universal City Walk later this month.

The company had also announced plans to offer an express version of Johnny Rockets to be called “Fast,” but Fuller said they have decided not to call it something different.

“It’s still a Johnny Rockets, even with a limited menu,” he said.