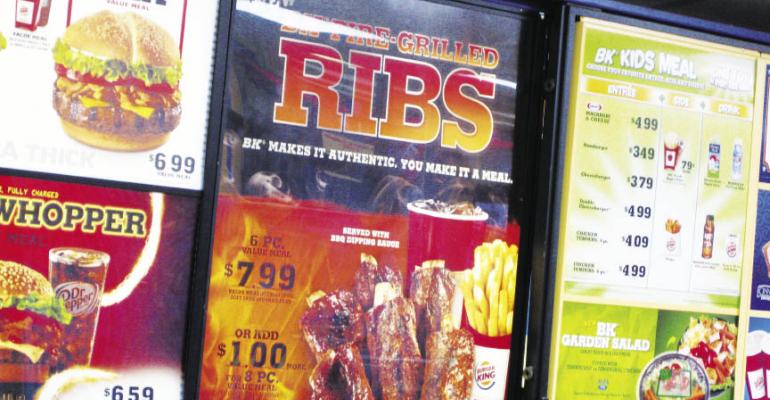 Before the recession clouded the sunny days of easy credit, consumers sought first what they craved and considered price second. Now they examine every restaurant occasion through separate lenses of desire and affordability, while expecting those pictures to merge into a single image of value.

Finding value has been easy for diners, but serving it up has been tough on operators. Everyone expected quick-service operations to lower prices during the recession, but did anyone forecast half-price dinner deals at fine-dining spots?

The good news is industry analysts believe restaurateurs have adjusted well to meet changing consumer desires. The bad news is some see downward pressure on prices remaining for the foreseeable future. That will force operators to be increasingly clever at configuring menus that are affordable for guests and profitable for their restaurants. Following are five menu-pricing strategies that are luring consumers to spend.

Make me an offer

Thanks to McDonald’s, few quick-service chains lack a dollar menu these days, and as the chain’s same-store sales prove, such margin crushers still generate other purchases. That strategy likely will remain a fixture in fast food, said Tom Kelly, chief executive of Revenue Management Systems in Tampa, Fla. But he doesn’t think operators in other segments will continue pushing big bargains once the recession evaporates.

“They know the depth of the deal is what usually drives the traffic needle,” he said. “I do think in the future you’ll see less discounting outside” of quick service.

But operators are finding consumers won’t let them stop the discounting quite yet. Chili’s Grill & Bar hoped not to revive its Two Meals for $20 limited-time offer when it expired last year; however ongoing sales softness led it to dust the promotion off again recently, albeit without dessert, “which is proof that weak consumer demand is pushing price promotions, still,” said Eric Giandelone, director of foodservice research at Mintel International in Chicago.

Meanwhile, operators such as Denny’s and McDonald’s are giving product away — Grand Slam breakfasts and Premium Roast Coffees, respectively — to create buzz. Join the breakfast club at Mimi’s Café and the first meal is on the house. Those strategies, said Leslie Kerr, president of Intellaprice in Boston, create good will and drive customer awareness without the risk of altering customer perception of a brand.

“That’s less dangerous than discounting over a long period of time,” she said.

Less can be more

When it comes to profits, sometimes smaller is bigger — even when portions and prices are smaller. It just depends on how you position it, said Gary Stibel, chief executive of The New England Consulting Group in Westport, Conn. Ruth’s Chris Steak House has bundled salad, entrée and dessert deals for $39.95, about the price of some of its steaks, “by taking some quantity out and focusing on select menu items that are very profitable at small portion sizes,” he said. “The smart money isn’t just cutting portions across the board, they’re doing it very selectively.”

“What’s nice is customers typically buy multiples and commonly spend more money than they might have if they had a regular meal,” Stibel said.

A word of caution from Giandelone: Think before you shrink.

“If you just cut portions and people notice, people feel like they’re being cheated,” he said. “That’s probably riskier than raising prices altogether.”

In the past, Kerr said, gut feelings on price too often ruled over examining hard data.

“But with POS systems, companies are better able to leverage many different types of information, so they’re making decisions based on facts rather than saying, ‘I think the $5 price point is going to resonate,’” she said.

Kelly agreed, noting that companies are drilling further into their data to make market-specific price changes rather than systemwide alterations.

“Some stores need discounting, but some don’t need it at all, and your company should be able to identify which [it is],” he said. “Every company has to manage prices as granularly as they can. And if you’re running multiple units, you have to make decisions as close to the unit as possible.”

A menu of lower-price meals offset by higher-price options is commonly called a barbell strategy. And as Giandelone pointed out, Burger King’s application caught the attention of many.

“The $9 ribs are the one that generated the most buzz,” he said. “They sold exceptionally well at a price point that few thought would work on a QSR menu. And they have that on the same menu as a $1 cheeseburger.”

Hoping to lure more casual nibblers, Morton’s The Steakhouse rolled out a seven-item bar menu with prices ranging from $5 to $6. “At a steakhouse, that’s a value menu, but it’s not so limited from a price point” that it’s not profitable, Kerr said.

The trick, she added, is for operators to learn how to promote each side of the barbell effectively.

“You’ve got price-conscious consumers on one end and price-insensitive customers on the other,” Kerr said. “So you’re challenged to communicate effectively about that promotion in a way that attracts customers for high-margin items.”

Entice me to spend

Where Kelly believes “sometimes the best strategy is to hold prices,” Stibel sees that strategy as just one of many operators need to try. “The smart operator is doing all five of these things and more; he’s testing many different things to see what works,” he said.

Kerr understands staying the course on prices, but Giandelone said no new product news is often viewed by some consumers as bad news. At the very least, he advises operators to study others who are constantly promoting their businesses uniquely. “Holding steady and not doing anything doesn’t give customers something to talk about,” he said. “There are a lot of choices out there, so you need to give people a reason to come to your restaurant.”