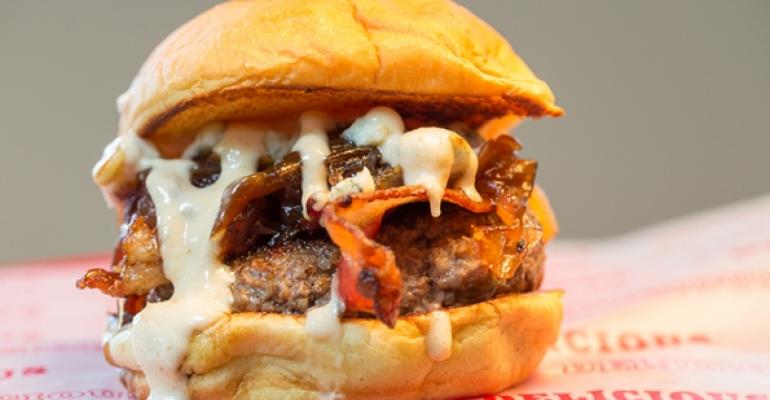 The Washington, D.C-based chain currently has five locations — three in the D.C. area, one in Chicago and one that just opened in Riyadh, Saudi Arabia. It’s headed by the Mendelsohn family, including former Top Chef contestant Spike Mendelsohn, who also operate the two-unit We, The Pizza chain and single-unit French bistro Béarnaise. Although both We, The Pizza and Good Stuff Eatery are looking for franchisees, Spike Mendelsohn said Good Stuff Eatery’s expansion is the priority.

“He was brought on specifically to boost the franchising aspect of Good Stuff Eatery. That’s his number one job with the company,” Mendelsohn said of Wilsthire.

“We’ve got all the back-of-the-house stuff done — all the manuals and legal stuff,” Wiltshire said, and now are looking to expand in the D.C. area as well as the Carolinas, the Northeast, Florida, Texas and Georgia. A new location is currently under construction in London, as well as at Ronald Reagan Washington National Airport at a former McDonald’s location.

“If we can get into various airports, that gives you such an exposure to a wide group of people, which will increase the demand all over the U.S., and internationally,” Wiltshire said, adding that he’s open to the idea of opening in markets outside his target areas if he finds interested and qualified franchisees.

Good Stuff Eatery focuses on its signature hamburgers, including the Prez Obama Burger — with applewood smoked bacon, onion marmalade, Roquefort cheese and horseradish mayonnaise — and Colletti’s Smokehouse with applewood smoked bacon, sharp Vermont Cheddar cheese, Vidalia onion rings and chipotle barbecue sauce. Burgers range in price from $6.50 to $8.50. The chain also specializes in what Mendelsohn said is a Montréal style aged French fry, made by using six-month-old potatoes that have converted more of their starch into sugar.

“You get this nutty, semi-sweet French fry,” He said. “It’s a trick I got growing up in Montréal.”

“Our toasted marshmallow milkshake tastes like a campfire and is our best seller by far,” Mendelsohn said.

“We’re also getting ready to launch Goodness bowls,” he added. Those are burgers, vegetables and sauce served in a bowl without bread.

The average per-person check is $14.15, and the restaurants range in size between 2,000 square feet and 3,000 square feet. The build out cost is around $1 million.
Wiltshire said he is seeking out multi-unit operators that currently are running one or more restaurant concepts.

“That means that they have the infrastructure, the experience and the capital resource to move forward and grow either Good Stuff or We, the Pizza,” he said.
Mendelsohn said they’re also looking for franchisees with good records of community involvement.

“You see many other great companies doing similar stuff, like Sweetgreen and Chipotle. That really inspires me, what those companies do,” Mendelsohn said.
Good Stuff Eatery’s web site lists DC Central Kitchen, the Michael Mosier Tribute Fund, CARE and Children’s Inn at the National Institute of Health as its causes. Mendelsohn also is chairman of DC’s Food Policy Council, tasked with improving food access throughout the city and promoting urban agriculture and other food-related entrepreneurship.

Wiltshire said he expects to open 10 new franchised locations in 2016, including the ones in London and at Reagan airport.