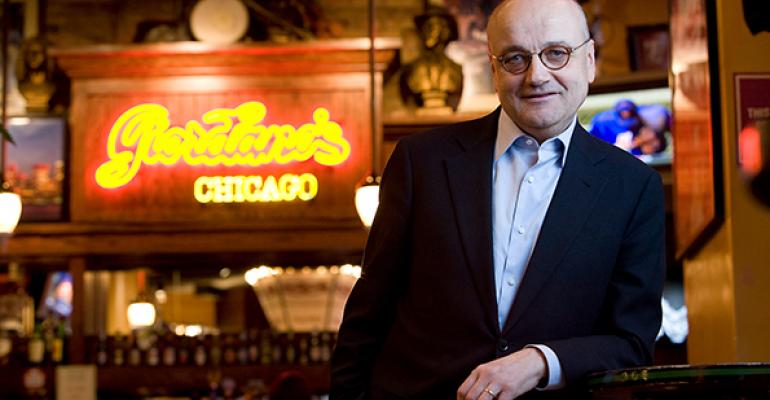 Yorgo Koutsogiorgas agreed to become CEO of Giordano’s in late 2011 because he knew the Chicago-style pizza brand had a lot of potential — even though it was emerging from a highly publicized bankruptcy.

Collapsed real estate investments by the chain’s former owners, and not the restaurant itself, contributed to the financial problems. Giordano’s was collateral damage, he said.

“It needed the care and affection that I could provide,” Koutsogiorgas said.

Giordano’s has added 10 company-owned units during that time, and is now poised to grow more, backed with $51 million in financing from GE Capital, Franchise Finance. It plans to open three or four units this year, including a location on Chicago’s Navy Pier and another in a new market, Minneapolis.

“You have to really pay attention to all aspects of a business — it’s not all about EBITDA and the bottom line,” Koutsogiorgas said, referring to earnings before interest, taxes, depreciation and amortization. “Give customers a great experience and everything else finds its way to the EBITDA line. I know that sounds a little cliché, but I believe it and I practice it. This is proof positive of that simple paradigm.”

Giordano’s, which specializes in deep-dish, Chicago-style pizza, was founded in 1974. John Apostolou and his wife Eva bought the chain in 1988 with plans to expand it. The company did expand, into Florida, and by 2011 had 55 locations.

But the Apostolous also made big bets on real estate that went bust during the recession, forcing the chain into bankruptcy. A group led by Chicago private-equity firm Victory Park Capital bought the company in a bankruptcy auction for $61.6 million.

Victory Park then lured Koutsogiorgas to be CEO. Koutsogiorgas was a restaurant industry veteran, who helped develop the Maggiano’s Little Italy concept as an executive with Lettuce Entertain You Enterprises Inc. He then went to work for Brinker International as part of the 1995 sale of Maggiano’s to the Dallas-based casual-dining operator.

Koutsogiorgas still owned a home in Chicago and was familiar with Giordano’s and its history, and believed it could be fixed. But he also saw in Victory Park a group of investors willing to give him the latitude to fix the concept, as well as the financial backing.

“I really like that group immensely,” Koutsogiorgas said. “They have a very crisp understanding of their role. Their role is in backing the operations with financial strength and security. But they stay away from day-to-day operations. I present them with a business plan, they allow me to execute it.”

While Giordano’s restaurant operations didn’t put the company into bankruptcy, that didn’t mean it wasn’t struggling when Victory Park took it over. Companies facing bankruptcy focus on survival, not building a brand. And even once the chain filed, an accounting firm ran operations, with the task of keeping the chain afloat.

“It was just trying to survive,” Koutsogiorgas said. “It was a company in disarray.”

Koutsogiorgas set about repairing the chain by building a team of executives, and then an infrastructure to support restaurant operations. The company also worked on refreshing the restaurants and introducing a new menu.

The new menu is “very pizza centric,” Koutsogiorgas said, with only a few non-pizza items, such as sandwiches, salads and Italian entrées that mostly complement the pizza.

In addition to the Chicago-style pizza, it also introduced a pizza with a thinner crust, and then one with an “extra thin” crust.

“We’re proud to be pizza centric,” Koutsogiorgas said. “We don’t want to be all things to all people.”

“Those kind of partnerships enhance our presence in the main markets where we operate most of our restaurants,” Koutsogiorgas said. “It adds credibility. Your associations tell the consumer who you are.”

But the chain has also been active in building new units. At the time that Victory Park took over Giordano’s, the company had 40 locations, 11 of which were company owned, he said. In the three years since, Giordano’s opened 10 new company-owned units, all paid for with cash generated by the chain. The company now has 50 locations.

“To me, there is no better proof of believing in what you do than putting your own skin in the game,” Koutsogiorgas said.

Among the new units was the company’s first foray into Indianapolis.

He noted that customers at that location dress up in jerseys from Chicago sports teams to ensure they have “the whole Chicago experience” when they go to Giordano’s.

Koutsogiorgas said the chain’s surprising value has helped the company succeed over these years.

“A family of four, for about $45, can have a wonderful experience,” he said. “They take pictures of the pizza to show how special the pizza is to them. And they pay less than $15, max, per person. Where can you go in today’s full-service casual space and pay $15 per person?”

The chain’s performance over the past few years proves to Koutsogiorgas his thoughts of the brand when he took it over. And it was enough to convince GE Capital to provide a $51 million credit facility. The deal will refinance existing Victory Park debt at a lower interest rate, and includes an $8 million revolving credit facility.

Bill Kraus, senior managing director with GE Capital, Franchise Finance, said the lender likes to see three years of stabilizing performance, which Giordano’s has done. Also, he said, competition for loans among restaurant lenders has made this a good time for the company to borrow.

“They’ve made some really good progress,” Kraus said. “It was time to put a new capital structure in place.”

The company now plans to grow with a combination of company locations and franchisee units. Franchisees, whose own sales are growing, have started adding new units, too. They’re adding four units now, three of them being constructed by existing operators.

“The tide has lifted all ships,” Koutsogiorgas said. “The fact that [franchisees] got a new menu, they refreshed the assets themselves, helped them also realize phenomenal growth. We do have some very happy franchisees.”