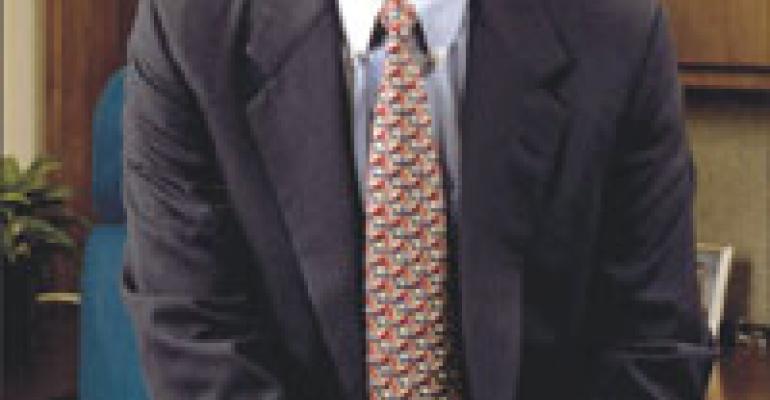 After graduating from the University of Notre Dame in 1970, Gabrys joined the Chicago-based accounting firm Arthur Andersen LLP, where he planned to spend his entire career as a public accountant. Shortly thereafter, however, he had an epiphany he wasn’t counting on.

Those relationships have played a big part in Gabrys’ success. While at Arthur Andersen, a client with whom he worked closely offered him the position of comptroller for the Washington Redskins. Although he hadn’t planned to leave Andersen, it was an opportunity Gabrys says he simply couldn’t pass up.

“[It was] a wonderful time,” Gabrys says. “I really was part of one big family.”

Nine years later, Gabrys was serving as senior vice president of the Washington Redskins and treasurer and a member of the board of directors of the Baltimore Orioles. During that time, he also became the proud owner of two Super Bowl rings and a World Series ring. Despite such achievements, Gabrys was ready for a change.

“[I had] gone as high as I was going to go in a sports organization, unless you were going to be the owner,” Gabrys says.

While Gabrys says he couldn’t see himself as the owner of a sports organization, he could imagine himself eventually becoming the chief executive of a company such as Guest Services.

“I loved [Guest Services] from the first time I got involved,” he says. “I loved the employees. I just kind of fell in love with the industry.”

When Gabrys first joined GSI, he says the company, which was founded in 1917 to provide dining services to employees of government facilities, was proud and stable—and ripe for a major shift.

“You have to keep making changes in order to continue to progress,” he says.

During Gabrys’ tenure the company moved away from traditional cafeteria-style foodservice to more service and branded concepts similar to food courts. The thrust of the business also was changed, as the company expanded into hotel and luxury-condominium management and a wholesale produce and floral company.

Guest Services oversees foodservice at the U.S. House of Representatives, the Centers for Disease Control and Prevention, and the U.S. Department of Energy, among other government facilities. GSI also manages foodservice operations at several museums, including the U.S. Holocaust Museum, the National Gallery of Art and the Corcoran Gallery of Art, all in Washington, D.C. The company also has several corporate-dining and school and university accounts.

“We [not only] have more units, but bigger units…different kinds that serve more people and produce more profits,” Gabrys says.

While he declined to offer specifics, Gabrys says the growth in hotel and luxury-condominium management and at the produce company has been dramatic, with sales now accounting for a large part of GSI’s business.

It was also under Gabrys’ watch that the company instituted a nationwide rebranding campaign. Launched in 2005, the campaign included the unveiling of a new logo featuring a contemporary green pineapple, the international symbol for hospitality, next to the company name.

“It was time,” Gabrys says. “Our whole logo, our corporate colors…we just seemed kind of dated. It really didn’t take into account all the changes we made.”

Gabrys says there’s no way to quantify the impact of the rebranding effort, however, he adds, it certainly has opened more doors for the company.

Although Guest Services has evolved since he took charge, Gabrys is reluctant to take credit. “While the change[s]…occurred during my time as president, no one person could ever take credit for this,” he says.

Selflessness is one of the many qualities that make Gabrys so successful, says Barry Reisig, who has known him since the two worked together at Arthur Andersen more than 30 years ago.

“He’s always looking out for the person,” Reisig says. “He goes out of his way…to recognize people. He knows people by name.”

Those who work with Gabrys say his exceptional people skills—including his openness and accessibility to people at all levels of the business, from dishwashers to high-profile clients—have been instrumental in the continued success of GSI.

Barry G. Trice, vice president of hospitality and operations at GSI, has worked with Gabrys for more than a decade. “He’s just very accessible,” Trice says. “You feel like he’s not only your boss, he’s your friend. I think that has helped our company to grow.”

To create an open and fair culture, Gabrys spends most of his time visiting the various sites where his 3,500 employees work, trying to get to know as many of them as possible. He not only makes regular visits, but every employee can easily get in touch with Gabrys because he almost always answers his own phone.

A big believer in “treating our employees right,” Gabrys created several recognition and reward programs. Among them is the “On the Spot Award,” which recognizes an employee or group of employees for special successes. Most recently, the award was given to the team at the National Gallery of Art Sculpture Garden in Washington, D.C., for successfully handling the large crowds that attended the site’s Friday night Jazz in the Garden program. Gabrys gave each employee a spot bonus and the unit manager several sets of Redskin tickets to distribute through a drawing.

Gabrys also instituted a cost savings award designed to encourage and recognize leadership at every level and reward individual employees or teams for new and innovative procedures or cost savings ideas that have been successfully implemented.

Reisig, who recently joined GSI’s board, says there’s no doubt that Guest Services is a better company because of Gabrys.

“[The company] is more financially stable,” Reisig says. “It has had continuous growth and employee morale is tremendous. There are very few things we see that need to be improved.”

Gabrys also manages to put others ahead of himself outside of the workplace. He is involved with a number of philanthropic organizations, although he says he particularly enjoys serving on the boards of both Life with Cancer in Northern Virginia and the American Heart Association.

“Some people get involved with charitable organizations because it looks good…because it’s an ego thing,” says Gordon Hay, director of Life with Cancer. “Not Gerry. Gerry gets involved because he genuinely cares.”

Although all of Gabrys’ jobs have required dedication, he says they also have given him the ability to devote time to his wife and two children. For example, he says, even in the weeks before the Redskins first went to the Super Bowl in 1982 and he was working 19-hour days, he never missed one of his kids’ sporting events or any major school event. In fact, during his entire career with the Redskins he even found time to coach his son’s baseball teams.

“I developed some really good relationships with the kids, and I hope I taught them how to win with humility and lose with dignity,” he says. “I also stressed the importance of teamwork, something that continues to carry over to my work life today and hopefully to theirs.”