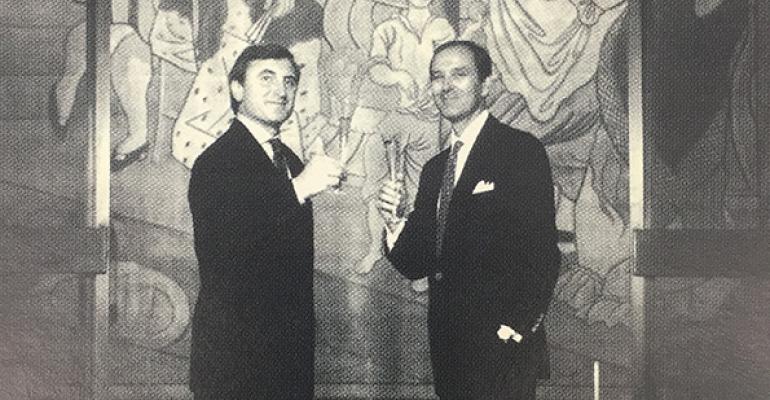 After 57 years, The Four Seasons restaurant will serve its last meal July 16.

The landmark New York City restaurant (literally: The New York Landmarks Conservancy made it so in 1989) was opened by Restaurant Associates in 1959. It was the brainchild of legendary restaurateur Joe Baum, who had already dazzled the city with restaurants such as his audacious Roman-themed Forum of the Twelve Caesars and would go on to delight them with Windows on the World on top of the World Trade Center.

For generations, the restaurant was the top see-and-be-seen restaurant in the city, credited with creating the “power lunch” and remaining a favorite spot for publishers, financiers, fashion designers, advertising executives and real estate developers.

“With its sleek, cool, modernist design, The Four Seasons broke the French stranglehold on what it meant to be fancy,” said Michael Whiteman, Nation’s Restaurant News’ founding editor and later a partner of Baum’s.

It was arguably the city’s first American restaurant, eschewing classical French food for seasonal items from around the country.

“Although its first menus had a fair amount of French language, the food was inventive and irreverent in a distinctly American manner,” Whiteman told NRN in an email. “Local? Did that. Seasonal? Did that. Spa cuisine? Did that, too. Cherry tomatoes, snow peas, baby avocados? You had them first at The Four Seasons.”

“The Four Seasons long ago abandoned the brilliant dictates of its creator Joe Baum,” long-time New York restaurant critic Gael Greene told Nation’s Restaurant News in an e-mail. “It cost $7,000 in overtime just to change from fall to winter over a Sunday. Uniforms, accessories, flowers forced to bloom to change with the season, cummerbunds, matchbooks, ashtrays, cocktail napkins, even cloakroom checks, service plates, pageboy uniforms. That whole magnificent megillah is gone, along with the pageboys. But at least the tableside duck carving drama remained at my most recent dinner less than a year ago.”

Baum saw the restaurant through to the early 1970s, at which point, it had lost some of its allure and was catering more to tourists than power brokers, according to a recent story by William Grimes in The New York Times.

It was bought in 1973 by Tom Margittai, who worked in Restaurant Associates’ fine-dining division, and Four Seasons director Paul Kovi, who breathed new life into the restaurant.

“The dapper Hungarians … signaled The Four Seasons’ renaissance, as they shook up the kitchen, created the Power Lunch, and restored the gloss,” Greene said.

Former NRN managing editor Paul Frumkin, who covered the New York restaurant scene for more than 20 years, recalled the prestige of The Four Seasons in those days.

“When I came down from The Culinary Institute [of America, in Hyde Park, N.Y., where Frumkin graduated in 1980], that was the first place I wanted to make a pilgrimage to,” he said. “To me it just symbolizes New York. I think in a lot of ways it symbolized New York high-end dining for a lot of people. I mean, we always fall back on the cliché, ‘the quintessential New York restaurant,’ but it was, and as far as influencing the rest of the country, I think it was a master class in [how to run] a modern American restaurant.”

Kovi and Margittai hired Swiss hotelier Alex Von Bidder and Tuscan operator Julian Niccolini to run the restaurant, and the team took over management completely with the restaurant’s purchase in 1995 by Seagram & Sons, with Niccolini and Von Bidder retaining a minority stake.

The Seagram Building, where The Four Seasons is located, was bought by real estate developers Aby Rosen and Michael Fuchs in 2000, and in recent years Rosen has had disputes with The Four Seasons, most notably a battle with the Landmarks Conservancy over a Picasso curtain, “Le Tricorne,” which Rosen wanted to have removed, ostensibly to have the wall behind it repaired. That caused great stress among preservationists, with the Landmarks Commission expressing concern that such a removal would cause the fragile tapestry to crumble.

Rosen finally agreed to pay to have the curtain restored and removed, and it is now on display at The New York Historical Society.

But philosophical differences between Rosen and his restaurateur tenants became clear.

Although The Four Seasons has remained an important venue for a certain set of the city’s elite, food-focused trend watchers have moved on. Von Bidder and Niccolini attempted to infuse new culinary life in the restaurant in 2009, when they hired celebrity chef Fabio Trabocchi to replace Christian “Hitch” Albin, who died from cancer after having run the kitchen for 22 years. But Trabocchi left after just three months. Von Bidder at the time said the chef had “too many philosophical differences” with management.

Last year Rosen enlisted Major Food Group to take over the space and create a new concept, which will include the stylish Grill Room and the elegant Pool Room — both protected due to their landmark status, as well as Brasserie, a separate restaurant in another part of the building.

Major Restaurant Group, run by chefs Mario Carbone and Rich Torrisi and business partner Jeff Zalaznick — all in their 30s — operate the New York City restaurants Carbone, Dirty French, Santina, ZZ’s Clam Bar, Sadelle’s and the four-unit sandwich shop Parm. They also have a Carbone in Hong Kong and plan to open one in Las Vegas this fall. The group’s restaurants are widely praised by local food press and enjoy popularity among trend-forward customers.

Von Bidder and Niccolini reportedly signed a lease to relocated three blocks south, in a 20,000 square-foot space on Park Avenue between 48th and 49th streets. They’re aiming for a late 2017 opening. But Greene said this is still the end of an era.

“Now that the closing is here, I am seized with sadness,” Greene said. “I cannot imagine there will ever be another Four Seasons. Niccolini and Von Bidder, with their partners, the Bronfman family [who own Seagram], own the name. But the name alone, even if a corps of today’s power lunchers follow, will never be a stand-in for The Four Seasons we’ve known in its rarified elegance.”

Correction: July 18, 2016 An earlier version of this article misstated that Niccolini and Von Bidder are seeking a new location for The Four Seasons. In fact, they have reportedly already signed a lease on a spot in Midtown Manhattan.