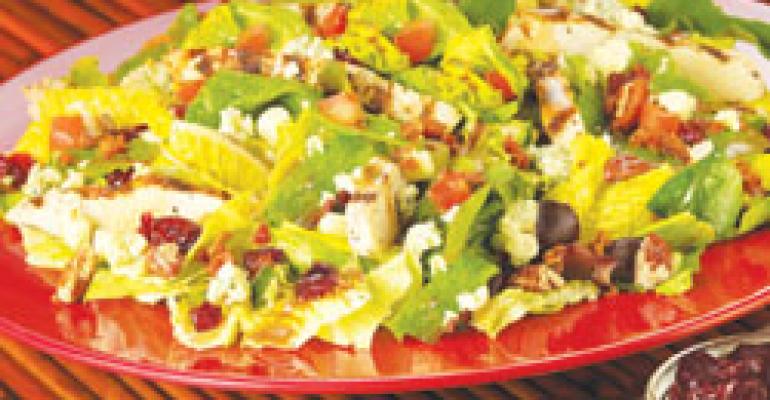 McAlister’s Deli, in rethinking its dessert offerings, found a way to save approximately 45 percent in food costs, reduce waste and boost sales.

The Ridgeland, Miss.-based fast-causal chain used to offer from six to eight cakes and pies as well as a handful of grab-and-go options at the point of purchase. Now the 300-unit chain serves one “indulgent” featured dessert and a few select sweets, such as cookies and brownies, which are merchandised near the cash register.

“The food costs were so difficult” with the fuller selection of desserts, because their shelf life is generally short, says corporate executive chef David Groll. In addition to cutting costs, promoting one dessert on the menu board actually increased overall dessert sales by about 1 percent to 2 percent.

While the effort to slim the menu offerings was prompted by the recession, the strategy will not change once the economy improves. In fine-tuning food programs during the troubled times, operators say they are positioned better to profit as business rebounds.

At Boston-based Au Bon Pain, comfort foods like barbecue are what consumers have been craving for the last six months, says the company’s corporate chef, Thomas John. For that reason, recognizable, inexpensive dishes will continue to be the focus of new menu introductions for the next six months at the 130-unit bakery-cafe chain.

By next summer, however, John plans to offer a transition menu of street food, which he says is semi-adventurous. Future offerings will be inspired by dishes typically sold by roadside vendors and could range from Southern India’s dosa to kebab from Istanbul to New York City hot dogs.

“Street foods are simple and comforting, and lower-priced than regular food,” John says. “They kind of go well with our concept as a marketplace. I can’t give you examples. It is too early, and it might change.”

John could report, however, that the new line will feature street fare that comes from “different parts of the world.” He says that each introduction is scheduled to run for two to three months. ABP’s post-recession rollouts will be “comfort food with a twist,” John adds.

Danny Meyer, founder of Union Square Hospitality Group in New York, which operates both fine-dining and quick-service outlets, is thinking along the same lines.

After the recession, “we’ll continue to see chefs seek to update and improve comfort foods like burgers, hot dogs, fried chicken and tacos,” he says. “And America’s favorite go-to food—Italian—will remain more popular than ever.”

“Portion size and prices will recede along with the recession,” Meyer adds. After all, it will take time for consumers to start spending again.

“The whole focus is to provide value” at ABP now and into the foreseeable future, John says, noting that he is working about a year in advance on dishes in the pipeline.

McAlister’s has sped up the length of time it takes to move dishes from concept to introduction, especially when it comes to how quickly ingredients are available systemwide.

The shorter time frame helps because often the deli chain changes just one element of an item, such as adding chipotle to a mayonnaise or shallot to a dressing, Groll says. The revamped dressing was part of a recent seasonal salad featuring Gorgonzola cheese, dry cranberries and honey-roasted almonds, he notes.

“It used to be we needed six to eight weeks to get products,” Groll says. “Now we’ve shortened that cycle to two to three weeks. Our vendors support us to be more agile and flexible. And we work with vendors with perimeters, so we aren’t left with a huge inventory” once a promotion is finished.— [email protected]