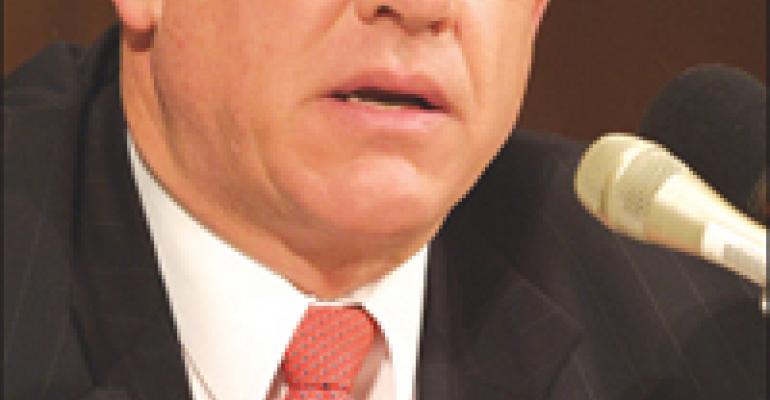 While not specifically addressing his own boardroom battle with Applebee’s International Inc., Breeden said during a speech at an annual Tulane Corporate Law Institute event in New Orleans that many corporate boards are filled with “sleeping luminaries” who do not actively guard shareholder interests and therefore leave companies open for takeover attempts.

“The most severe indictment of corporate governance practices is the growth and success of private-equity companies,” Breeden was quoted as saying in a Reuters report. “There are too many cases with private-equity deals where what’s missing is an effective board.”

The influx of private-equity dollars into the merger-and-acquisition arena has been widespread for the past two years across all business sectors. In the restaurant industry, private-equity companies have fueled some of the largest going-private buyouts in its history, including billion-dollar-plus deals for Dunkin’ Brands and contract foodservice giant Aramark Corp. and the still-pending deal for Outback Steakhouse parent OSI Restaurant Partners Inc.

Media accounts of the Tulane event said Breeden argued that companies, especially public ones, should be more aggressive in executing strategic changes internally and should work to solve their problems rather than “sell out” to private-equity buyers.

Separately, there has been growing concern within certain business circles that private-equity-led buyouts only benefit the largest of shareholders, typically company management, and the private-equity firms themselves. Because private-equity players typically purchase a company on the cheap and sell it back into the public market years later for large gains, shareholders don’t benefit from the depressed buyout prices, some observers contend.

Last fall, the U.S. Department of Justice asked some private-equity firms for information about how they bid for companies in leveraged buyouts. If regulators find evidence of illegal, anticompetitive practices like collusion or auction rigging, the Justice Department could file charges or seek changes in the way private-equity firms arrange transactions.

Still, Breeden’s sentiment is in stark contrast to that held by many analysts and industry watchers who have applauded, for example, OSI’s move to go private. Observers agreed that OSI would be able to more easily turn around its stagnant operations as a private entity rather than one answering to demands from Wall Street. Like many casual-dining companies, OSI and its concepts have suffered a sales slowdown for the past three years.

When OSI first announced its $3.63 billion buyout, securities analyst John S. Glass at CIBC World Markets in Boston said turnaround efforts would include reinvestments in the restaurant base, an overhaul of the Outback menu and a reworked price-value relationship.

“These actions can be painful for shareholders as they are costly and often dilutive to earnings near-term,” he said. “They are more easily done in a private transaction.”

Many predict that Applebee’s, the casual-dining giant in which Breeden holds a 5-percent stake, may go the way of OSI in a large, private-equity-sponsored buyout. Perhaps to stifle that opportunity, Breeden has been engaged in a months-long war of words with Applebee’s and in late March filed proxy materials to nominate four directors to Applebee’s board of directors.

“Applebee’s period of deteriorating operating performance has now entered its fourth year, and as major shareholders we believe it is time for change in the company’s direction and in its governance,” Breeden said in a statement. “We believe that change must start in the Applebee’s boardroom.”

Dave Goebel, chief executive of Overland Park, Kan.-based Applebee’s, responded to Breeden’s latest comments by reiterating the company’s prior offer of two board seats for two of Breeden’s nominees as well as the offer of a confidentiality agreement so that Breeden could observe the work of Applebee’s strategy committee, which is exploring alternatives for the company, including a possible sale or large recapitalization.

“It is difficult for us to understand why Mr. Breeden, who says he wanted to be a constructive force, would reject these offers in favor of an expensive, time-consuming and distracting proxy fight,” Goebel said in a statement.

Applebee’s annual meeting is slated for May, although a date had yet to be set by presstime.