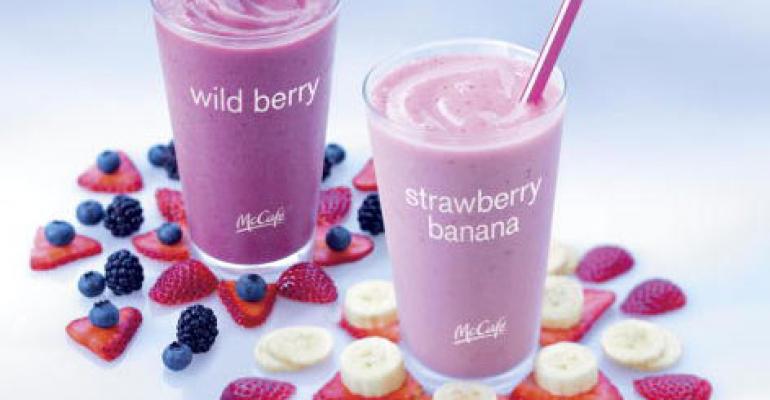 McDonald’s Corp. said beverages at both ends of its price spectrum led the way to a 5.7-percent increase in U.S. same-store sales in July.

McDonald’s said the continued strength of its core menu items and value offerings like the Dollar Menu contributed to the sales increase, but it singled out drinks in particular for the brand’s success in the United States in July.

The chain expanded its McCafe line with Frappes earlier this year and rolled out Real Fruit Smoothies systemwide in July. Initial demand for the smoothies was so strong that McDonald’s did away with plans for a national sampling event over supply concerns. In addition, several markets have promoted a $1 any-size offer for soft drinks and sweet tea.

“Our customers are at the heart of everything we do, and our strong July sales performance reflects our commitment to them,” said Jim Skinner, McDonald’s chief executive. “We’re listening to our customers and offering the right combination of high-quality food and beverage choices, convenient locations with extended hours, and outstanding value across the entire menu.”

McDonald’s pointed to France, the United Kingdom and Germany as particularly strong markets that drove sales growth in its European business in July. The company has continued to reimage restaurants across the division, similar to the remodeling push in the United States as a way to grow sales over the long term.

In the APMEA region, new menu items and a strong breakfast performance contributed to the same-store sales increase, with Australia, Japan and China leading the way, the company said.