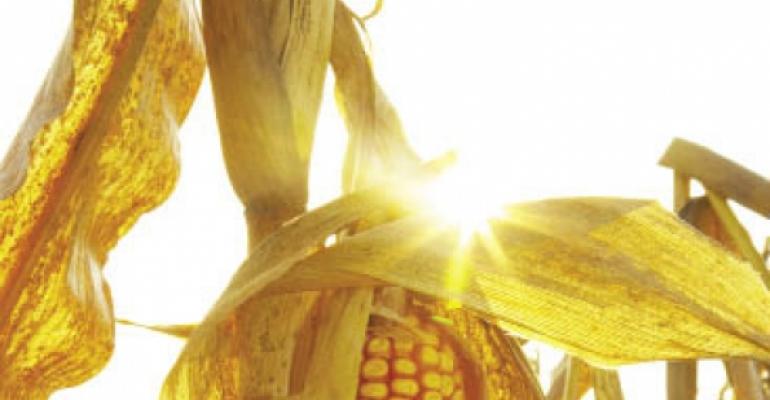 In its October World Supply & Demand Estimate, the Department of Agriculture slashed its 2010-2011 production forecasts for corn, wheat and soybeans, likely rekindling another wave of commodity inflation.

On Oct. 8, corn futures hit two-year highs of $5.28 per bushel, up 62 percent from a low of $3.25 June 29, and are likely headed higher. USDA also raised its already record high 2010-2011 corn forecast from $4.40 to $5 per bushel. Corn, a major feedstock and input cost, is now at a dangerously high price level for beef, pork, poultry and dairy producers, and could drive protein prices higher in 2011.

Some of the commodity insanity that transpired this past summer started with wheat. Wheat futures surged by 83 percent between June 6 at $4.28 per bushel and Aug. 5 at $7.85 per bushel after Russia lost a third of its wheat crop to drought and announced a ban on all grain exports. Prices have since settled back a bit, but remain over $7 per bushel. In its October report, USDA reduced 2010-2011 ending supplies by 5.4 percent due to lower production and higher expected feed usage and export sales. USDA raised projected 2010-2011 farm-level, cash wheat prices from $5.30 to $5.50 per bushel.

Overall beef supplies look to be tighter and prices higher in 2011. The USDA projects beef imports for 2010 at 2.48 billion pounds, 5.4-percent below last year. Imports from Australia and New Zealand are down 28.9 percent and 6.1 percent, respectively. A weaker U.S. dollar has made Australian imports expensive, and that situation is ongoing. As a result, there is a shortage of imported grinding beef and trimmings, particularly lean 90s. Any cutbacks to U.S. domestic cow slaughter could impact ground beef supplies and prices. Live cattle futures have been hovering around $95 per hundredweight, or cwt, up from $82 a year ago, and would cost more than $100 to book for 2011. The USDA is forecasting choice steer prices, which averaged $83.25/cwt in 2009, to be up 12.9 percent at $94 in 2010, and then to gain another 4.8 percent to average $98.50 in 2011.

For the second consecutive month, the USDA increased its milk, butter and cheese price forecasts for both 2010 and 2011. The USDA raised projected milk output slightly for 2010 as higher milk-per-cow more than offset lower cow numbers. However, the 2011 forecast output was reduced as higher feed prices are expected to slow the rate of growth in cow numbers and milk-per-cow. Both Class III and Class IV milk price forecasts for 2010 and 2011 were raised due to the higher product prices. The all-milk price — $12.84 in 2009 — is forecast to average $16.50 in 2010 and $16.45 in 2011.

The USDA quarterly hog report showed a 3-percent drop in hog inventory and confirmed tighter pork supplies. Year-to-date pork output is down 3.5 percent and exports are up 6 percent, leaving net pork supplies 5 percent below year-ago levels. In addition, pork in cold storage is running 27 percent below a year ago and is at a six-year low. Some of the herd/production decline can be attributed to the extreme summer heat. However, most of the data in this USDA report was compiled before the corn market skyrocketed. That coming surge in feed input cost certainly will have hog producers second-guessing their current farrowing intentions. Breeding inventory at 5.77 million head is already 1.8 percent lower than last year. Lean hog futures at $74/cwt are down from highs of $87 in August, but still 46 percent above 2009 levels.

The pre-Thanksgiving ham market in the low-90-cents-per-pound area is roughly 40 cents, or 80 percent, above a year ago. Pork bellies have dropped into the 80-cents-per-pound area and are down from September’s record-high $1.50. Bellies stocks Aug. 31 were at a 15-year low of 6.89 million pounds, down 86 percent from a year ago. Tight supplies should limit further price declines.

The big question for broiler producers is the outlook for profitability in light of $5 corn prices. But it’s likely that large producers have at least hedged a good portion of their feed supplies for the fall. Egg sets in September averaged 4 percent above a year ago, indicating production growth into the end of the year. October’s USDA report showed that broiler output in 2010 is expected to be 36.43 billion pounds, up 2.6 percent from a year ago. However, higher feed prices limit production in 2011 to 37.08 billion pounds, just 1.8 percent above 2010, down from previous forecasts for 2.6-percent growth.

USDA boneless, skinless breast prices in the mid-$1.30s are down from a pre-Labor Day, six-year high of $1.81 per pound. Look for prices to remain near current levels through year’s end. The USDA whole wing market also is in the $1.30s, but headed toward $1.50 in January and higher in February. Leg quarters at 40 cents could lose ground as Russian exports have not returned to expected levels. The industry has lost valuable revenue from leg quarter exports. With breast prices seasonally lower, there can’t be much incentive to maintain current production rates.

Argentina’s ongoing trade issues with China have allowed U.S. exporters to step in and pick up a portion of that business. As a result, the USDA nudged up its export forecast for 2009-2010 to 3.4 billion pounds and raised its 2010-2011 forecast by 19 percent to 2.5 billion pounds. In October’s Supply & Demand Report, the USDA bumped forecasts higher across the soybean complex for both 2009-2010 and 2010-2011. The 2010-2011 soy oil forecast was bumped by 5 percent from 39.5 cents to 41.5 cents per pound. Fundamentals remain strong. Vegetable oil consumption is projected to increase 4.5 percent in 2010-2011, led by increases for China and India. Soy-oil futures hit an annual high of 46 cents in early October and could be headed higher.

John T. Barone is president of Market Vision Inc. in Fairfield, N.J., and can be reached for comment at [email protected].