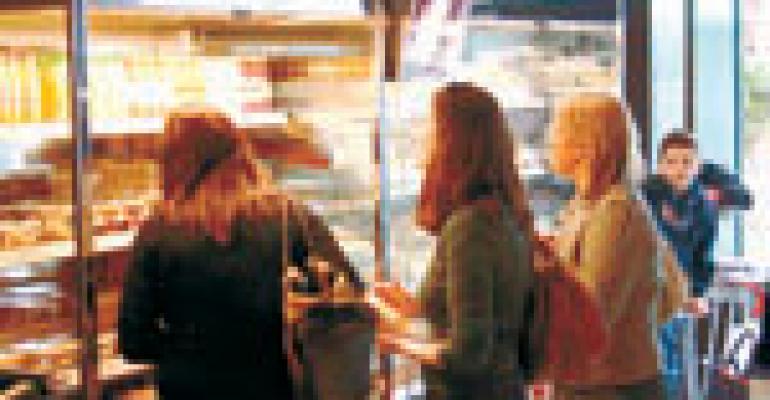 Refrigerated displays pioneered in the grocery industry are helping operators ply the lucrative niche of gourmet grab-and-go foodservice. They send patrons quickly on their way with packaged foods while providing greater space-efficiency and lower buildout costs for operators because they can be built to fit almost any site.

“You’ve seen it in every grocery,” said Stephen Zwick, an architect and designer for Hatch Design Group in Costa Mesa, Calif. “But these cases are really designed to maximize presentation.”

This type is known in industry terms as an “air screen” case, said Zwick, who formerly designed projects for OTG Management Inc., based in Philadelphia, an operator of Cibo Express and many other airport restaurants and food outlets. “It drops air across the front of the display case to keep the food inside cold.”

A fan maintains a “convective loop” of cold air through the display. The open-front design does not impede self-service or block the view of products inside.

In some units, the compressor is located on the top of the case rather than at the bottom, allowing another merchandising compartment below. Some have panels that cover the front of the display after hours for greater energy efficiency.

Grab-and-go merchandising is integral to the mission of Pret a Manger, the New York City-based arm of a London-based company with 14 Manhattan food shops and 189 all told, the majority in the United Kingdom. The goal is to serve customers its packaged sandwiches and salads within 90 seconds. All items are made fresh.

Most Pret stores have four refrigerated displays, two on each side of a hot-food case. Pret offers items like the All Natural Slow Roast Beef, Arugula and Parmegiano sandwich and an All Natural Cobb & Greens salad. The demand is strong enough that Pret’s shop at 39th Street and 7th Avenue in Manhattan has sales of $3,683 per square foot per hour, making it the busiest Pret in the world, according to the company.

Airports are another fertile field for upscale grab-and-go. OTG Management’s Cibo Express Gourmet Market is one of the concepts that have taken up the slack of cutbacks in airline foodservice recently.

Custom-built open-front refrigerated cases make it fast and convenient for Cibo Express customers to grab a mozzarella and prosciutto on ficelle bread, its most popular sandwich.

“Space is always at a premium in the airports,” said Todd Cavallaro, director of markets for OTG, which has 79 outlets and works with a manufacturer that builds cases to fit its sites. Some airport locations have just two cases, while others have room for as many as 13.

However, custom cases are relatively economical because they are built off-site and then installed in the space, he noted.