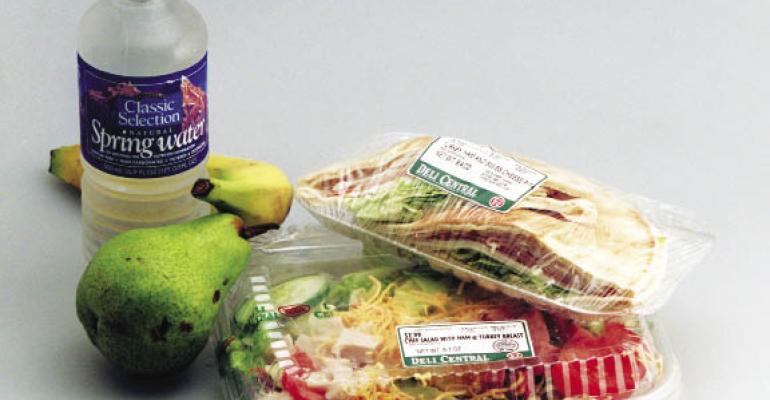 All indications reveal that the popularity of retail foodservice is not a flash in the pan.

How has this happened? Why would a consumer choose to eat food-away-from-home from a convenience store rather than a restaurant?

For one thing, it’s convenient. Consumers are often at retail food stores buying other items. In addition, these retail venues have responded well to the demand for foodservice with expanded offerings and revamped in-store prep and display areas. C-store offerings also have shifted from high-fat, high-sodium items to the more healthful foods sought by consumers. The Technomic study revealed that two in five consumers consider nutrition when buying prepared foods compared with only one in four who do the same at a restaurant.

In the past, c-stores would have been considered the least likely operations to take business from quick-service operators. But the economy has forced many consumers to watch their pennies.

Tom Henning has seen a big change in buying patterns. Henning is chairman of Cash-Wa Distributing of Kearney, Neb. Cash-Wa is a broadline distributor with a large segment of the business consisting of c-store customers. Three distribution centers deliver to customers in nine Great Plains states.

What is your take on the recent growth of retail foodservice? Have you seen a big change in your c-store business?

Yes, we’ve seen significant growth in our c-store purchases. Tobacco and fuel have traditionally been the biggest sales for them. Now tobacco sales are down and [higher] fuel prices have driven down sales of gasoline. C-store owners need something to replace those profits, so they’ve turned to foodservice. In some cases, foodservice sales are 30 percent of gross profits. We’re seeing the needle really move.

How is foodservice defined in the c-store business?

It used to be just sandwiches, juices, cheeses and pastries in the morning. Now it’s defined by prepared foods. The foodservice offerings are moving in that direction. There are also two kinds of franchises that may operate in stores. These usually offer pizza or fried chicken. With one kind, the store uses the brand name but the store staff prepares all the items. With the other, a franchise like Subway establishes and supports a separate area within the store.

Will this trend continue?

Absolutely. The concept of foodservice in retail is still growing. It’s especially growing in c-stores in sparsely populated, more rural areas. There aren’t as many restaurants available to people, so they are regular customers of c-stores.

What are the drivers of this trend?

C-stores are able to provide items at a lower price point. Their margin expectations are less than those for a QSR. Also, people can shop for other things in health and beauty or other non-food departments.

How can QSRs fight back?

Good question. It will be harder in the small towns where c-stores have built up relationships with their customers. C-stores have changed, even in terms of employees. Two c-store companies have been on Fortune magazine’s list of the “100 Best Companies to Work For” for several years.

I guess the biggest factor could be that QSRs don’t have the limitations on the type of items they offer. They can have a larger variety and have more flexibility to change the menu. They can target what the consumer wants more easily. A c-store only has about 200 square feet of prep area, so their offerings are limited by degree of preparation. They also have less storage space.

What do you see for the future of c-store foodservice?

I think five years from now c-stores will be restaurants that sell gasoline.