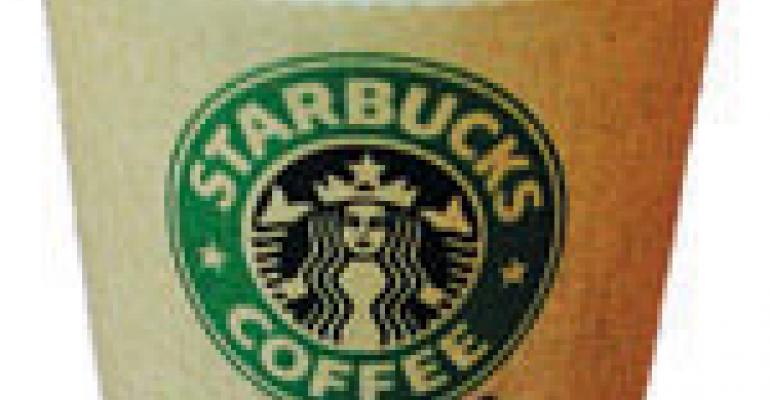 As Starbucks and McDonald’s battle with multimillion-dollar ad campaigns for the hearts of specialty coffee drinkers, longtime players Dunkin’ Donuts and Krispy Kreme are working to freeze sales at the competition with discounts, and chains such as Cold Stone Creamery and Emerald City Smoothies are hoping to perk up sales with new java drinks.

“We stayed away from the coffee thing for years, trying to stay on brand,” says Al Schriber, a partner in Emerald City Smoothies, which in February added a line of hot, nutrient-enhanced coffees called “JavaFit.” The coffees are available in four varieties, including Diet, Energy Plus, Immune and Multi-Vitamin.

In testing the new coffees it became clear that customers were interested in a hot coffee that fit with the brand’s emphasis on healthful living, Schriber says.

The Mercer Island, Wash.-based franchisor is now rolling out the JavaFit line throughout the 62-unit chain. Whether a broader line of specialty coffees is in the chain’s future remains to be seen.

Schriber says he can envision the addition of cold coffee drinks down the road, but some iced, blended specialty beverages are “nutritionally hazardous.”

He adds, “Here in Washington, we’re in Starbucks’ back yard, so we’re watching what they’re doing.”

One thing the Seattle-based coffeehouse giant has been doing is duking it out with McDonald’s. In May, both McDonald’s and Starbucks launched multimillion-dollar advertising campaigns touting the superiority of their coffees.

For Oak Brook, Ill.-based McDonald’s the value-focused campaign marked the rollout of the burger-category leader’s new espresso-based drink line at 11,000 of the chain’s 14,000 domestic units. McDonald’s has estimated that the coffee line could translate to an additional $1 billion in annual sales.

At 16,000-unit Starbucks, which has struggled with flagging sales as the recession compelled consumers to cut back on spending, the ad message was designed to highlight the brand’s emphasis on quality of experience.

For both the stakes are high as consumers clamor for a good cup of Joe.

Since 2002, the number of coffee transactions in foodservice outlets overall has increased 24 percent, according to market research firm NPD Group, based in Port Washington, N.Y., and the quick-service segment has been driving that trend—including coffeehouse brands and hamburger and doughnut vendors.

More recent NPD surveys indicate, however, that the hamburger and doughnut players may be stealing market share from gourmet coffeehouse chains, says Bonnie Riggs, a restaurant industry analyst for NPD.

The number of specialty coffee transactions, including espresso-based lattes and iced-blended versions, has increased about 13 percent each year since 2002, compared with about 3-percent growth annually for brewed coffee.

Initially the specialty coffee growth was coming from coffeehouses such as Starbucks, Riggs says. However, in recent months, consumers appear to be getting their specialty coffee increasingly from other sources, the NPD data indicate.

Looking at the period January through March in 2009 compared with the same period last year, the total number of coffee servings within the quick-service segment was estimated to total 1.4 billion. Of that, 653 million servings were reported as specialty coffee drinks, an increase of 1 percent.

Meanwhile, the number of specialty coffee transactions at coffeehouse concepts declined 10 percent for the same period to 49.2 percent of servings—still by far the most popular source for specialty coffee, but the segment’s leadership position appears to be eroding.

Some of that shift could be explained by consumers taste-testing McDonald’s new coffees as McCafé products become available, Riggs says.

At the same time, customer satisfaction surveys indicate that the perception of quality and value for specialty coffees from hamburger restaurants is improving as it becomes easier to find a caramel-spiked iced-mocha blend outside of specialty coffeehouse chains, Riggs notes.

McDonald’s isn’t the only burger slinger to up the ante with new coffee beverages.

Last year, Burger King had success with the introduction of its Mocha BK Joe, a cold coffee drink, and Wendy’s officials last month announced plans to add new coffee-flavored Frosties. The signature Frosty line will include two flavors: “Frostycino,” made with vanilla base, coffee syrup, whipped cream and topped with a chocolate drizzle; and Coffee Toffee Twisted Frosty, featuring a vanilla base blended with coffee syrup and chocolate-covered toffee bits.

The Subway sandwich chain has also been testing the sale of Seattle’s Best Coffee, a brand owned by Starbucks. And Sonic Drive-Ins offer a line of hot, cold and frozen coffee drinks made with premium-Roast coffee, though company officials declined to comment on sales trends for the drinks.

Dan Beem, president of Scottsdale, Ariz.-based Cold Stone, says the drinks were part of a plan developed last year to grow the chain’s average unit volume from $360,000 to $500,000.

“We were noticing that if a group of four came into a Cold Stone, three might get ice cream or a shake, but the fourth would go down the street for an ice-blended coffee,” Beem says.

To recapture such customers, the company developed the coffee-flavored drink line based on ingredients franchisees already on hand, such as the proprietary instant-coffee blend used to flavor the coffee ice cream, milk and the nonfrozen ice cream base, Beem says.

Although still new, the Sweet Cream Lattes now account for about 4 percent of sales, Beem says, noting that he expects that percentage to grow with the current rollout of new menu boards that include the drinks.

Beem says the drinks are also expected to increase the chain’s traffic overall. While customers may go out for ice cream two times a month, on average, he says, they tend to buy coffee drinks a lot more often. And with 1,450 locations in 11 countries, he says, “we can offer the convenience factor.”

The fact that McDonald’s is spending millions to encourage consumers to drink specialty coffees only helps, Beem adds.

“We’ll take a percentage of that share and be happy,” he says.

Like Emerald City, other smoothie chains also have begun to add coffee drinks to the menu.

Despite the growing availability of specialty coffees at quick-service operations, Starbucks chairman Howard Schultz continues to maintain that his customers are not trading down to McDonald’s or any other quick-service coffee source.

“Speculation that Starbucks is losing retail market share to competitors has been grossly exaggerated,” Schultz says, although the chain reported a 77-percent decline in profits in the second quarter, mainly because of charges related to store closures.

Still, analysts such as Sharon Zackfia at William Blair & Co. say they believe Starbucks has reached its nadir in terms of sales and earnings.

In a May report, Zackfia said Starbucks’ domestic sales trends have continued to stabilize or even modestly improve in the current June-ending quarter, despite McDonald’s “much feared” national advertising campaign for the McCafé rollout.

Countering what Schultz describes as the “misperception” that Starbucks only offers expensive $4 lattes, the coffeehouse chain in May announced plans to tweak pricing in some markets to better convey a value position, dropping prices on some popular items while increasing them on others in various markets.

Through June 29, Starbucks is offering a 16-ounce Iced Brewed Coffee for $1.95 at company-owned locations, a savings of 25 cents to 45 cents.

Joining in the discounting is Krispy Kreme, which this summer will promote both its Chillers line and its iced coffees. In July, participating stores in some markets will be offering a 99-cent iced coffee or tea, any size, with a coupon, says Brian Little, Krispy Kreme’s director of corporate communications.

The 8,800-unit Dunkin’ Donuts, a subsidiary of Canton, Mass.-based Dunkin’ Brands, slashed prices by about 15 percent in the New York tristate area in May, with prices ranging from $1.99 for a small hot latte to a large iced latte for $3.49.

In addition, some markets are offering 99-cent small lattes through Father’s Day on June 20.

Although best known for doughnuts, Dunkin’ Donuts derives about 60 percent of its sales from coffee and flavored beverages, says Michelle King, director of global public relations for Dunkin' Brands.

While Starbucks was closing about 800 stores and reporting same-store sales down 6.8 percent among the chain’s 7,000 domestic stores, Dunkin’ Donuts opened 1,300 new stores worldwide in 2008, and global systemwide sales were up 5 percent, King says.

The question remains, however, whether the increasing competition among specialty coffee players will cut into Dunkin’ Donuts’ market share.

“We can’t worry about what the competition will do,” King says. “We focus on our coffee and breakfast heritage and serving the best-tasting foods and beverages at a great value.” — [email protected]