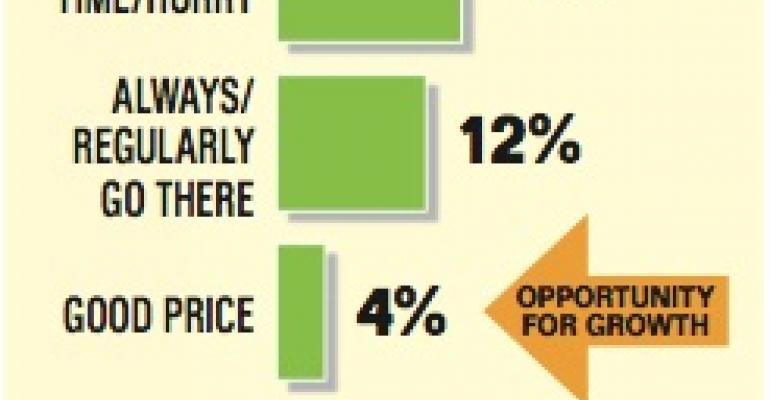 Business and industry operators are looking to climb out of the economic downturn by stealing a page from the playbook of their commercial restaurant competitors.

For the year ended September 2010, B&I traffic was down 16 percent. Port Washington, N.Y.-based NPD links the weakness primarily to the loss of
7 million jobs during the recession. And while the economy appears to be improving, unemployment is still lagging, and NPD predicts the B&I market won’t see traffic levels begin to increase until the rate of unemployment improves.

“Historically B&I suffers when unemployment is high,” said NPD analyst Bonnie Riggs. “I don’t know if people realize the magnitude that the employment situation has had on certain sectors of the industry.”

While unemployment is a key reason that traffic has been down at B&I, another factor is consumers’ overall dissatisfaction with the sector. Although B&I has significant advantages over commercial foodservice, including a lower price point and convenience, NPD data indicates that consumers are less satisfied with B&I cafeteria visits than they are with those to commercial restaurants.

For example, B&I lags commercial restaurant strengths relating to loyalty, filling special tastes or cravings, and the desire for specific menu items. The list also includes variety, service-related attributes and the availability of healthful options.
When it comes to offering a relevant menu, B&I also is behind, NPD found. For example, the most frequent menu item consumers order when visiting a restaurant is the hamburger. Burgers are four times as important a menu item at restaurants than they are at B&I cafeterias.

In addition, breakfast sandwiches are the third most frequently ordered item at restaurants, yet they don’t make the top 10 most popular foods at B&I cafeterias.

There also seem to be some underdeveloped beverage opportunities at B&I, most notably specialty coffee. Specialty coffees rank fourth in popularity at restaurants, but just eighth at B&I cafeterias.

“Consumers are less satisfied with B&I,” Riggs said. “They don’t have significant items or reasons people go there ... [so they] don’t have a lot of loyalty from that standpoint.”

Breakfast sandwiches — which have been a big traffic driver for commercial foodservice, quick service in particular — are an overlooked opportunity for B&I operators. Despite a shrinking commercial foodservice market, visits for morning meals have increased over the past five years, NPD found. Between 2005 and 2010 traffic counts grew 12 percent, driven entirely by quick-service outlets. Innovation and promotion are behind the growth, according to NPD.

“Morning meals account for one-third of B&I traffic, and there is sizable share to be gained through stealing visits from quick-service restaurants,” Riggs noted.
Despite its shortcomings, B&I does have some advantages over commercial foodservice. According to the data, convenience is the No. 1 motivator for consumer visits to B&I. Thirty-six percent of consumers surveyed said they visit B&I cafeterias for convenience reasons. Fifteen percent said they visit because they’re in a hurry or don’t have time to go elsewhere. Twelve percent said they visit because they regularly go there.

Another B&I advantage, especially with consumers still feeling the recession’s financial pinch, is the sector’s lower check average, NPD found. According to the data, the average check at B&I for breakfast and lunch is nearly $1 less than at quick-service restaurants. A morning meal at a quick-service outlet averages about $4.08, versus just $3.02 at a B&I location. Similarly, a quick-service lunch averages $5.73, versus just $4.82 for B&I.

In addition to dealing with fewer potential consumers in the buildings they serve, B&I also has had to adapt to a changing consumer demographic. The B&I sector typically attracts a diverse customer base, but high unemployment has shifted the demographics, NPD found. With the unemployment rate doubled from prerecession levels for all age groups — but highest for young adults — B&I is now serving meals and snacks to an older consumer than in prerecession times. Currently, adults 50 and older comprise 31 percent of B&I traffic, up from 27 percent prior to the downturn.

Many B&I operators are serving fewer consumers as a result of lower employment rates and are increasingly competing with a growing number of commercial operations, often located right outside their doors. Some operators, however, have found ways to keep traffic flowing by innovating or, in some cases, adopting strategies of their successful commercial competitors.

While it’s impossible to sell lunch to someone who’s not in the building, that hasn’t stopped Aramark from finding innovative ways to increase traffic at its more than 900 business dining locations, according to company officials.

Darden attributes the growth, at least in part, to several new initiatives. Among the most successful is the foodservice giant’s new dining club, launched as a test last spring and in full rollout this February. A voluntary online loyalty program, the dining club allows consumers to sign up and receive weekly special offers, Groupon-style deals and exclusive invitations to special dining room events.

In addition to the loyalty program, Aramark last year tapped into consumers’ growing interest in healthier fare through an exclusive partnership with Cooking Light magazine. At Aramark test sites across the country, the magazine’s latest recipes are brought to life and diners can order them, read the magazine, and take a copy of the recipe to try at home. The pilot has been so popular it will be rolled out as a promotional program in all locations this month.

“I think the idea of B&I as driven by convenience is archaic,” Darden said. “We need to run locations that are first and foremost delicious, fun to be in.”

While most B&I operators have suffered the last few years, New York City-based Restaurant Associates reports it actually has benefited.

“Initially [we] saw a softening of traffic and in spending,” said Edward Sirhal, RA president. “Today our spend in retail is higher than it was pre-2008.” He noted that there has been a consolidation of space in locations where RA has cafeterias.

Not satisfied with relying just on luck, the company also has continued to find innovative ways to engage diners, Sirhal said. While RA is focusing on a diverse array of initiatives — including meal deals, the rotation of offerings on a five-week cycle to avoid diner boredom, and hosting an Intranet site that promotes it all — the company has invested significantly in health and wellness efforts.

For example, this summer, in partnership with its parent company, Compass Group, RA launched Whole+Sum, a themed food station where diners can enjoy a variety of complete meals containing fewer than 600 calories.

“You can’t go to a typical restaurant on the street and get this kind of offering,” Sirhal said. “It’s an expensive upfront cost, but it’s paying off. Wherever we’re doing it, it has been a success. It brings in a whole new customer that we never had.”

For Rye Brook, N.Y.-based Flik International, keeping customers aware of what the company already offers — quality and value — is the strategy for keeping traffic positive at its more than 250 locations.

“Customers continue to seek out value but demand quality,” Flik senior vice president of culinary operations Bill Chodan said. “Our job is to effectively market and communicate value to our customers — to demonstrate competitive pricing and value meals while always delivering a quality product.”

To demonstrate the value of its on-site foodservice to customers, Flik implemented the Dare to Compare marketing campaign two years ago. An extension of Flik’s annual survey of surrounding venues, Dare to Compare is designed to ensure the company remains competitive and maintains prices between 5 percent and 10 percent below the street. The program is in part responsible for Flik same-stores sales increasing 7 percent in 2009 and remaining steady throughout 2010. Flik also has instituted a program to accept competitor’s coupons of equal value in its cafes.

“I do not think you can identify one specific initiative we have implemented over the past two years, more so [than]the partnerships we have developed over the years with our clients and customers,” Chodan said of the company’s success strategy. “We have been fortunate to maintain a 99-percent account retention through the past few years. This could not be achieved without our people, who are the backbone of our organization.”