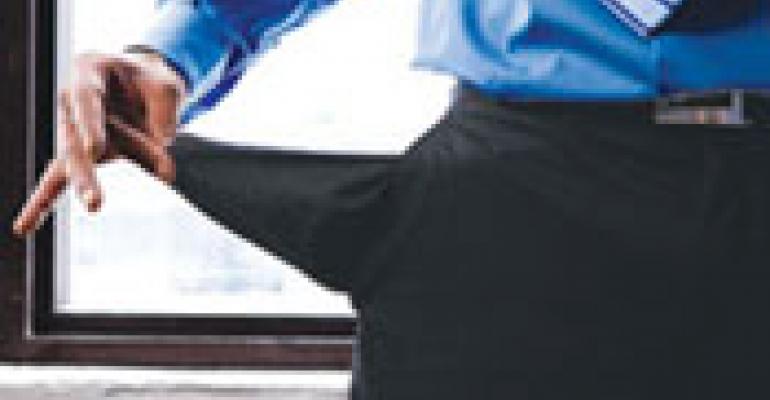 After filing for Chapter 11 bankruptcy protection last September, the owner and franchisor of the R.J. Gator’s Florida Sea Grill and Bar restaurant chain reportedly staged two auctions last fall in an attempt to sell off five corporate units in Florida. But there were no bids.

Owner J&D Restaurant Holdings, based in West Palm Beach, Fla., was forced to convert the bankruptcy from Chapter 11 reorganization to Chapter 7 liquidation in mid-December, closing the five remaining corporate locations and putting an estimated 142 employees out of work. About 11 franchisee operators of the brand remain open in Florida, North Carolina and Texas, but ownership of the franchise rights remains unclear.

That scenario is likely to be repeated in 2009, say observers, who note that the number of bankruptcies, especially the number of filings for Chapter 7 liquidation, will rise as the continuing credit crunch makes it harder for companies to finance reorganizations when they file for Chapter 11 bankruptcy protection from creditors.

Last year, Bennigan’s and Steak & Ale owner S&A Restaurant Corp., based in Plano, Texas, shocked the industry by skipping any attempt at Chapter 11, moving straight to liquidation. The seven-unit Boll Weevil chain in San Diego also liquidated in December, after years in Chapter 11.

“This is just the tip of the iceberg,” said bankruptcy attorney Jeff Pomerantz with Pachulski, Stang, Ziehl and Jones in Los Angeles. “We’ll see a lot more of this in all industries this year. The retail and restaurant sector will be demolished.”

Chapter 11 bankruptcy protection long has been a tool used by struggling businesses to reorganize debt and remain viable. When that doesn’t work, Chapter 7, or liquidation, is often the final step. But in today’s difficult economic climate, a general lack of liquidity is expected to significantly impact the wave of bankruptcies to come.

Without access to funding, bankrupt companies are likely to find themselves without the means to finance reorganization. Like R.J. Gator’s, many will find the sale of assets increasingly difficult as potential buyers struggle to find capital. At the same time, the market for debtor-in-possession, or exit financing, has shrunk, according to observers.

For the year ended Sept. 30, 2008, the number of business bankruptcy filings nationwide in all industries rose 49 percent to 38,651, up from 25,925 the previous year, according to the Administrative Office of the U.S. Courts.

Industry pundits say it’s impossible to guess how many Chapter 7 filings will occur in the restaurant world in 2009.

“It depends on how deep the recession goes, how weak some of these companies are and how long it lasts,” said Dean Zuccarello, principal of strategic advisory firm The Cypress Group.

These days, however, lenders and investors are a lot more sophisticated than they used to be, he added.

Some reorganization specialists, like Mullaney, advocate that companies take such steps as aggressively renegotiating leases and restructuring debt before considering bankruptcy.

“I always tell my clients to be wary of bankruptcy,” Mullaney said. “Once you go in, there’s no guarantee you’ll come out, and you need financing.”

Bankruptcy “is horrifically expensive,” Mullany added. “It’s not as simple as paying a bankruptcy lawyer $500 an hour. It’s a whole crew.”

In a typical bankruptcy case, the debtor might be responsible for paying the expenses not only of counsel, but also of the investment banker, real estate negotiators, as well as the creditors committee and that group’s lawyers and financial advisors, Mullaney said.

One company that may have benefited from an early-in, early-out bankruptcy strategy is Buffets Holdings, which filed for Chapter 11 protection last January and was one of the first large restaurant chains to take that step in the current recession.

The Eagan, Minn.-based company at the time was struggling to deal with heavy debt taken on to acquire the Ryan’s Grill chain in 2006, followed by weakened performance resulting from the economic downturn. Since 2007, Buffets Holdings subsidiary Buffets Inc. has sold or closed 121 restaurants, 83 of those while in bankruptcy, including units of Ryan’s, Fire Mountain Grill, HomeTown Buffet and Old Country Buffet. The company now operates or franchises about 560 restaurants.

In December, Buffets Holdings officials said they were amending the company’s debtor-in-possession financing agreement to secure funds through April 30, with a possible extension to May 31. Pending approval at a bankruptcy court hearing scheduled for February, the company is on track to exit bankruptcy protection in the first quarter this year with less debt and a streamlined corporate structure.

For restaurant chains, a huge benefit of a Chapter 11 filing is being able to walk away from leases among “dog” locations and “just operate winners,” said Craig Weichmann, managing director of the financial advisory firm Mastodon Ventures Inc. in Austin, Texas.

“Bankruptcy is such a scary word,” Weichmann said. “It’s looked at as a last resort. But if you look at it as a strategy, planned early on and with assistance, a lot can be accomplished.

“Don’t wait until you’re against the wall, like R.J. Gator’s, when it’s out of your control.”

Years ago, Weichmann represented a potential buyer who offered to invest significant capital into R.J. Gator’s when it was still owned by founder Tim Timoteo, then chief executive. As part of the deal, the investor wanted part ownership as well as a leadership role. However, Timoteo at the time did not want to lose equity, so he turned the offer down and, instead, took on more debt to survive.

“The moral of that story is that they waited too long,” Weichmann said. “Yes, in bankruptcy you could end up diluting your equity, but it also could be a way to stay in the game.”