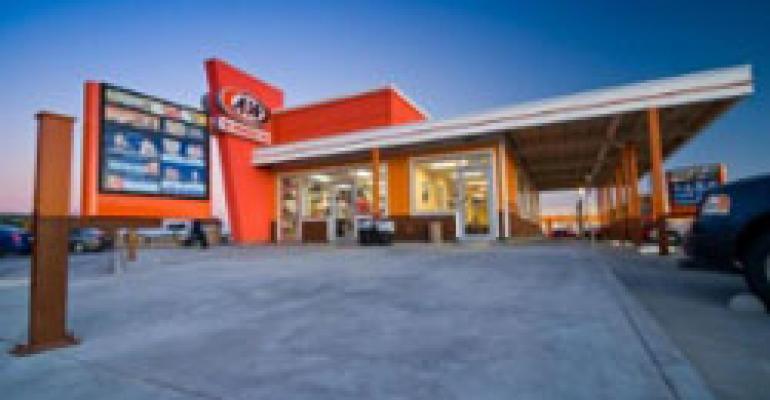 LOUISVILLE Ky. A&W Restaurants said Tuesday it would introduce for rollout a new prototype that for the first time combines a drive-in and a drive-thru with a dine-in restaurant.

Planning to pitch the new prototype at the International Franchise Association’s annual conference to be held Feb. 14-17 in San Diego, A&W, which is celebrating its 90th anniversary this year, calls the prototype the “Three D” experience: drive in, drive-thru and dine-in.

Five “Three D” prototype units were opened by franchisees in Wisconsin last year to test the concept. Though company officials would not release sales figures, they said they were very pleased with their performance.

Franchisees are planning to open another 15 such prototypes this year, mostly in Wisconsin, Michigan and Oregon, and the new prototype will be the format for all new A&W Restaurants going forward, officials said.

The move is a return to roots of sorts for A&W, which was founded in 1919 by Roy Allen in Lodi, Calif., specializing in root beer served in frosty mugs. Later, he opened a second root-beer stand in Sacramento, Calif., which company officials say was the nation’s first drive-in, with “tray boys” offering curbside service. Eventually, the brand grew into a full-service restaurant.

A&W grew to more than 2,000 units by 1960. The root-beer brand is now owned by Cadbury Schweppes PLC bottling company, but A&W restaurants are the only foodservice establishments licensed to serve A&W root beer on draft.

Louisville, Ky.-based Yum Brands franchises 1,012 A&W units in the United States, although about 650 are co-branded with the franchisor’s other concepts, such as KFC, Taco Bell and Long John Silver’s.

Another 362 A&W units are standalone restaurants. Of those about 150 have drive-in service. The rest have dine-in space, or drive thru service, or both.