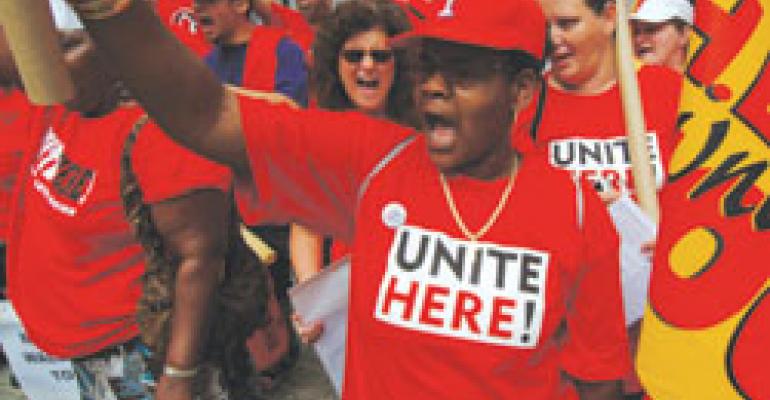 Unions and worker advocacy groups are using savvier, more aggressive tactics to broaden their ranks beyond the industry’s contract foodservice segment, and experts say chain restaurants could be their next targets.

Within the past year, such labor groups as UNITE HERE, the Service Employees International Union and the Restaurant Opportunities Center of New York have been involved in introducing restaurant-related labor legislation at the local, state and federal levels. They have also advised employees how to initiate tip-sharing lawsuits against employers, organized protests in front of restaurants, and instigated investigations into foodservice companies that allegedly resist negotiating new workers’ compensation contracts. Such activity has not been unexpected, however, since UNITE, formerly the Union of Needletrades, Industrial and Textile Employees, and HERE, the Hotel Employees and Restaurant Employees International Union, merged in 2004 with the stated goal of growing their membership.

“It’s probably true [that there has been more union activity in the last year than in previous years],” said Prof. Ruth Milkman, director of the UCLA Institute for Research on Labor and Employment in Los Angeles. “In the early part of the 20th century, in places like New York, San Francisco and even Los Angeles, there was more extensive restaurant unionism than in any other period.” But, she continued, now “there is some interest in trying to attack the restaurant industry. [Labor groups] are looking for new fields in general to conquer; they’re trying to expand.”

Milkman said chain restaurants could be the next targets.

“A lot of workers do want to be represented, so it’s a fight that will be fought over time,” she said. “It does seem like the large companies, like chains and contract companies, are logical targets.”

New York-based labor attorney Carolyn Richmond, a partner with Fox Rothschild LLP, said union activity has been more prevalent at noncommercial companies than independent restaurants because noncommercial businesses employ more people. Further, Richmond said, back-of-the-house workers in independent restaurants often are newly immigrated to the United States and may have come from countries where unions are not trusted.

“[Restaurants] have always been difficult to unionize,” she said. “Employees are typically averse to organizing—the front-of-the-house tends to be shorter-term and looks to maximize earnings in the short term. They’re not interested in paying dues, and a lot of their income is derived from tips. And many are often new to the workforce…and have no experience with unions.”

In the contract foodservice arena, UNITE HERE is openly pressuring Philadelphia-based Aramark Corp. to settle contract disputes. The union has persuaded both media organizations and politicians to investigate alleged mismanagement at several of the company’s accounts, including the Florida correctional system and the school systems of Philadelphia, Detroit and New Haven, Conn.

“What you are seeing is the union’s attempt to get involved in a bid decision with the New Haven public schools,” said Aramark spokeswoman Kristine Grow. “They are becoming more and more aggressive. The union also is trying to influence Detroit, so they’re saying things about procurement problems. They’re saying many different things, and a lot of it is just not accurate. The allegations concerning the Florida Department of Corrections business, all of that is not true either.”

Adriana Surfas, a spokes-woman for DeLauro, said all foodservice companies participating in the national lunch program are being investigated. However, she would not confirm the names of any other companies. The GAO also could not confirm that such an investigation was underway.

Aramark’s Grow said the company was unaware of the investigation and had not been contacted by the GAO.

Still, it is proposed legislation, including the federal Employee Free Choice Act and the Responsible Restaurant Act, introduced in New York City in late March, that continue to put the industry on alert.

At a City Council hearing March 31, ROC-NY and City Councilman Eric Gioia reintroduced the Responsible Restaurant Act, which would require restaurant owners to report alleged employment law violations to New York’s health department. The department would then be charged with publishing those violations in addition to the health code violations it already is responsible for posting. The bill was introduced about two years ago but never got out of committee. The legislation reportedly now has the support of some council members, but both the health department and the New York State Restaurant Association oppose it.

“There are already so many laws and vigorous programs in place where [labor] violations [are monitored and] issued,” said Chuck Hunt, executive vice president of the New York Restaurant Association’s New York City office. “Even the health department’s deputy commissioner testified against [the bill] at the hearing.”

Attorney Richmond said: “The bill attempts to link violations of wage-and-hour employment laws to health permits. It seeks to put the New York City health department in a position of a ‘superagency,’ above the department of labor, the EEOC, and any other agency or court typically vested with reviewing authority over these employment laws.… Even if it is passed, I don’t expect it would survive a legal challenge.”

Richard E. Rivera, president of Rubicon Enterprises, a Tampa, Fla.-based franchise company, and current chairman of the National Restaurant Association, said another pressing concern for restaurateurs is the Employee Free Choice Act. The proposed measure, which was introduced last year and is expected to be reintroduced this year, would eliminate secret-ballot voting in favor of card-check elections.

“Under this legislation, there’d be no election, no choice,” Rivera said. “And if you’re negotiating after having been certified to have a union, but can’t come to an agreement, a contract will be imposed upon you.”

ROC-NY co-director Saru Jarayaman said union activity per se has not increased, but said labor organizations are stepping up employee education. “We’ve obviously been involved with helping workers speak up,” she said. “There’s probably been an increase in people knowing their rights—that it’s illegal to work more than 40 hours a week and not [receive] time and a half. Employers are now starting to see those things are illegal.”