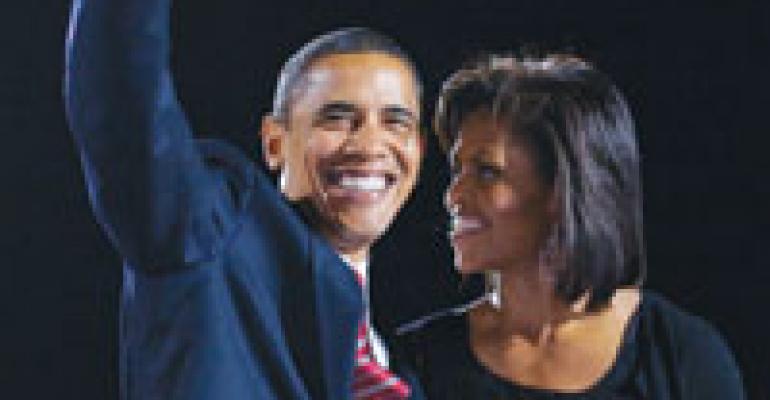 2008 The Year in Review: Legislative issues

The past year was a political wonk’s idea of heaven as the 2008 NATIONAL ELECTION CAMPAIGNS seemed to stretch on forever. Once the mud had settled, however, the world soon found that President-elect Barack Obama and the Democratic Party had won pretty handily, with the majority of the nation responding favorably to their message for change in the face of a global economic meltdown.

In the final reckoning, Obama had won with 53 percent of the popular vote and 365 Electoral College votes, compared with Sen. John McCain’s 46 percent of the electorate and 173 electoral votes. The Democrats picked up 21 seats in the U.S. House of Representatives for a healthy majority of 256 seats, while they won another seven seats in the Senate for a total of 58—just shy of a filibuster-proof majority, but a comfortable lead over the GOP’s 41, nevertheless.

Democrats also had a fairly good Election Day when it came to the gubernatorial races. They finished up with 29 Democrats in the 50 statehouses around the country.

Within days of the election, foodservice industry pundits began to speculate on what the president-elect’s first 100-plus days might look like, and they generally agreed that he would certainly have his hands full with the NEWLY DECLARED RECESSION. At the same time, they worried that his middle-class rescue plan, a centerpiece of his campaign platform, could encompass such business-unfriendly measures as union card check, a minimum-wage hike, paid sick leave and a national health care program with employer mandates. Meanwhile, few expect that federal immigration reform, a complex and highly sensitive measure supported by many in the foodservice industry, will come up on the docket soon. But given the uncertain state of the economy, it was anybody’s guess what might happen next.

Industry officials expressed hope that they might find a sympathetic ear with friends in the 111th Congress. This year a record number of congressional CANDIDATES WITH TIES TO THE FOODSERVICE AND HOSPITALITY INDUSTRIES were elected to office. Of the 28 incumbent or first-time candidates with some link to either business who ran for office, 22 won. Among them were Sen. Mark Warner, a Democrat who is co-owner of the Majestic Café in Alexandria, Va.; Rep. Parker Griffith, D-Ala., the previous owner of a chain of restaurants called The Mill Bakery; and Sen. Roger Wicker, R-Miss., whose father ran the Mississippi Restaurant Association.

The defeat of Ed Tinsley, a former chairman of the National Restaurant Association and owner of the K-Bob’s Steakhouse chain, proved to be one of the more stinging disappointments for the industry.

The foodservice industry took a proactive stance on the controversial MENU-LABELING ISSUE when it threw its support behind the federal Labeling Education and Nutrition Act. The LEAN Act, which has bipartisan support in the House and Senate, is seen as being more industry-friendly than another federal nutrition-labeling bill, the Menu Education and Labeling Act, sponsored by Rep. Rosa DeLauro, D-Conn., in the House and Tom Harkin, D-Iowa, in the Senate. The LEAN Act, if passed, would pre-empt state and local legislation, thereby avoiding a patchwork of laws around the country, while providing more flexibility in terms of menu and menu board labeling.

Meanwhile, the Philadelphia City Council and lawmakers from Westchester County, N.Y., passed menu-labeling laws in each of their jurisdictions. They joined other areas that have passed similar regulations, including California, New York City, and King County, Wash.

While no regulations have yet been introduced to regulate the amount of SODIUM in foods, many in the industry believe salt will be the next big ingredient flashpoint after trans fats. At the urging of the Center for Science in the Public Interest in Washington, D.C., the U.S. Food and Drug Administration held a public hearing to help determine whether salt should be regulated in food preparation. CSPI recommended that salt use in restaurants and prepared foods be halved.

Also, representatives of the foodservice industry met with New York Mayor Michael Bloomberg and other city officials to discuss ways of addressing the salt content in menu items.

The U.S. Department of Homeland Security issued what it has called its “final” revised proposal for its “NO-MATCH” LETTER REGULATION, and has asked a federal judge to speed up the schedule that could enable the rule to take effect by mid-January. Experts pointed out, though, that the new version contains little that is different from the original 2007 proposal. A U.S. District Court judge in San Francisco had issued a preliminary injunction blocking the original proposal, ruling that inaccuracies in the Social Security Administration’s database could end up punishing legal workers. The court also declared that the time frame was too short and that DHS had failed to follow due process in considering the rule’s impact on small businesses.

Milwaukee voters passed by 68 percent a measure that would require private employers in the city to provide one hour of SICK LEAVE for every 30 hours worked, for a total of up to nine days of sick leave per calendar year. The measure also said that employers with fewer than 10 workers would have to provide up to five days of sick leave per year. Passage of the law made Milwaukee only the third city in the United States to mandate paid sick leave. San Francisco and Washington, D.C., have similar laws on the books. The Wisconsin Restaurant Association together with other business groups plans said it plans to sue the city over the measure’s passage.