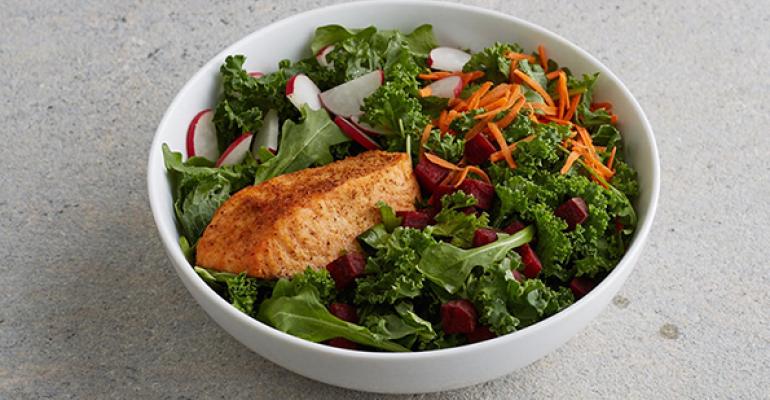 The latest funds will be used to support Sweetgreen’s continued expansion, which includes 10 new locations and additional restaurants slated for California, as well as investments in technology and supply chain.

“We believe Sweetgreen has the rare combination of mission-focused culture, excellent products and a strong business model that has the potential to create a market-defining category leader,” said Henry Ellenbogen, portfolio manager at T. Rowe Price.

Sweetgreen has become such a hot commodity that it was able to raise funds without even seeking them. Funds and accounts managed by T. Rowe Price led the current funding round, as well as Revolution Growth.

“This was very much an opportunistic round,” said Jonathan Neman, Sweetgreen co-founder and co-CEO. “We were not proactively seeking investment, as we just raised a round last year, but were given an opportunity to work with Henry Ellenbogen at T. Rowe Price, who we feel strongly aligns with our goals and values at the company. We’re grateful to be able to raise at a time when we weren’t looking for further venture backing, and his support serves as a vote of confidence that we’re doing things right.”

“We’re approaching this next phase of growth with the same passion and purpose we founded Sweetgreen on, and we’re honored to have the support of investors who believe in our mission,” Neman said. “As we continue to open new locations and grow into a national lifestyle brand, this funding will further enable us to innovate in technology and supply chain, to bridge the gap between health and convenience.”

Neman, Nathaniel Ru and Nicolas Jammet, friends from Georgetown University, founded Sweetgreen in 2007. The concept specializes in salads using local and seasonal ingredients, and is among the hottest chains in the country.

Sweetgreen has been growing quickly. Although most of its locations are on the East Coast, the company recently had a successful opening in Los Angeles that confirmed demand for the concept.

“The expansion has already been more successful than we anticipated, and the LA opening in particular was a sign to the team that Sweetgreen’s awareness is growing rapidly, and there’s strong demand in many markets,” Neman said. “So while we already have an aggressive expansion strategy in place, we’ll use this new funding to continue to ramp that strategy and enter new markets across the country.”

Earlier fundraising efforts have lured big names. Revolution Growth is an investment fund started by former America Online CEO Steve Case, who is a member of Sweetgreen’s board.

An $18.5 million round of funding last year included investments from restaurateurs Danny Meyer, CEO of Union Square Hospitality Group and the brainchild of Shake Shack, and Daniel Boulud, who has 16 restaurants. Gary Hirshberg, CEO of organic yogurt producer Stonyfield Farm, and Scott Belsky, CEO of self-promotion network Behance, have also invested in the company.