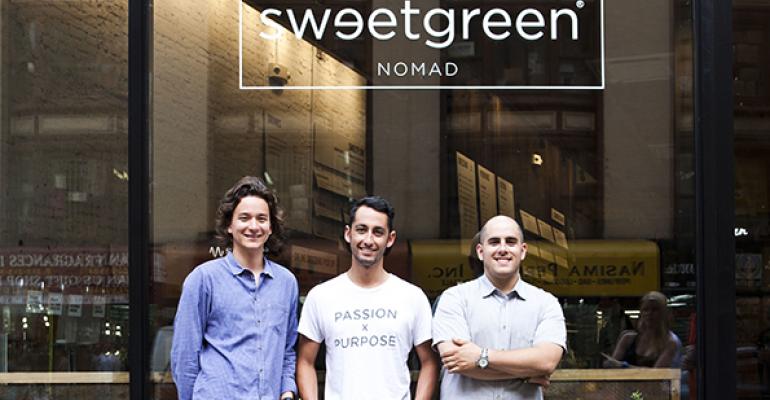 The chain&#39;s second round of funding will fuel its westward growth, technology and community efforts.

Jonathan Neman and Nathaniel Ru were on their way to a music show one day while at college at Georgetown University when they became frustrated at their inability to find a good place to get healthy food.

That frustration turned into an idea for a restaurant. They called their friend, Nicolas Jammet, and the trio spent a few months staying up late in their dorms writing business plans. They opened the first Sweetgreen in a 500-square-foot location in Washington, D.C., in 2007, just three months after the trio graduated.

“The plan was to open when we were in college,” Neman said. “But like every restaurant ever created we were late.”

Seven years later, their seasonal salad concept has become one of the hottest restaurant chains in the country, with 27 units and investors that include big names in the food and technology industries.

Earlier this week, Sweetgreen received an $18.5 million infusion to fuel its growth and enable the chain to continue to build on its technology and education efforts. It’s rare for a restaurant chain to receive venture capital, and for Sweetgreen this is the second round. The chain received $22 million last year from Revolution Growth, the investment fund started by former America Online CEO Steve Case, who joined Sweetgreen’s board.

Revolution Growth led the second round of funding, which also included investments from well-regarded restaurateurs Danny Meyer, the CEO of Union Square Hospitality Group and creator of Shake Shack, and Daniel Boulud, who has 16 restaurants.

It also includes Gary Hirshberg, the CEO of organic yogurt maker Stonyfield Farm, and Scott Belsky, the CEO of Behance, a network of websites and services specializing in self-promotion.

“Sweetgreen is quickly emerging as the place of choice for people looking for fresh, seasonal and locally sourced food — and in the process is building a lifestyle brand with meaning and purpose,” Case said in a statement.

Many of the chain’s investors in this round have become mentors to Sweetgreen executives. Hirshberg was an early investor and board member who introduced the founders to some influential people. Meyer — whom Neman calls “the Michael Jordan of food” — has also been a mentor. They’d known Boulud for years, and Case “challenges us a lot,” Neman said. “He’s really good about challenging us about thinking big and thinking long-term.

“We’re very fortunate to be surrounded by some really great people.”

Sweetgreen opened five locations in three new markets last year, including New York City, Boston and Philadelphia, two more expected to open by the end of the year. The chain is now targeting California, with two locations expected to open in Los Angeles early next year.

Neman would not say how many locations the company plans to open next year, but it plans to concentrate on existing markets and open in some new markets.

The chain has a new, seasonal menu of salads, soups and grain bowls that uses locally grown ingredients. It has relationships with 100 local farms, and plans to use the investment to optimize its supply chain and increase the number of farms it uses.

Sweetgreen’s uniqueness runs throughout the organization. Its Washington, D.C., headquarters is on a third floor and is called “The Treehouse.” Store managers are called “Head Coaches” and district managers are “Area Leaders.”

“Language is really important to a company culture,” Neman said. “We like to bring creativity to what we do.”

The chain has some unique marketing efforts. One of them is called Sweetgreen in Schools, an effort started in 2010 and run by an intern that has since grown to become what is now called a “top company priority.” So far, 17 Sweetgreen locations have adopted schools, and the plan is to have each unit adopt a school.

Those locations run a series of wellness workshops to teach children about the importance of eating healthy. So far, they’ve reached 3,000 students. “It’s huge,” Neman said. “There’s so much passion for the company behind Sweetgreen in Schools. We think this is how we can change the world.”

Another priority is technology. The company has a mobile payment and rewards app that was launched in 2013, and now accounts for as much as 25 percent of transactions. This month, Sweetgreen is piloting a mobile optimized online ordering system to be rolled out companywide by the end of the year. The company plans to build on those efforts with the investment, Neman said.

Perhaps the chain’s signature event is the annual Sweetlife Music + Food Festival, which dates back to the chain’s second location. It was struggling, and so the founders set up a DJ just outside the restaurant to play music every weekend and attract customers. It eventually evolved into an event after a local farmer’s market, and by 2011 had become a music festival featuring the band The Strokes and 15,000 people. Last year the festival attracted 25,000 people.

The festival serves healthful food and is “carbon neutral.” Proceeds go to Sweetgreen in Schools. “It extends beyond food,” Neman said. “We wanted to create this experience that’s the ultimate expression of the sweet life.”