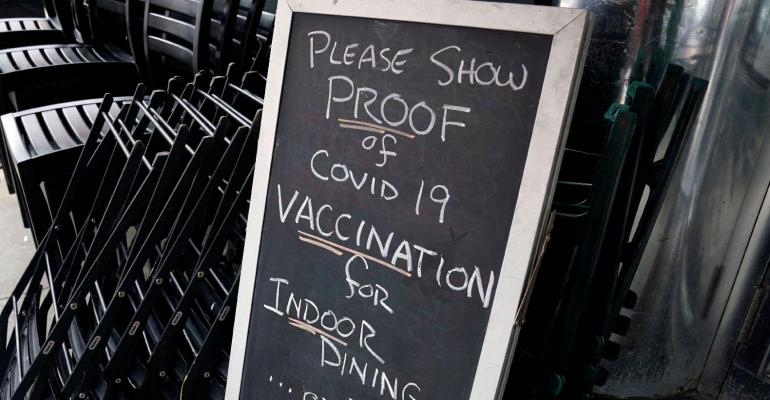 The new regulation will go into effect on Dec. 27, and vaccination proof for indoor dining now required for kids ages 5-11 starting Dec. 14

New York City Mayor Bill de Blasio just announced an upcoming list of new vaccination requirements for adults and children. Starting Dec. 27, the city will mandate employees of all private businesses to be vaccinated with at least two doses (unless choosing the Johnson & Johnson vaccine), which will affect roughly 184,000 businesses citywide.

Additionally, the previously announced Key to NYC program is being expanded: now children ages 5-11 will be required to show proof of vaccination at indoor dining, fitness and entertainment venues in the city starting Dec. 14.

“Risk rises as community transmission increases,” New York City health commissioner Dave Choski said in a statement. “Even before omicron becomes more common, we’ve seen case numbers grow in recent weeks due to delta, the devil we know. They have doubled since a recent low point in early November, increasing in every borough and every age group.”

Of course, it will be challenging for restaurants to continue to keep up with these changing requirements. Previously, President Biden’s vaccination requirements were extended to businesses with 100+ employees and most smaller businesses were exempt. Now in New York City at least, this will require mom and pop businesses to prepare for the next wave of health mandates.

“Public health and safety are paramount, but Mayor de Blasio’s announced expansions to the Key to NYC vaccine mandate pose additional challenges for an already beleaguered restaurant industry in need of tourism support and revenues this holiday season,” Andrew Rigie, executive director of the NYC Hospitality Alliance said in a statement. “U.S. families visiting New York City for scheduled holiday vacations may not be able to meet the vaccination requirements for children or themselves in time, and children aged 5-11 across the globe aren’t universally authorized to get vaccinated. Given the rapidly approaching holidays and considerable impact of the December 14 deadline, the proposal should be delayed until next year.”

The New York City Mayor’s Department has announced that more details on enforcements and other resources for businesses will be coming soon. New York City has frequently been a leader in COVID-19 restrictions and vaccination requirements, and attorney Steve Bell, a partner at international law firm Dorsey & Whitney, believes that more cities will follow suit with these stricter vaccination requirements both for employees and indoor dining/entertainment guests.

"Mayor de Blasio has made a bold move by mandating the sweeping coronavirus vaccine for all private employers in New York City,” Bell told Nation’s Restaurant News. “We can expect to see many other mayors and local governmental entities across the country follow his lead.  Of course, there will be resistance and no doubt legal objections.  However, the harsh realities of the seemingly more contagious omicron variant create an atmosphere in which aggressive measures may be required to halt the spread of the virus.”

Currently, many major cities like Chicago, Los Angeles and San Francisco have vaccine requirements in place for city workers but have not yet tried to enforce it for private employees.