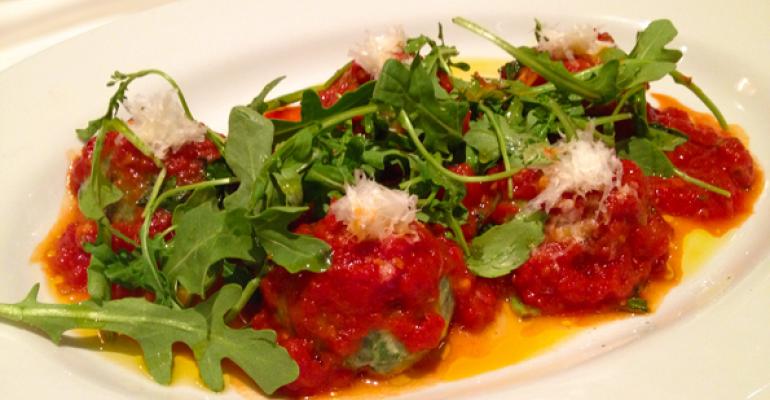 This gluten-free, low-carb dish by executive chef Brando d’Oliveira is his version of gnudi, or ricotta dumplings.

First, d’Oliveira chops equal amounts of spinach and Swiss chard and sautés them in brown butter, flavoring them with liquid left over from sautéing onions.

Next, he purées ricotta from Italy’s Bari region until it’s creamy, then adds both pecorino and Parmesan cheeses, along with the cooked spinach and chard and some egg yolk. He seasons the mixture with salt, pepper and nutmeg to taste, then hangs it in cheesecloth overnight to strain the excess liquid.

The next day he forms the mixture into two-bite balls and dusts them in rice flour. At service he cooks them in simmering water until they float to the surface.

The dish is plated with a tomato sauce made with Corbarino tomatoes, a type of tomato from Sicily, and fresh arugula for “a little freshness and bitterness,” d’Oliveira said, and grated pecorino cheese. The dish is priced at $21 at lunch and $27 at dinner.