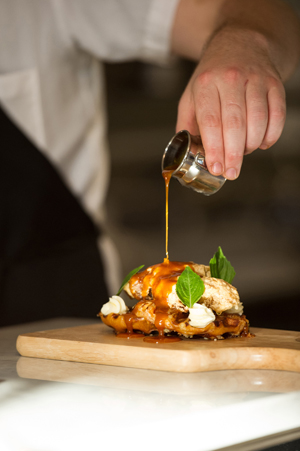 The New York Yankees received chef Shane Lyons’ chicken and waffles well when he cooked the dish for them, but he wanted something less mundane for his restaurant’s menu.

“I decided to do a dish that was more representative of the food we wanted to do and where our heads were at,” Lyons said.

Instead of chicken, he uses confit duck with the bones removed, breaded with a blend of Wondra flour, all-purpose flour and tapioca starch. He coats the duck in egg white, dredges it in the flour mixture again, and deep-fries it.

The waffles are made of brioche French toast, which Lyons cooks in a waffle maker instead of on a griddle.

An infused maple syrup with smoked Serrano chiles accompanies the dish. Puréed chiles are added to heated syrup, which is steeped and strained. Lyons pours the infused syrup over the duck and waffles and finishes the dish with honey butter and a garnish of Thai basil.

“It really changes the dish when you eat it with the basil; it’s not just for the color,” he said.

The item is available on both the brunch and dinner menus, priced at $21.