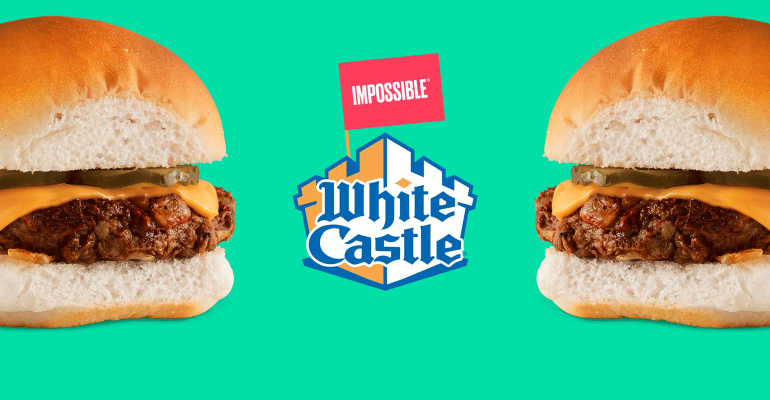 White Castle will debut the Impossible Slider — a variation on its iconic mini-sandwiches using the plant-based Impossible Burger — at 140 locations in New York, New Jersey and Chicagoland this Thursday.

The move makes the 400-unit hamburger chain, based in Columbus, Ohio, the largest restaurant group to serve the meat alternative.

“Innovation has been core to everything we’ve done at White Castle since our founding in 1921,” said White Castle CEO Lisa Ingram, in a press release. “The fact that we are the first fast food chain to offer the Impossible Burger to our loyal customers epitomizes our history of being on the ‘bleeding edge’ of a rapidly evolving industry.”

The Impossible Sliders will be topped with smoked cheddar cheese, pickles, onion, and served on the brand’s signature bun. Each slider will cost $1.99 and can be purchased as part of a combo meal.

The Impossible Burger’s creator, Impossible Foods, developed the “bleeding” burger — designed to closely mimic the texture and appearance of ground beef — from water, wheat protein, potato protein, coconut oil, and heme, a protein found in meat. The company’s goal is to create meat and dairy substitutes made entirely from plants, with a smaller environmental footprint than animal-based products.

“When we introduced our veggie slider and our black bean slider, we had customers coming in that don’t normally eat White Castle at all and were really excited to have vegetarian options at a QSR,” she said.

Ingram has not been afraid to mix things up at the nearly 100-year-old family owned business.

“We’ve done more product development in the last eight years than we’ve probably done in the last 80,” she said during the interview. “Most of those things are not products that we would have had 20 years ago but they are very, very relevant and desired by consumers today,” Ingram said.

According to Jamie T. Richardson, a White Castle VP, the partnership with Impossible Foods was a natural fit. “They’re relatively brand new and changing the world, and they remind us of ourselves in our youth,” he said.

“For us it’s about evolving taste and not just checking a box, but giving people different options,” Richardson said. “While the heart and soul of our business has been the original slider, customers are constantly telling us that they want more options.”