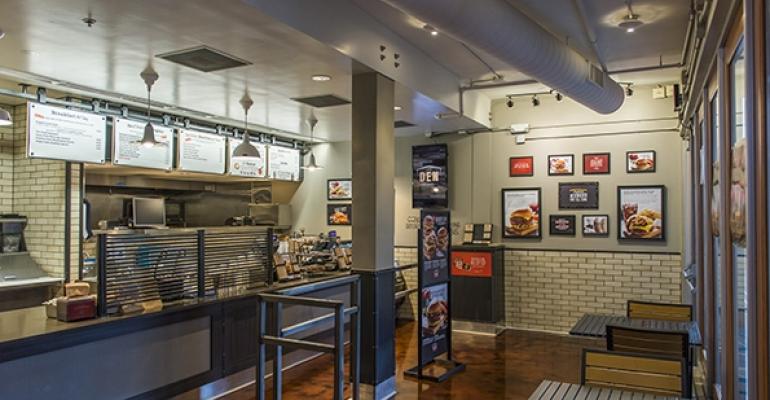 A picture-perfect restaurant design can go a long way to luring the sought-after Millennial consumers — both as first-time visitor and repeat customer.

Established restaurant brands like Buffalo Wild Wings and Denny’s are joining such younger concepts as LYFE Kitchen and Modmarket in creating décors to entice Millennials.

These restaurants are appealing to Millennials’ strong social drive with communal and movable tables for gathering, desire for food transparency with open kitchens, interest in sustainability with recycled and renewable materials, and attraction to quirky but functional décors with ample electrical outlets and even USB ports.

Operators’ designs on the Millennials are not misplaced, as these consumers — generally born between 1980 and 2000 — possess growing spending power.

“One of the largest generations in history is about to move into its prime spending years,” global banking firm Goldman Sachs said in a recent report. “Millennials are poised to reshape the economy; their unique experiences will change the ways we buy and sell, forcing companies to examine how they do business for decades to come.”

Restaurant brands are early in the adoption curve when it comes to figuring out how they can lure changing Millennial appetites as well as their expanding wallets.

One size does not fit all when it comes to attracting today’s younger customers. Dennis Lombardi, foodservice strategist with foodservice consultancy WD Partners, said: “One of the problems we run into is that Millennials are not a homogeneous group, from the age bracket to the income bracket to the educational bracket. There are a lot of differences.”

But one common theme was a heavy emphasis and interest in restaurant décor and how that affects the dining experience. WD Partners found in this year’s Consumer Picks survey, done in partnership with Nation’s Restaurant News, that Millennials weighed a restaurant’s atmosphere higher in importance when compared with baby boomers.

A look at five ways restaurants are capturing the Millennial zeitgeist, from Modmarket, Denny’s The Den and LYFE Kitchen.

Millennials love communal tables or furniture they can move around to accommodate social groups. Lombardi said restaurants need some sort of gathering place inside the restaurant to allow for easy socialization.

“That highly social drive is neither new nor unique – baby boomers had it 30-some years ago,” Lombardi noted. But because Millennials are currently at the social stage of their lives, allowing flexible seating areas will drive brand adoption. “If you can create it as an iconic element, so much the better,” Lombardi said.

Denver-based Modmarket, which was founded in 2009 and currently has 12 units, has increased its number of communal tables since introducing the idea in the concept’s second restaurant in 2011. Now, they are a distinctive element of the décor.

Part of the Millennial generation themselves, restaurateurs Anthony Pigliacampo, co-chief executive of Modmarket, and Rob McColgan, his business partner, are both 35, which is considered by most demographers as the cusp of the age group.

“We just did six tops, and we’ve seemed to add more and more large tables with each store,” Pigliacampo said. “The feedback has been positive, so we’ve added more.”

“A lot of the seating is about multi-levels, some low and some high, and group seating,” Powell explained. “You see groups of students pulling tables together and moving things around, because they want to be with their friends.”

Denny’s is looking for another near-campus location to accommodate a 2,500-square-foot version of The Den, Powell said.

Natural materials appeal to Millennials, who put a premium on sustainability, the environment and companies that care, or at least participate in initiatives that reduce business footprints. And restaurant concepts are learning how to tap into that trend.

LYFE Kitchen, which was named a Nation’s Restaurant News Hot Concepts award winner in 2014, features a number of sustainable elements in its design.

“We’re doing everything we can to be socially responsible and use recycled materials,” said Michael Donahue, who helped create LYFE Kitchen. “We use LEED lighting ... and renewable resources like bamboo tabletops. We use recycled water bottles for some of our cushions and furniture.”

At Modmarket, the concept founders made sure to use a lot of woods and kept elements simple, such as sealed concrete floors.

“Millennials care about whether it’s a real material or a laminate countertop,” Pigliacampo said. “Authenticity is real important. Fake wood paneling won’t work as well as real world. Make sure there is craft and attention behind it.”

Open ceilings are also an ecological friendly aspect of Millennial-focused restaurants.  “We like the idea of the open ceiling,” Powell said of The Den’s décor. “We don’t want to trap the space.”

Open kitchens are a common element in restaurant designs that appeal to Millennials, said Pigliacampo. Those and other freshness cues are part of what he calls “radical transparency.”

“Then you can watch your food being prepared,” Pigliacampo continued. “That transparency is the best marketing we can do, because it shows the customer that ‘Hey, what they are doing here is honest’ and you can see if it resonates with your values.”

LYFE Kitchen also has a very visible kitchen and a wall near the ordering counter that’s lighted and filled with live herbs, to reinforce the image of freshness.

“The Den is meant to be warm, colorful and youthful, but with some funky elements,” Powell said. “Denny’s is a heritage brand, so this is a real departure. We have funky wallpaper of a robot carrying food and a ‘deer couple’ with people in deer heads up for a night on the town. There’s also wallpaper with spacemen and kitty cats.”

Powell added that the design elements make the décor photogenic, so Millennial customers can share their experience on social media.

“It’s really to create conversation,” he explained. “Students are taking pictures of stuff on the wall and sending those pictures to their friends. From a pure design perspective, it’s about this warm place to be that’s a little bit eclectic. If you’re boring, you aren’t going to generate interest. If you have some funky quirks, that’s how the Millennials talk to each other. They are engaged.”

“In the media-saturated life of the Millennial,” he said, “we consciously think about whether someone will be taking an Instagram photo inside of our space [and] what … our restaurant looks like in that Instagram feed. We want it to say ‘Modmarket’ without the words showing in the picture. That’s more how a fine-dining restaurant might think about it. Millennials care about aesthetics.”

Pigliacampo said that’s also a reason he and McGolgan decided to use plateware and glasses rather than disposables. “They look better in a picture than plastics,” he said. “We try to play into the customers’ digital minds.”

Tied into those Instagram moments is the need for restaurants to be designed with good sight lines within the space, Lombardi of WD Partners said.

“Millennials want to know who is there,” Lombardi said, adding that those clear views across the room have a flip side: “The Millennial customers also want others to know they are there when they check in.”

Millennials have grown up with a variety of digital devices, and Goldman Sachs calls them “the first generation of digital natives.” So accommodating technology within the four walls of the restaurant is important.

In many newer restaurants from Buffalo Wild Wings — a brand that often appeals to Millennials because it offers a gathering spot for sporting events — table-height USB ports and electrical outlets are provided so that customers can recharge smartphones and other electronic devices.

Powell of Denny’s added that, “Millennials love to talk about where they are, where they are dining.” Many of those conversations occur on digital devices, he said.

“As long as you can create that conversation, you’re in a good place,” he said. “The design has to excite their imagination.”