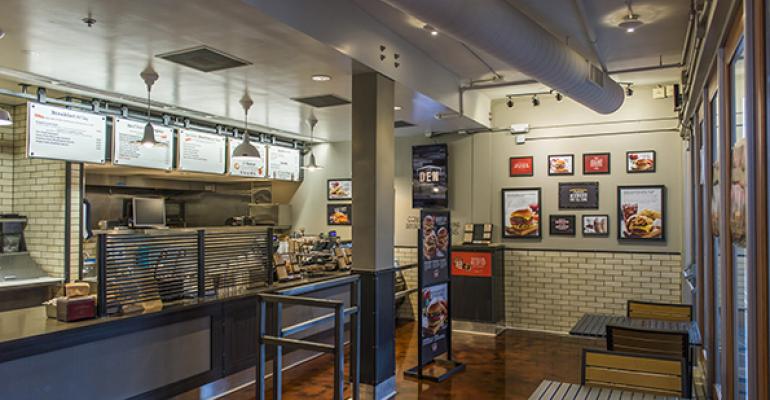 Denny’s targets Millennials with ‘The Den’

Denny’s may have found a concept that hits the sweet spot for Millennial diners.

The Den by Denny’s is a fast-casual concept that has evolved from locations the family-dining chain has on college campuses.

Last month, after reporting its highest quarterly sales in eight years, Denny’s president and CEO John Miller said franchisees are interested in opening The Den in off-campus spots that skew to a younger adult audience.

Greg Powell, Denny’s vice president of concept innovation, told Nation’s Restaurant News that the response to The Den indicates a huge opportunity for the Spartanburg, S.C.-based operator. But he hesitated to call The Den a fast-casual version of Denny’s.

“A lot of family-dining chains have tried to do fast-casual versions of themselves, with varying degrees of success,” Powell said. “We didn’t want to just do that. This is meant to be a concept we can take to Millennials, not only on college campuses but in urban centers and other places. It’s a Denny’s built for them.”

Denny’s has been working for years to update the image of its brand, which was born in 1953 as Danny’s Donuts in Lakewood, Calif. It became Denny’s in 1961.

Known for its Grand Slam Breakfast and 24-hour service, Denny’s has found success in reaching a younger audience in recent years by using edgy marketing campaigns and social media.

Web series like “Always Open” with David Koechner and the more recent cartoon “The Grand Slams” have gone viral. Menu promotions have linked the brand with “The Hobbit” movies and throwback Atari video games.

The menu features a line of Millennial-friendly breakfast burgers, which are available at all dayparts — as breakfast is at Denny’s.

The burgers are topped with traditional breakfast foods, like eggs and bacon, with “bigger, bolder flavors,” Powell said. For instance, the Huevos Crunch Burger is topped with egg, American cheese, sliced ham, grilled peppers and onions, and served on a brioche bun.

A line of street tacos and salads that trade on breakfast flavors is also in the works.

“It’s about taking some of the heritage of Denny’s and putting it back into the menu,” Powell said.

One of the few menu items The Den has in common with Denny’s is the classic Grand Slam Breakfast and its sandwich counterpart, the Grand Slamwich, items that Millennials are more likely to order at 10 p.m. rather than 10 a.m., Powell noted.

Denny’s currently has four locations on college campuses branded as The Den. Another 10 limited-service outlets on campuses are branded under the Denny’s All Nighter and Denny’s Fresh Express brands, both of which are also fast casual. The company is working with foodservice contractors to convert those units to The Den over the next 12 months, Powell said.

A franchisee opened the first off-campus location of The Den last month near San Diego State University. The 1,700-square-foot space has a large patio, and customers order at the counter.

The Den is also expanding at military bases. By August, three locations will be on military sites.

The Den has seen success at Fort Meade in Maryland, operated by the Army and Air Force Exchange Service. Two more locations are in the works.

The challenge is to maintain brand loyalty as college students graduate and grow older.

“If we can introduce them even to a different Denny’s, they will get the tie-in,” Powell said.

Powell said the company isn’t quite ready to roll out The Den as a franchised format, but there is a lot of interest from both foodservice contractors and traditional franchise operators to grow the concept.

“We want to make sure this is right,” Powell said. “We did this a little backwards in that most would go on the street first and then go into nontraditional. But this is what this demographic wants.”