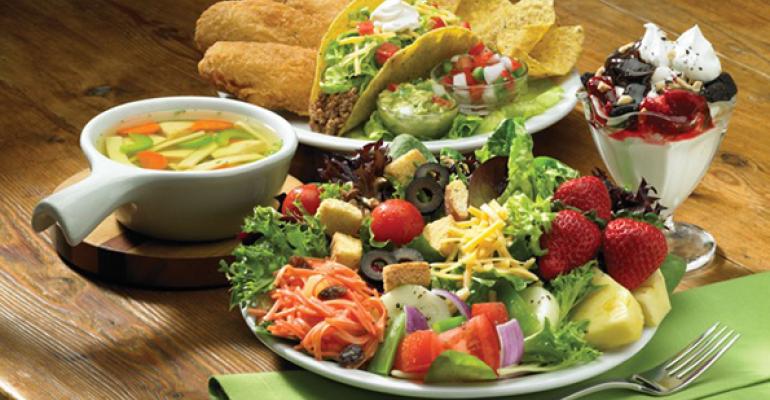 Consumers who dine in tend to spend more, The NPD Group finds

After years of grabbing and going, ordering delivery or eating at home, consumers are finally dining in at restaurants more.

According to the latest research from The NPD Group, dine-in, or on-premises, visits to restaurants grew 2 percent in 2014, in addition to 1-percent growth in 2013. Meanwhile, takeout, or off-premises, traffic declined 1 percent for each of the last two years. The new research was presented at NPD’s Foodservice Summit 2015 Get Growing Again—Inspiring Consumer Visits, held in Chicago on April 15.

Although the growth in dine-in traffic is small, the opportunity for restaurants is huge, officials at Port Washington, N.Y.-based NPD said.

“[Takeout] has been the growth driver for years,” NPD analyst Bonnie Riggs said. “To see dine-in grow, it’s quite a turn.” 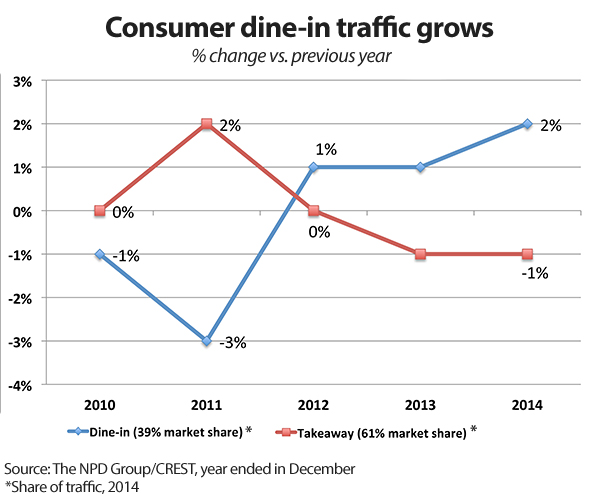 “We want to get more of that dine-in business. It’s more profitable,” Riggs said. “When you dine in the restaurant sales are much higher, you order more items.”

Quick-service restaurants experienced the largest growth in dine-in traffic, increasing dine-in visits by 5 percent in the year ended December 2014. Dine-in visits at casual-dining restaurants have been holding steady for the last year following years of decline.

No matter the segment, Riggs said a combination of the improved economy and “cabin fever” is driving consumers to dine in more.

“We want to be out and about,” Riggs said. “That’s not just young people.”

According to NPD’s Foodservice Summit Dine-in Study, consumers of all ages are eating out to get out. For some consumers, dining in is a chance to get out and be social. For others, it's a chance to spend time with family. Younger consumers want the convenience of avoiding meal cleanup, while those over 50 seek the pleasantries of eating away from home, including not being rushed.

Of all the segments, consumers surveyed ranked casual-dining restaurants strongest when it comes to meeting the dine-in demands of good tasting food, good service and convenience.

While there’s a big opportunity for growth in dine-in traffic in casual dining, operators’ responses to consumers’ new dine-in needs has been varied, ranging from some brands that have made minor menu tweaks or begun offering a heavy rotation of combo deals, to others that have completely evolved the restaurant experience. The Melting Pot and Sizzler share their responses to consumers’ new needs and the positive results so far.

In 2011, the 165-unit fondue chain began making radical operations and menu changes that have resulted in increases in sales, traffic and frequency of visits, as well first place in NRN’s Consumer Trends Picks 2015 survey.

Mike Lester, president of The Melting Pot, credited the fondue restaurant’s success to its commitment to exceptional food and beverage, generous hospitality, immaculate environment and happy team members, but also to listening to its customers.

“We are listening to our customers and reacting to what they are telling us more than ever,” Lester said. “Our reactions are much bolder and rapid.”

To find out what customers wanted, the Tampa, Fla.-based chain conducted intense focus groups a few years ago with current and lapsed customers, and those who had never tried to the brand before. What they learned was that the majority of consumers wanted more reasons to visit The Melting Pot more often than just for special occasions. Soon after, the chain expanded its dining experience from its fixed four-course fondue dinner for two to a more customizable menu and experience. It also increased communication and training to provide its servers and managers with more tools to deliver individualized hospitality.

“Consumers don’t want to be boxed in,” Lester said.

To bring more customers into its restaurants, Mission Viejo, Calif.-based Sizzler has spent the last few years remodeling its locations and broadening the options of how consumers use the brand. For example, not so long ago the steakhouse offered a single type of full-service dining experience. Today it appeals to its diverse customers with fast-casual-like seating options, a premium salad bar and a broader main menu, all of which facilitate a more customizable dining experience.

To support these new options, Sizzler has increased the focus on training its servers, ensuring they aren’t just food runners, but menu experts who provide just the right amount of engagement to each individual customer.

“At the end of the meal, it’s not just satisfaction with food,” Kramp said. “It’s the whole experience.”

The steakhouse chain’s efforts to improve the overall dining experience, while still allowing customization, have earned it a broader customer base and increased frequency of visits, according to Kramp. Up next for the continually evolving brand is a gourmet tossed salad station, currently in the early stages of development.