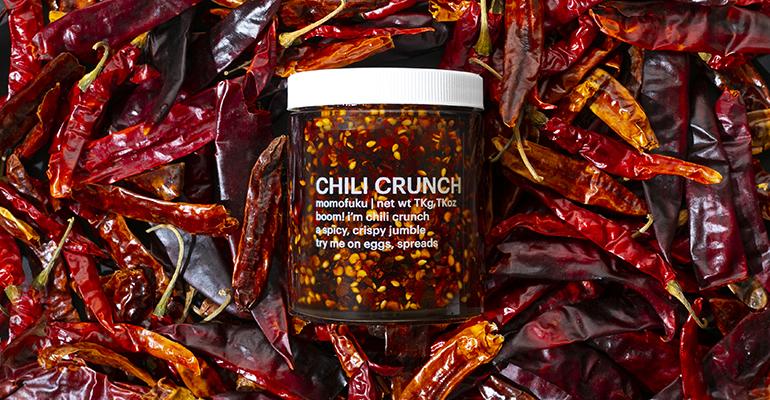 Andrew Bezek
Customers have been placed on waiting lists for popular items from Momofuku such as its Chili Crunch condiment.
Consumer Trends

Restaurateurs have learned over the past year that they need to find new ways to make money other than crowding guests into their restaurants.

Besides delivery, which they got better at, many figured out how sell other services, like teaching remote cooking classes and wine pairings, for example. Many others also got involved in retail, which can be great for marketing as well as generating extra revenue.

This relatively low-labor approach to staying in touch with guests — and selling them the food that they wanted — happened initially out of necessity early in the pandemic, when supermarkets fell short on supply of some products and restaurants, with distribution channels that weren’t connected to retail, had surpluses.

“We had a cellar full of wine and an aging room full of beef and no customers to sell to,” said Amy Zhou, general manager of Cote Korean Steakhouse in New York City.

So she turned the space into a wine and butcher shop, where guests could buy raw meat to cook themselves.

Once that was up and running Zhou realized there was demand for those steaks, and she started shipping nationally via the food e-commerce platform Goldbelly.

Goldbelly soon became partners with chefs around the country. Customers could buy bouillabaisse kits from New York City chef Daniel Boulud; cheeseburger kits with all the fixin’s from Gott’s Roadside, a cult favorite based in St. Helena, Calif.; lamb shoulder from Zahav in Philadelphia and other products from dozens of other restaurants.

Others have taken on those sales for themselves, such as Landry’s Inc., the parent company of many high-end restaurants, which last August launched Landry’s Kitchen, a web site for selling steak and seafood from The Oceanaire Seafood Room, Morton’s The Steakhouse, The Palm, Vic & Anthony’s Steakhouse, Mastro’s Restaurants, Del Frisco’s Double Eagle Steakhouse and Chart House for customers to cook at home.

Partner Kelly Clancy said the idea came from the success of the sales of RPM Steak Salt, which appealed to customers who suddenly had to fend for themselves in their own kitchens.

“As the demand grew, we wanted to be able to facilitate for our guests to be able to experience the RPM brands that they know in their own kitchens,” Clancy said via email.

They started by offering tomato and Bolognese sauces as options on their delivery platforms, along with their regular menu items, and saw that people were ordering 16 ounces of sauce at a time. 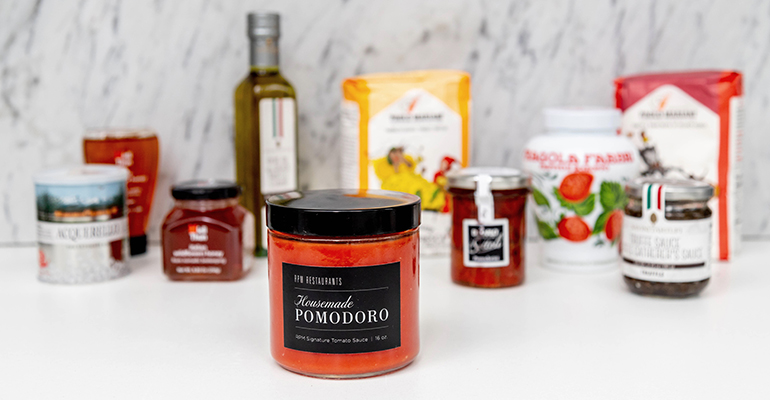 RPM Italian in Chicago found a ready market for its sauces among customers who had shifted to cooking at home.

“Now, with the RPM Italian Chef Curated market, we not only incorporate our house-made sauces and fresh pastas, but we also allow guests to purchase some of our greatest hits, like the Prime Beef Meatballs and Lobster Ravioli, so they can now easily recreate these items,” Clancy said.

Zachary Engel, the executive chef and partner of Galit, a modern Middle Eastern restaurant in Chicago, started on a smaller scale, and, like Cote, it was sort of out of necessity.

Engel needed to find something to do with his excess hyssop. He uses it in his za’atar herb blend, and the farmer who grows it for him relied on Engel to buy it.

So he started selling it on Galit’s web site, along with the spicy North African condiment harissa, “because it’s super easy and a lot of other chefs were selling hot sauce,” Engel said. 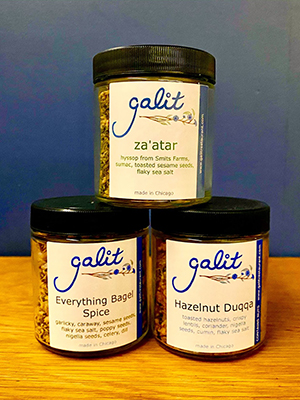 Soon he was selling those items along with hazelnut dukkah and “everything bagel” spice via their web site under the moniker Shuk, which is Arabic for “market.”

Photo: The spices that Galit in Chicago sells via local merchants and mail order bring in new customers as well as extra money.

Once a week his manager sends out the mail-order packages, but a lot of the spices are ordered via takeout, adding to incremental sales, “and it’s an easy additional click online,” Engel said.

Galit’s spices are also sold at Daisies, a restaurant in Logan Square that had converted some of its space to a marketplace on Sundays early in the pandemic because the farmers market had closed, and through a farm coop in Chicago through which he also sells his labneh, a type of fresh cheese, and ezme, a Turkish salad of tomato, eggplant, peppers, walnuts and pomegranate.

“It’s stuff we already make, so it’s not a lot of extra effort,” Engel said.

He said that although sales aren’t huge, “it does help,” as does the added exposure to customers who might not be familiar with him.

“That’s become more of it than I thought it would be,” Engel said. Offering these retail goods via different channels “has been more about expanding our customer base than anything else.”

The chain’s retail items, available for shipping nationally, including its seasoned salts, its crowd-pleasing Chili Crunch spice and its tamari and soy sauces, are prominently displayed on its web site along with its restaurants. They have sold out of items more than once, and have created a waitlist, just like for their restaurants in happier times, that now accounts for “a huge percentage” of sales, Mariscal said.

But they started in a “culinary lab,” the group’s test kitchen where they developed items like their soy-free sauces, but only for sale to other restaurants, because they had limited capacity. Then they started working with co-packers to manufacture their products, and started offering direct-to-consumer products in September. She said those products started contributing to the bottom line “from day one.” 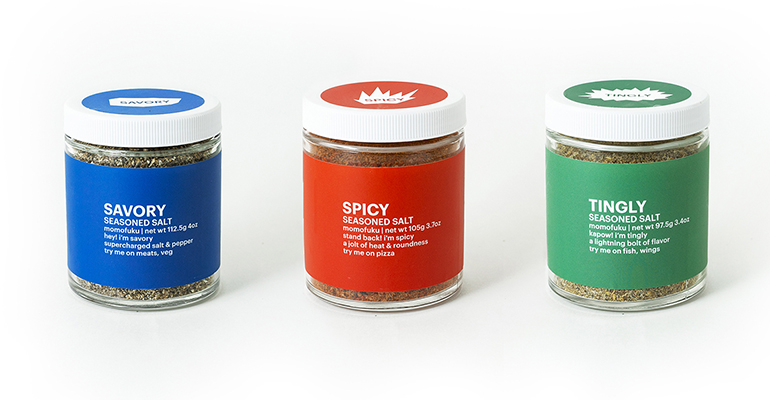 The Momofuku Group, based in New York City, which sells its signature seasoned salts among other consumer packaged goods, had made plans to launch retail goods even before the pandemic struck.

Mariscal said all restaurants should be looking at other ways of making money, and that she and Momofuku’s famous chef and founder, David Chang, had plans for that before the pandemic started.

“Dave and I set a goal in 2019, when I took over as CEO, to have within five years 50% of our income not come from restaurants,” she said. “Because we knew, to survive as a restaurant group, we had to start looking at other avenues as well, and the pandemic obviously accelerated that timeline of really pushing forward non-restaurant projects, which have really helped out over the past year and put us in a position where we can reopen.”

She said all of the consumer packaged goods continue to be works-in-progress, with her development team working with the copackers to improve the packaging and the flavor based on feedback from customers.

“Even if in-restaurant dining isn’t happening, we’re still having a very direct relationship with our guests. It’s all just taking place virtually. But that’s been a really interesting learning experience.”

Retail was part of the business model of Rolo’s in New York City, which opened in the Queens neighborhood of Ridgewood, N.Y., in January, when indoor dining was completely closed in the city.

“It became part of the business plan mid-summer, when we realized we’d be opening and not able to do indoor dining” said Ben Howell, who’s in charge of the restaurant and market’s beverage program. Howard Kalachnikof, Rafiq Salim and Paul Wetzel collaborate on the food, which reflects their own experiences and the melting pot of cuisines that New Yorkers like to eat.

“Our thought process was to make sure we were opening with a model that would work no matter what the COVID dining situation was,” Howell said. “We didn’t want to move forward not knowing if we’d be able to do full-service dining and then have the rug get pulled out from underneath us. So the idea was to try to share as much of our cooking as possible in a grab-and-go-retail setting.”

“Everyone had their three-month period where they were fostering their sourdough starter and making complicated recipes at home, but three months later they were like ‘I don’t want to do dishes anymore. I don’t want to spend my day tinkering with a Dutch oven,’” Howell said. “I think that by the time we opened, the idea was, let’s cook for you. And people came in and got some made-to-order food, but they also would leave with some fresh pasta and sauce, a pack of bacon, a couple of prepared salads and some condiments and maybe a flat of eggs, and it just took a little bit of a load off of eating at home.”

Not having retail experience, they simply priced the items the way that they, as customers would like to see them priced. 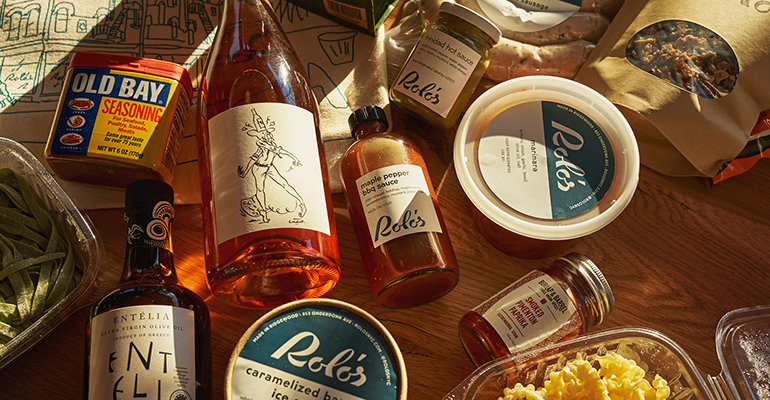 Rolo’s, in the Queens neighborhood of Ridgewood, N.Y., changed its plans before opening in January to include a retail section in response to pandemic-related restrictions.

“We’re hoping that as we dial things in and figure out our business more that we’ll figure out the costs,” Howell said.

Kalachnikof said that one of the surprise successes were the beverages, from Howell’s eclectic wine selection and prepared cocktails to beer — both 12-packs of mainstream lagers and curated selections of local IPAs.

Soft drinks, too, ranging from mass-market soft drinks to “San Pellegrino red bitter soda that you can’t find anywhere,” Howell said. “That mix has served us really well, I think.”