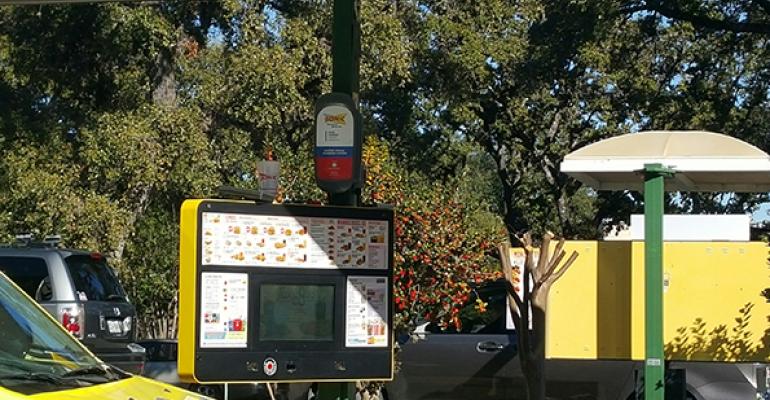 Some restaurant brands are installing charging stations for electric vehicles.

Maryville, Tenn.-based Ruby Tuesday Inc. on Thursday said it was set to open a series of Tesla Supercharger Stations at its units, with the first debuting in at a location in Miner, Mo.

Oklahoma City based Sonic Inc. over the past six month has been piloting charging stations at drive-in units in Boerne, Texas, and Westminster, Colo.

A Sonic spokesman emphasized that the electric vehicle (EV) chargers are a pilot project. “Each location has two chargers with 40 amps each,” he said, adding that the sites were selected because the surrounding areas had a higher percentage of electric vehicles than others.

Ruby Tuesday said it had other locations for the Tesla chargers, which can only be used by the high-end car brand, either planned or under construction.

“We’re thrilled to partner with Tesla Motors to offer our guests a place where they can charge their Tesla vehicle while enjoying a delicious meal,” said David Skena, chief marketing officer of Ruby Tuesday, in a statement.

“Expanding the Supercharger network to include Ruby Tuesday is good for both Tesla owners and our restaurants alike,” Skena said.

“We look forward to deepening our relationship with Tesla and opening additional Supercharger Stations in Ruby Tuesday markets around the country in the near future.”

Superchargers allow Tesla drivers to travel up to 270 miles, take a dining break at Ruby Tuesday and get back on the road at full charge, the company said.

In addition, Ruby Tuesday said the Supercharger Station at the Missouri location is hosted on Tesla’s interactive webpage and in-vehicle navigation.

A Sonic spokesman said the drive-in chain is also testing other energy-efficiency projects.

“In addition to EV Chargers, Sonic is also currently exploring the use of solar panels with a pilot at a location in San Antonio, Texas,” he said.

Sonic’s drive-in model allows solar panels on the canopies above the auto stalls, he said.