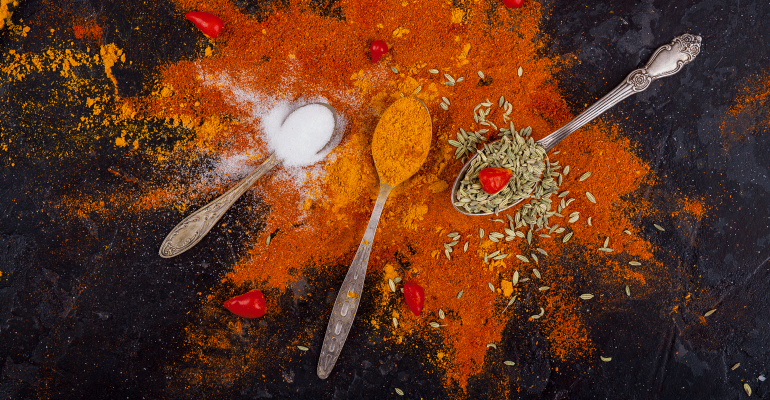 Restaurant menus have been rapidly getting hotter, spicier and more garlicky while featuring flavors from a wider variety of cuisines, with no signs of slowing down anytime soon.

Among the top-growing spices and seasonings being shipped to independent restaurants and other foodservice outlets are tikka masala and yellow curry blends, as well as chile peppers such like Aleppo and habanero.

“The more esoteric the variety of peppers, the better today,” Portalatin said.

Additionally, shipments of hot sauces are also growing by double and triple digits.

Other flavors poised to become recognizable names on menus include sambal, a category of chile paste popular in Malaysia and Indonesia that grew by more than 400% in the 12 months ended May 2018. During the same period, harissa, a smoky and spicy North African chile paste, grew by nearly 200%; and red Baja, a Mexican dry rub made with spices including chile and garlic, grew by 120%.

Consumers’ affinity for flavors and dishes rarely seen in the American mainstream in the past can be attributed to their changing tastes, as is evidenced by the fact that 75% of adults in the United States, especially young adults, are open to trying new foods, NPD found.

Among those most open to new foods and flavors are members of Generation Z (born 1995-2012), a group that is all about new flavors and experiencing tastes in new ways.

“They’ve grown up with access to the world in the palm of their hand with a smartphone,” said Portalatin. “[This is] a generation that just expects to explore the world through food.”

A lot of the innovation around lesser-known spices and dishes is coming from smaller, chef-inspired concepts, a group Portalatin likes to call “the creative class” of the foodservice industry.

“Eventually these flavors will spread,” he said.

Chef Zov Karamardian is among the restaurateurs who can attest to the spreading of less familiar flavors and the positive impact it has had on business.

When Karamardian first opened Zov’s, a Mediterranean bistro in Tustin, Calif., in 1987, she put a glossary of terms on each table to explain spices that were unfamiliar to most of her customers, such as cumin and Aleppo pepper, and spice blends such as green za’atar, in her food. Now, with four locations and a fifth forthcoming next year, the glossary is a relic of the past.

“Customers recognize our menus,” Karamardian said. “They crave what we do.”

Today, one of the most popular dishes at Zov’s is her seafood tagine, made with New Zealand green lip mussels, Manila clams, scallops, salmon, Israeli couscous and spicy tomato saffron broth made with Aleppo pepper, garlic and shallots.

“People are liking spicy food,” she said regarding the tagine’s popularity.

About her customers’ growing acceptance of these once-foreign spices and flavors, Karamardian said, “They’ve changed because a lot more have been traveling around the world. The fabric of the people have changed; everything is diverse.”

But while “spices are everything” for Karamardian, she says subtlety is important as well.

“If I eat something, I don’t want to recognize what’s in it,” Karamardian said. “I just want it to taste good.”

Pickled Monk’s menu draws on a variety of cultures and cuisines and uses everything from the now-popular Korean condiment of fermented chile, gochujang, as well as habanero pepper and more on-the-rise spices, such as sumac.

Fune is a huge fan of sumac, a versatile Middle Eastern spice with a tangy, citrusy flavor, because it lets him “play with another flavor that’s not sweet, garlic or spicy.” He is currently using it to add a pop of brightness to his chicken flatbread sandwich, which is made with sumac-spiced chicken shawarma, naan, lettuce, tomato, red onion, feta and the yogurt-dill sauce tzatziki.

Also on the menu are appetizers of Brussels sprouts with bacon-gochujang jam, honey and blue cheese, and fried chicken and doughnuts, a dish of chicken fritters, sugar-dusted beignets, spicy buttermilk pickles and habanero maple syrup. He has a house-made “tangy-nero” sauce made from bell and habanero peppers.

In addition to offering flexibility and fun, the ethnic spices also hold up really well with the restaurant’s many India Pale Ale beers.

“Some people bring their food right up to the tap,” said Fune. “It’s fun to see people geek-out on flavors.”