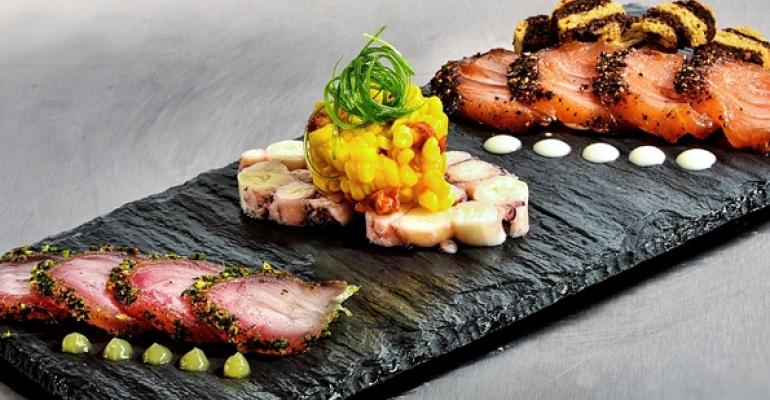 If you want customers to buzz about your restaurant’s appetizers, give them charcuterie or ceviche. Want guests to be excited about fish? Try tuna. And no matter what sort of savory dish you offer, it’s likely to be talked about more if you add bacon to it or put an egg on top.

That’s what the latest data on online restaurant reviews indicates, according to newBrandAnalytics.

The firm uses what chief executive Kristin Muhlner calls “deep text analytics” to determine whether the commentary indicates that the customer would return to the restaurant or recommend it to others. NewBrandAnalytics further examines those comments to see what dishes or ingredients were mentioned positively.

“The food and beverage industry is not unlike the fashion industry in that trends come in and out of fashion, and they often start at the top,” said Muhlner.

However, to make sure the data aren’t skewed by the selected trendy restaurants — or by a small number of chefs getting excited about a particular ingredient unlikely to gain followers elsewhere — they check it against the menus of about 100,000 restaurants worldwide.

“It’s not a menu analysis but a loyalty analysis of dishes and ingredients,” Muhlner  said.

In the appetizer category, four of the five most frequently mentioned items are new to the list, including charcuterie, burrata (a mozzarella ball stuffed with cream and shredded mozzarella), deviled eggs, and zucchini cakes or breads. Ceviche fell from second to third place.

Just as charcuterie came from apparently nowhere to top the list of starters, eggs and egg yolk skyrocketed to first place in 2013, among ingredients mentioned anywhere on menus, displacing truffles. Bacon held steady in second place, and pickles remained at fourth place. Yogurt rounded out the top five.

Other ingredients that popped in popularity but didn’t break into the top five were Sriracha sauce and kimchi.

In the vegetable category, brassicas came on strong, with Brussels sprouts supplanting asparagus as the most buzzed-about green. Asparagus fell to number two, while cauliflower and kale hit fourth and fifth places. Beets held third place.

In the bread category, biscuits were the most buzzed-about item, followed by “toasts,” — mostly starters of toast points topped with savory elements such as chicken liver, mushrooms or bone marrow. Flatbread, which topped the list in 2012, fell to fifth place, behind rolls and sourdough.

When it came to seafood, lobster stayed at the top of the list, but crab entered the top five in second place. Oysters jumped from fifth place to third, passing shrimp, which fell from second to fourth place. Mussels rounded out the top five, while octopus and scallops fell out of the top five.

Correction: Feb. 24, 2014 A previous version of this story said shrimp moved from fourth place to second place on the list of most buzzed about seafood, rather than the other way around.